Aggy-jagger. When the lake is cold, the sun warm, and the wind calm, a mist climbs over North House. The sounds of summer visitors which usually ring out across the bay fade into gray, wet echoes. At times, the mist will thicken up so close that you can hardly see three steps ahead. This is the aggy-jagger: a South English word for the sea-mist that climbs on shore and shrinks the world.

If you are bold, you can row a boat out into the aggy-jagger. There is nothing quite like a few hours floating around the bay on a calm day, and I am especially fond of losing myself in the mist. Alone in the waves with only the glimmer of the lighthouse to keep me company. I highly recommend the experience.

North House has not had classes or events on campus since mid-March, and I've gotten used to the solitude. Now that the campground is filling up and the dogwalkers are meandering through our slice of shoreline, I find myself seeking that solitude we unexpectedly enjoyed throughout the spring of shutdowns. There is the exhilaration of zwer in my heart - another South English word, this time from Exmoor, meaning the sound and action of a group of surprised partridges breaking cover and fluttering into the sky. Walking along the trails up on the North Shore I've inspired plenty of zwer. My footsteps are a sudden reminder to the pheasants and turkeys and pigeons and seagulls that, yes, people are still here, and they will walk through your home. Please excuse me.

I must admit I'm cheating here with these new words, aggy-jagger and zwer. Because of my other blog posts on the vocabulary of craft, master felter Elise Kyllo has lent me a brilliant book on English wilderness vocabulary: Landmarks by Robert MacFarlane. The library here in town is still closed to walk-ins, so between us North House folk there has been plenty of book-sharing. You don't always realize your thirst for a good story until the well dries up.

It is a chaotic time, even here in Grand Marais where we are cocooned by distance and wealth and leisure. Our land of ten thousand lakes is burning and angry and swirling with the mixed fear and hope of revolution. It is hard to see many steps ahead, and it is hard to see one's place in a story that stretches so wide across the land and so far through time. Stay home, out of compassion for those most at risk from COVID-19? Or go into the streets, out of compassion for those most at risk from the brutality of the police? Give money to black leadership and indigenous solidarity or save your resources for yourself in case things get worse? Stay in your city or go somewhere remote? The aggy-jaggers of confusion and chaos have rolled in, and future possibilities which were once clear and bright are now impenetrably wet, gray, faded echoes. 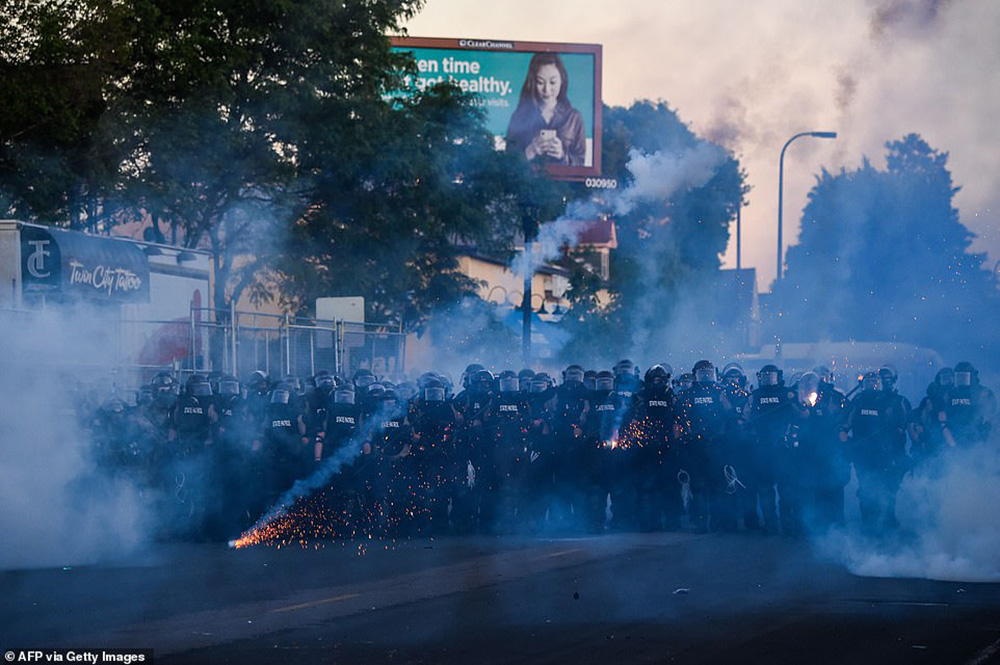 But there are always glimmers. This is a word from fellow intern Alex: the opposite of a trigger, a glimmer is a little shock of joy and comfort that jumps out when you least expect it. Like a trigger, which may bring up loud and unwelcome memories zapping into your mind, a glimmer is an open nerve of unsuspected hope. As we all know, of course, hope is only the beginning, and that’s where the work begins.

We’ve been starting to sail the Hjørdis and learning traditional ropework. Ben Byron, Program Manager here at North House and local knot expert, has been showing us how to turn a single unprotected rope into a chafe-proof, sun-proof, water-proof tool to last through the ages. First, a smaller rope is wormed in between the twines of the larger rope. Make sure to pack it in tight - you want to get rid of any open spaces where water could flow in! Then, canvas strips are wrapped around the rope in tight overlaps - this is parceling and provides a good deal of protection and compression. The final step is serving, where a small cord is wrapped with maximum tension around your wormed and parceled rope. After all this, sometimes the whole deal is dipped in tar. The final result is heavy but near invincible in even the roughest seas. 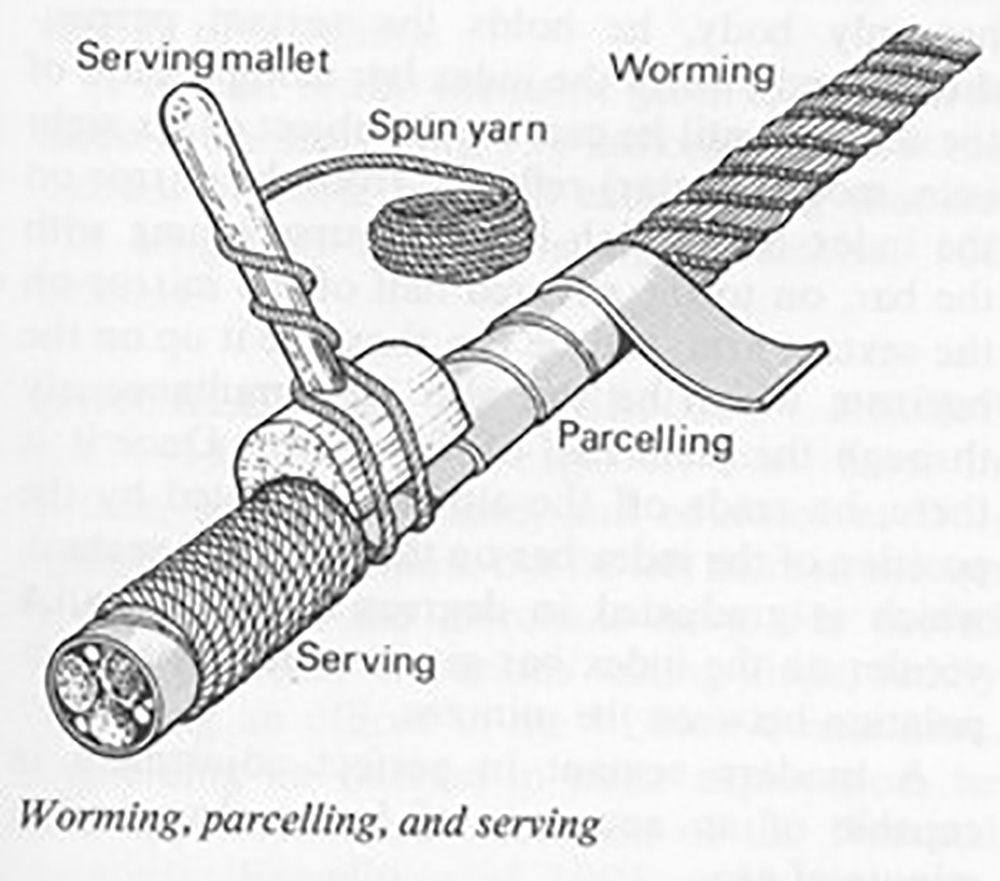 To me, a glimmer needs the same treatment. Just like a single rope, a single glimmer doesn’t last long on its own. A glimmer is only the bones of true action, no matter how inspiring. Here at North House I have been building my abilities to carry a momentary glimmer through into a finished project, a crafted gift, or simply an open smile to share with the community here in town. Though it seems chaos reigns in these strange times, glimmers abound.

To the ancient Scandinavians, the ancestors of North House and much of our community, swirling chaos was not the end of a story but the very beginning. Before the world, before the gods, before time itself, there was only the dark, swirling, foggy chaos, raging and cold. On the edge of the void was a rim of icy frost, which dripped and froze and dripped and froze along with the spinning of the chaotic storm. For eons and infinities it spun, and the frost grew by drips and drops and from flecks of cold, raging wind. This void was known as Ginnungagap, and on its edges was born a single, freezing-cold ox named Audhumla. She survived by licking the frost from the edge of Ginnungagap and stepping carefully around the stormy swirling below. She was the first being on the earth, born of absolute confusion and darkness, and she was kind.

One day, while licking at the frost, her tongue found a single, glimmering hair frozen in the ice. As she continued licking and drinking the thawing frost, more hairs emerged. Then a section of scalp could be seen, then an entire bearded head, and then the whole body of an enormous giant thawed from the ice and stood up. His name was Ymir, the first of the giants, the first of the gods, and, we can only imagine, very grateful to Audhumla. 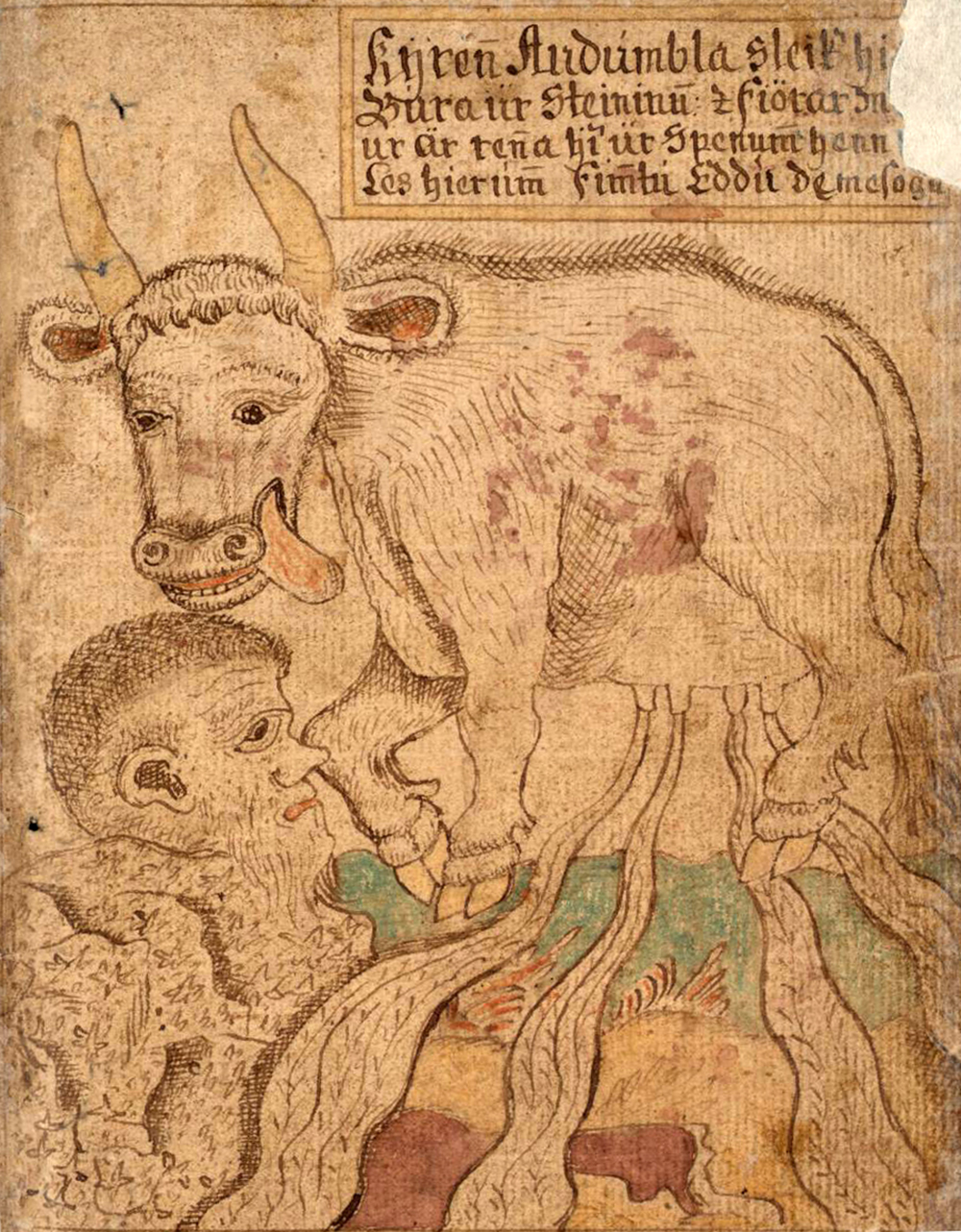 He was nourished by her milk just as she was nourished by the cold water of Ginnungagap. They spent ages, maybe eons together, exploring the small ring of frost around the void. Later, Ymir will travel across the fresh face of the earth and create the mountains, the rivers, the stones, and the soil. Later, in our earthly time, Scandinavian settlers will bring this story of a giant and his frozen ox to the New World, and see his marks all over a landscape that is clear, and bright, and new.