Slub. An extra fluff, an accidental blob on a yarn being spun. It happens often if you’re not paying attention or if you’ve got the hiccups or you’re just learning and not so comfortable with using your previously-human fingers as spiderleg web-extruders. 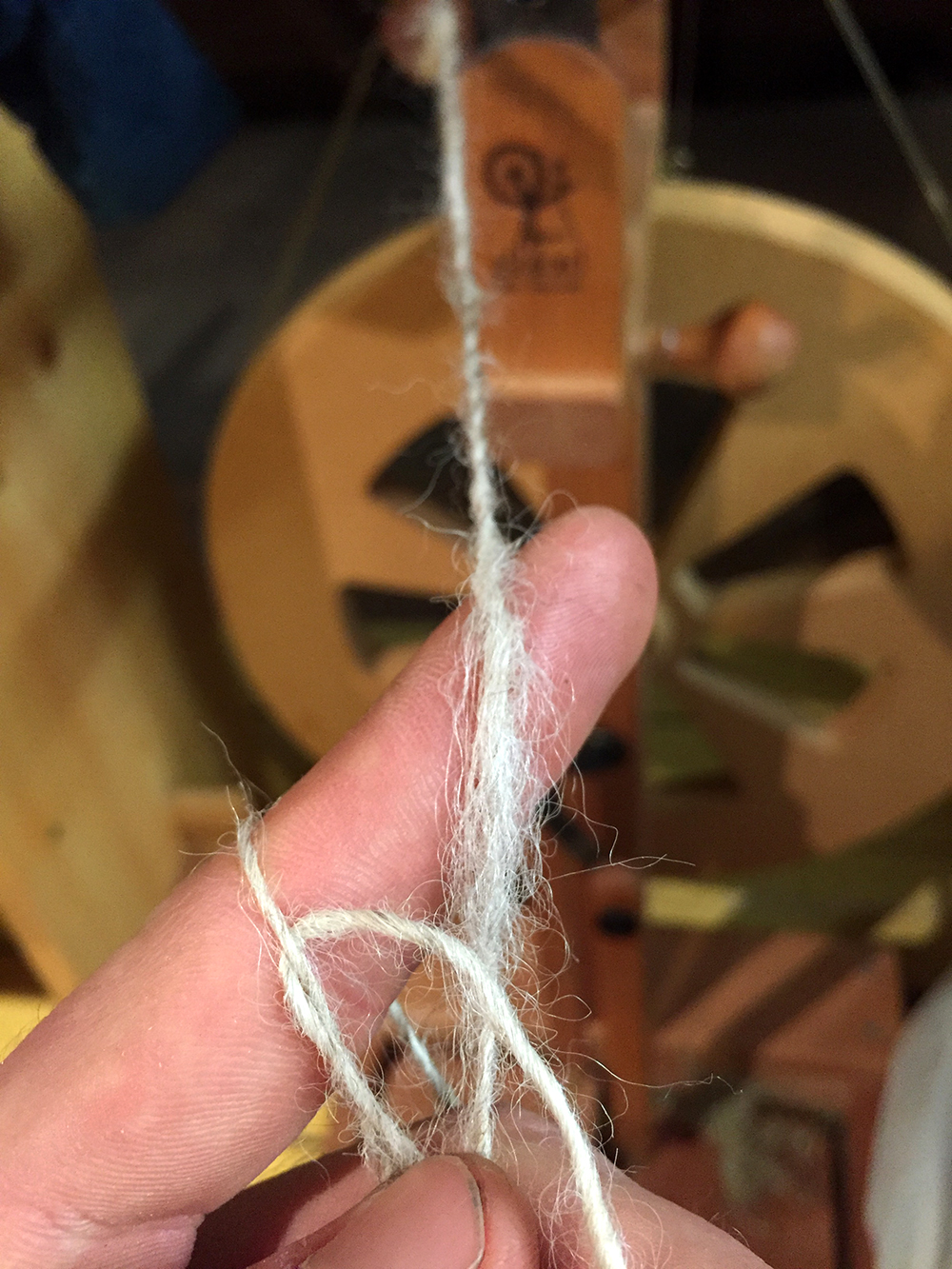 My very own slubby yarn, being guided by the North Carolinian hand of Martha Owens, here at North House for Fiber Week classes and festivities.

As far as I can tell, the term comes from a Reading Rainbow episode where our hero learns about the ancient art of spinning wool.

“Aye, that were called a slub,” says the maybe-faking-an-Irish-accent spinstress, “and you should be proud of it, for quite a few people pay quite a bit more for such wool that looks handspun.”

Another one for you: the maidens. The maidens hold up the bobbin, which is whizzing around in step with the spinning wheel, pulling in yarn and building up the twist that turns fresh, unruly fibers into seriously strong strands. Even three single hairs of wool can be spun together into a yarn, which would then be ranked cobweb weight. Smaller than lace, even. If you’re spinning this small, you'll need bifocals to see the yarn. 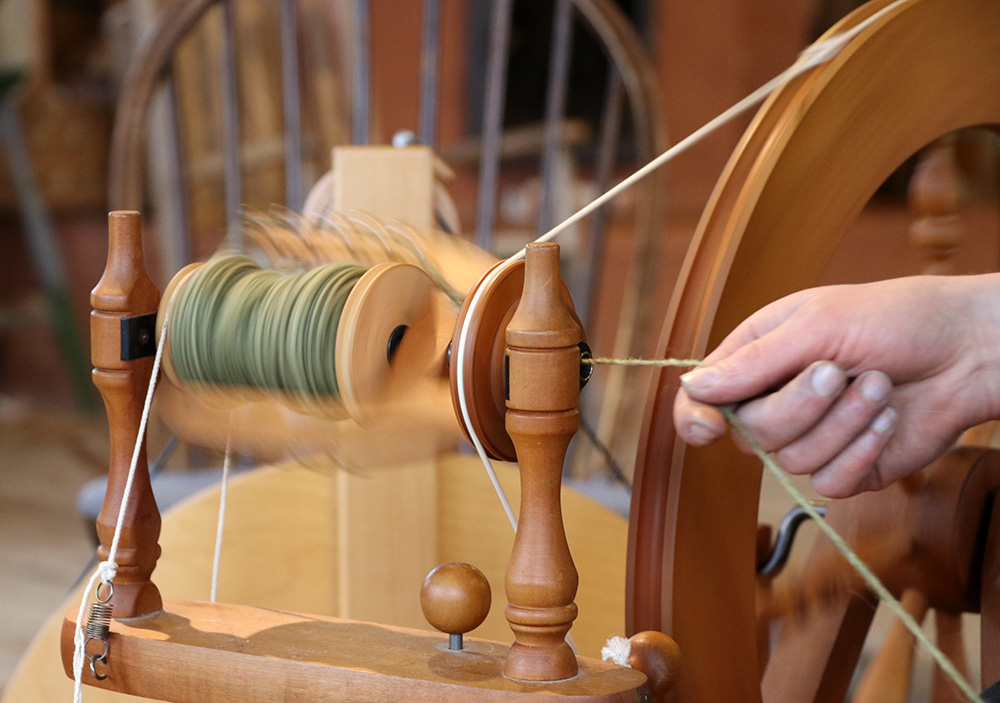 The maidens and the bobbin together make up the contraption known as the mother-of-all. The whizzing, spinning mother of every textured textile that has ever been sewed, stitched, knitted, or nålbound. She is attached by a rope or thick yarn to the spinning wheel itself, which is powered by a treadle. The ratio of size between the bobbin and the spinning wheel means the bobbin is moving really fast - if you’re not ready for it, the yarn will get sucked right in like a wet noodle. When your yarn gets noodled like this and you flinch - and you will flinch - that’s when slub shows up. Keep practicing. 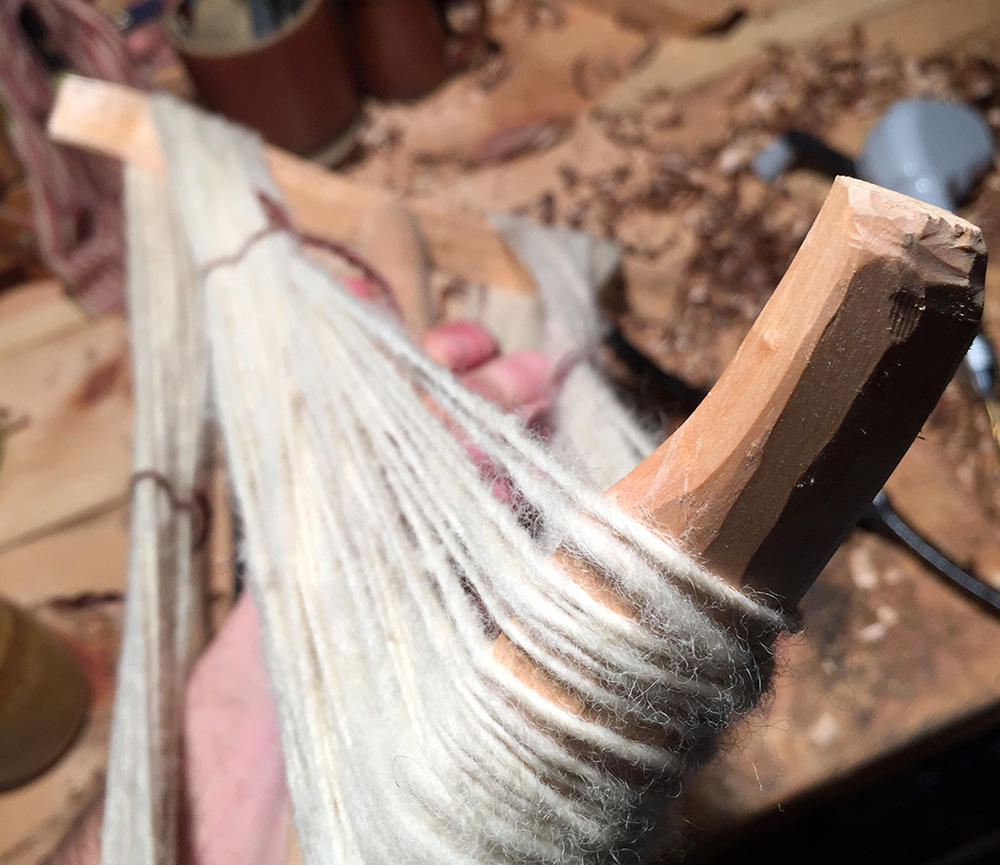 Us interns get plenty of time to make mistakes, which seem to be the only currency accepted by whatever craft gods are responsible for handing out wisdom and skill.

On the woodworking side of things, I’m afraid that I’m only catching up to common words like wracking, which is the loose shiftiness of an amateur table. Not to be confused with wobbling, which is when one leg is only a folded napkin’s width too short, and every time you put your elbow down the whole thing goes wobble-wobble and spills your coffee everywhere. No - wracking is that sideways slide that makes you think a couple screws are missing. In our case, it was because the mortise and tenon keys were shaped wrong and didn’t make a snug fit… but those are words I can’t yet use with confidence, because I can never remember which is which. For now, I was just pleased to learn the difference between an uneven-leg-wobbling and a loose-screw-wracking. 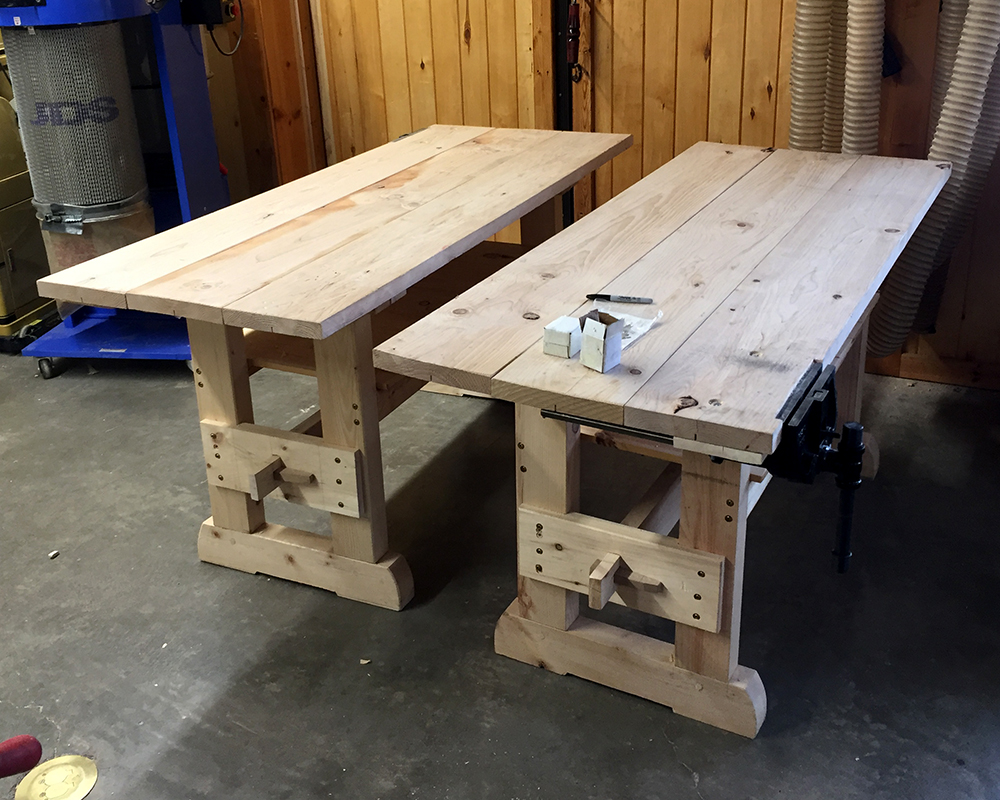 Randy Schnobrich and the four interns make a table that will spend a long life being hammered, drilled, chiseled, and otherwise loved.

The third adventure we’ve been on is learning to weave. My favorite term from that so-far-successful craft has been bout: the knotted ends of the long, long warp threads that keep everything organized. Bout, you know, like a wrestling match, except these knotted bouts are to keep you from kicking the loom to the curb when your 680 separated and carefully counted warp strands get tangled and hopelessly out of order. Like looking for a blue thread in a haystack made of blue threads. Keep your bouts tight. 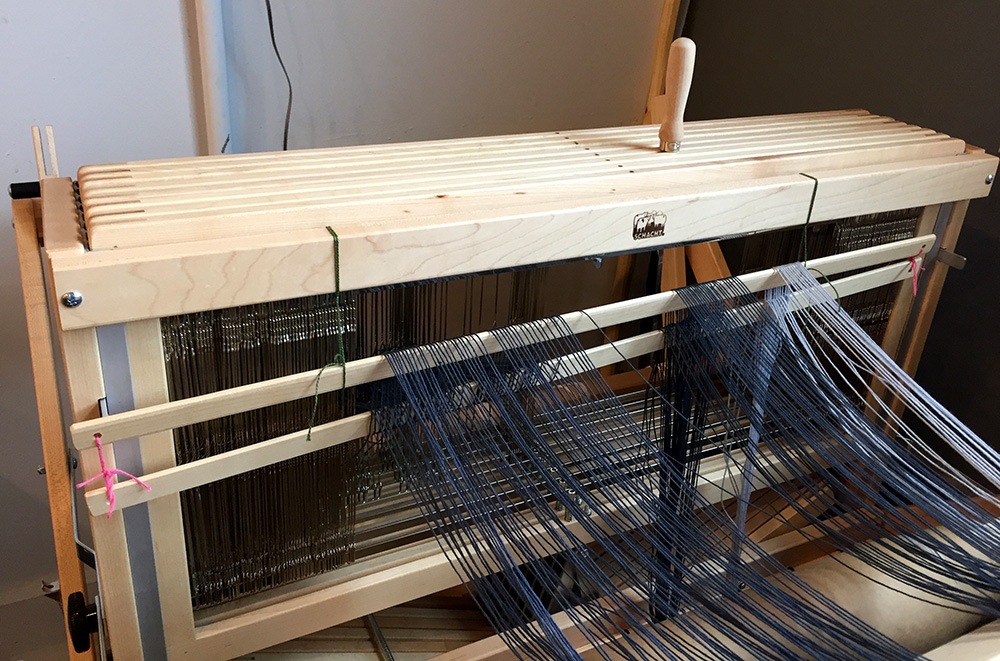 Christine Novotny, an Artisan in Development just starting her 2-year term here at North House, is patiently and skillfully leading team intern in winding our way towards a winning weft.

The prominent and stately fortress at the center of the loom is rightly called the castle. The castle protects the intricate and carefully-planned patterns that will unfold as a textile is woven. I imagine it is populated with the cheerful tiny folk that the ancient craftsperson would enlist to finish projects in the wee hours of the night.

In Scandinavian myth, the three Norns were said to spin, measure, cut, knit, sew, and weave the yarn of a soul’s life. Between them, they shared a single eye and a single tooth. You may know them as the Fates, which is a plenty good word for their occupation. Spinning the yarn of a lifetime takes much concentration - one can imagine that, with only one eye jealously shared between the three, the spinner’s finger may occasionally slip. 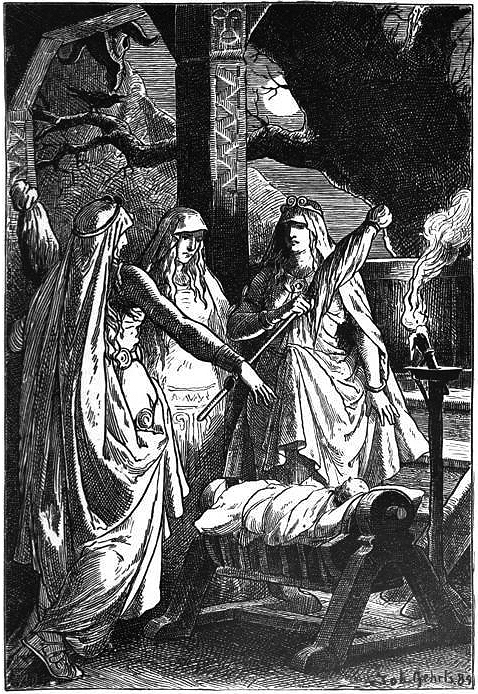 Slub is a chaotic point in your life-yarn, a fuzzy, confused mess, but does not often last for long. Some weavers, I’m told, prefer textured yarn with plenty of slub to add character to tapestry. If you find a slub in your life, or you see a friend working through their own, be patient. It is only the blink of a norn, or the wrack of her spinning wheel. 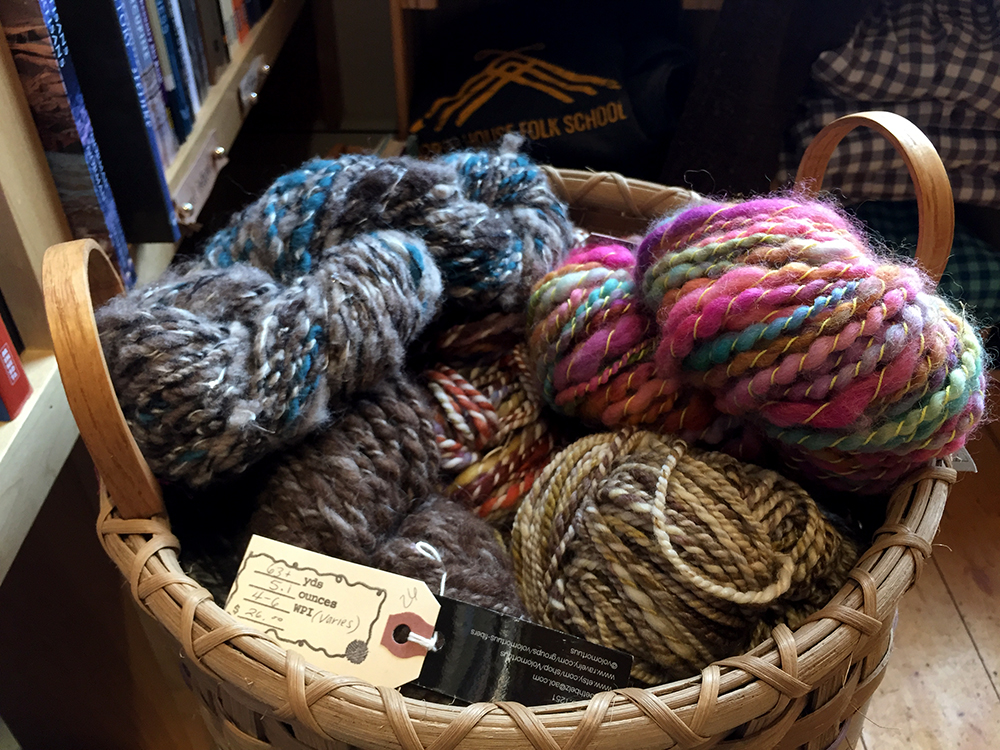 And you should be proud of it, for quite a few people pay quite a bit more for such wool that looks handspun.