For more than a dozen years, I’ve been told by friends that I must find a way to John C. Campbell Folk School in North Carolina. They told me that I would fall in love and not want to leave.  \

folkelighed - community life that embraces everyone

Nikolai Frederik Severin Grundtvig (1783-1872) - A Danish educator and philosopher known for the development of the Folk School. 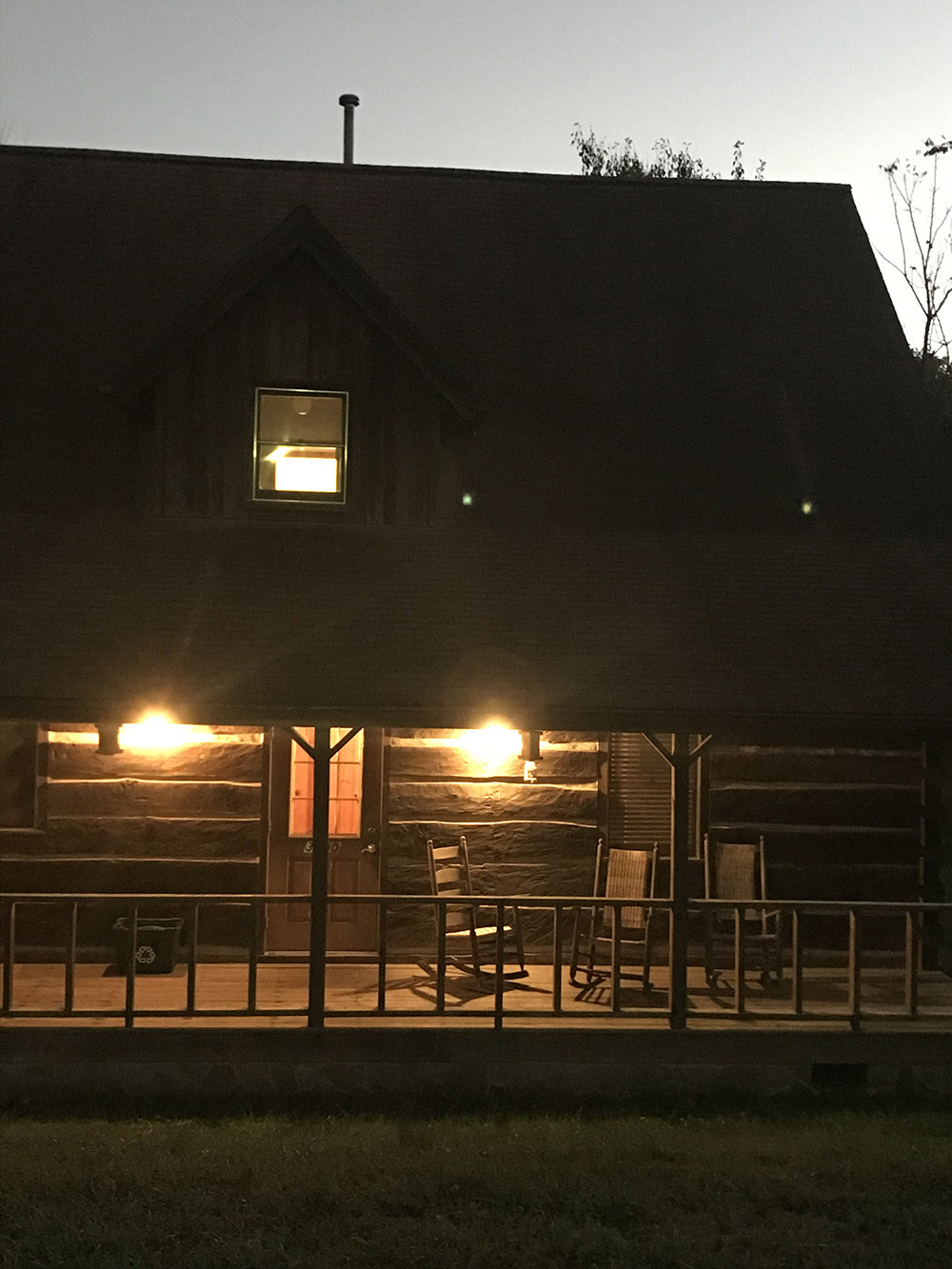 For more than a dozen years, I’ve been told by friends that I must find a way to John C. Campbell Folk School in North Carolina. They told me that I would fall in love and not want to leave.   Finally, this November, I found myself on a journey to the folk school and to no surprise, I was completely infatuated and I am already scheming my next visit to the school. Luckily, and what an honor, I was invited to teach felting at the folk school and had an all expenses paid, working vacation in the Appalachian Mountains.  Each day of my 6 days there was filled with great people, great food, lush mountain views, music, dancing and a 5 day long felting class with 5 wonderful women. 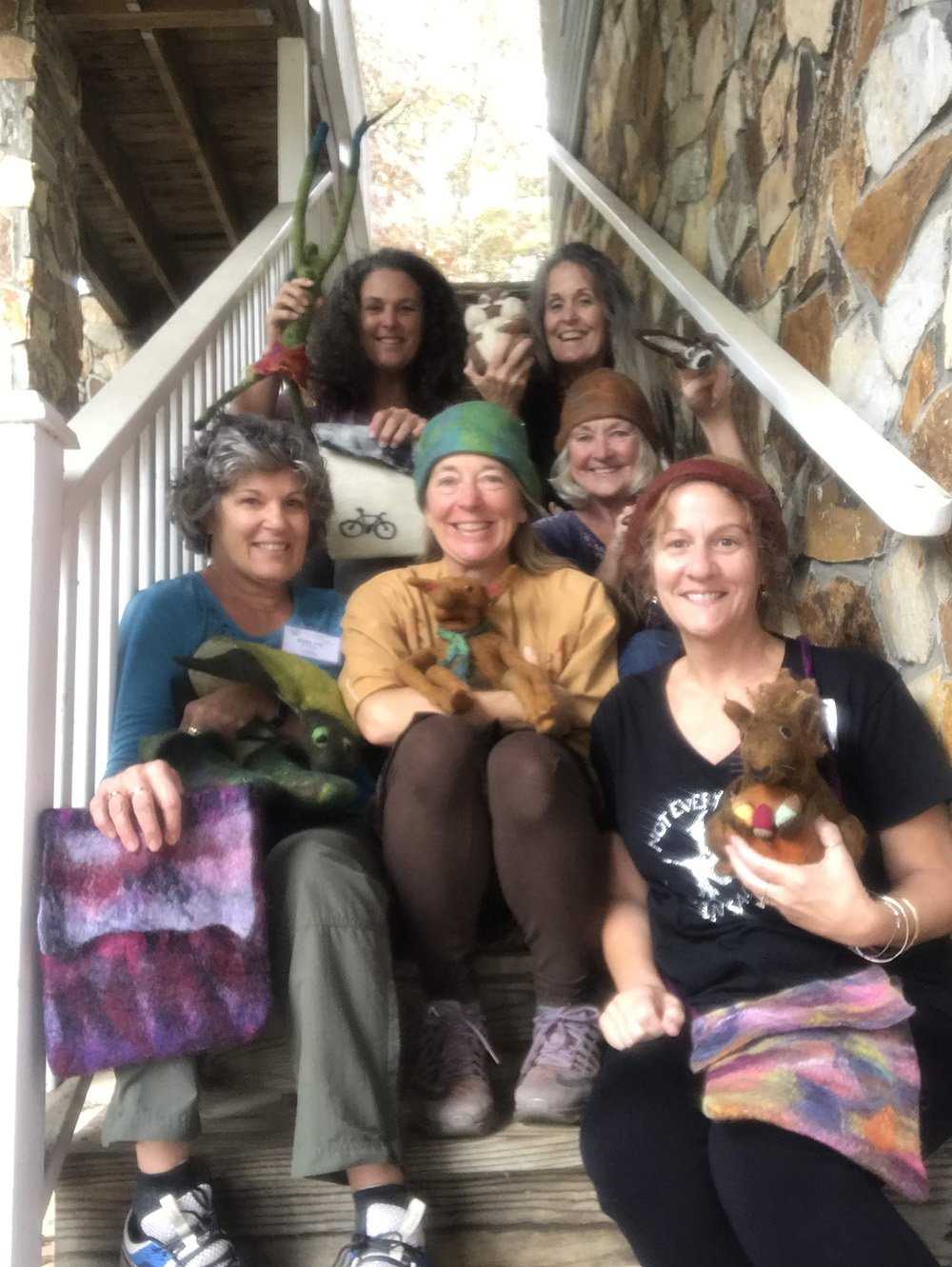 Students sitting outside of the Fiber Studio

The class I taught was a 5 day felting sampler, an introductory felting class, including 3 different felting techniques in 5 days.  Nearly everyone had some experience felting but was interested in learning more about sculptural felting, seamless resist wet felting and/or nuno felting.

As part of my demonstration for sculptural felting, a troll character was born.  It was not even a thought in my mind, but as I manipulated wool; legs, arms, ears, a big nose and an even bigger belly appeared. 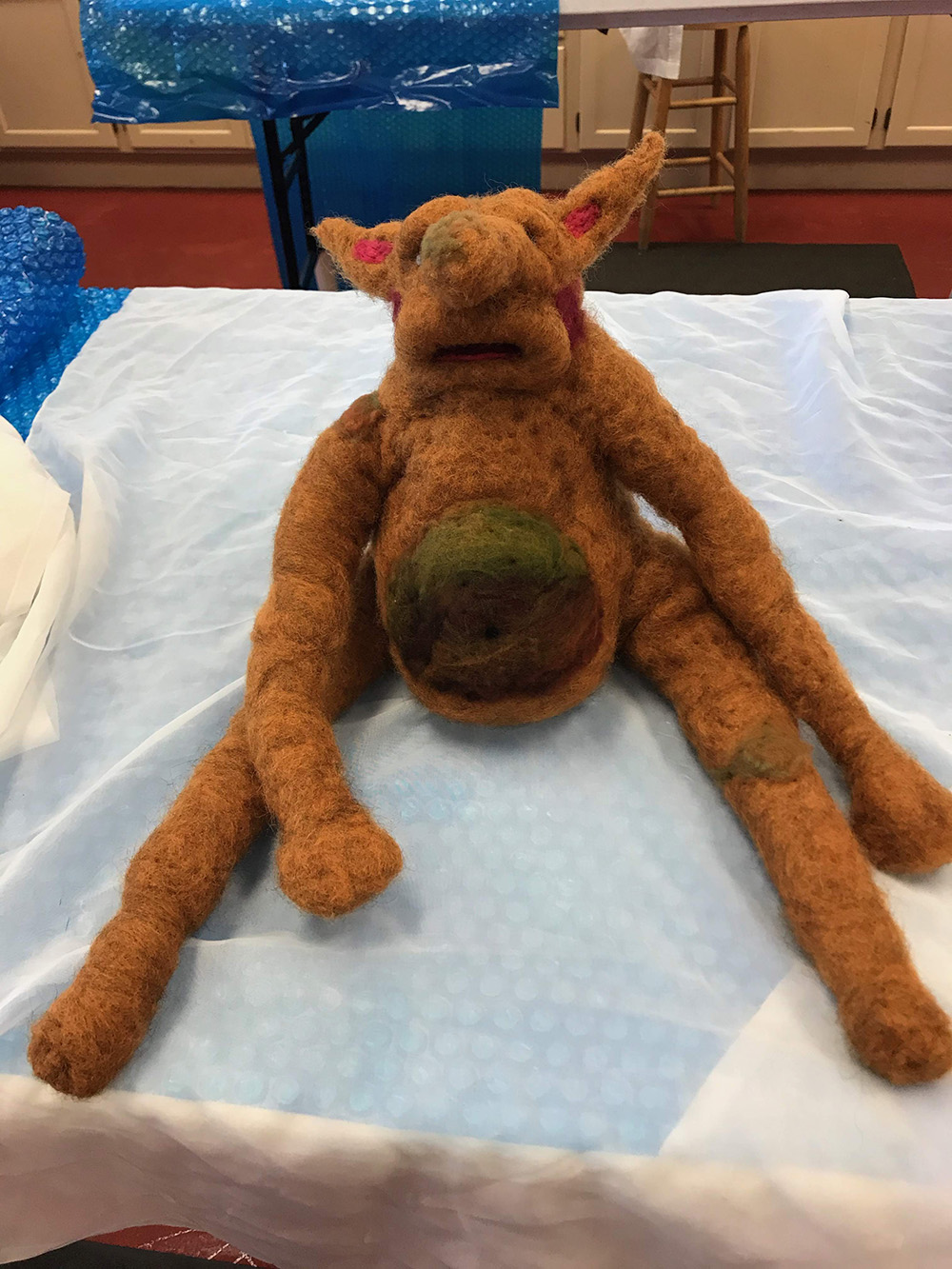 needle felted troll, not wet yet. 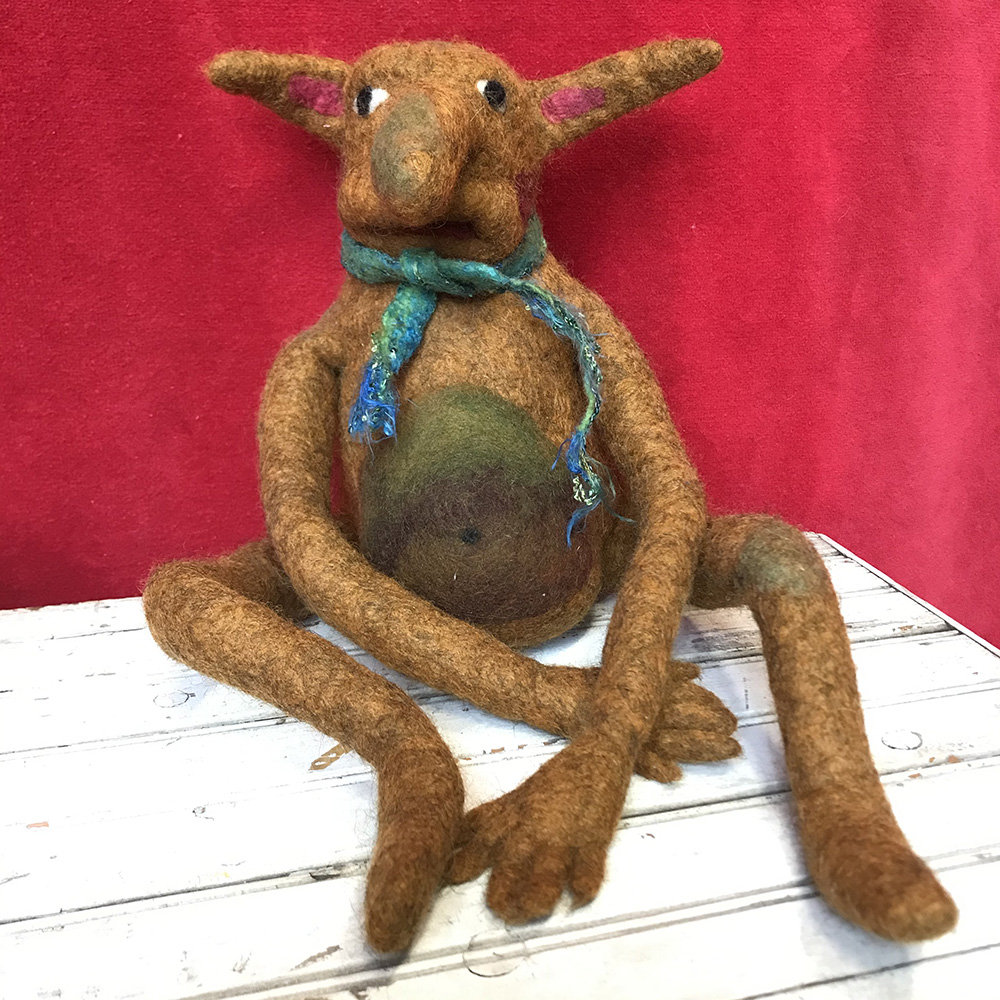 Finished wet felted troll, a new, yet to be named friend.

Luckily someone else sculpted a seducing wooly siren.  We don’t know what they were doing in the dark of night, but I certainly hope they were “friendly” and that there will be "litter" of wooly munchkins in the future! 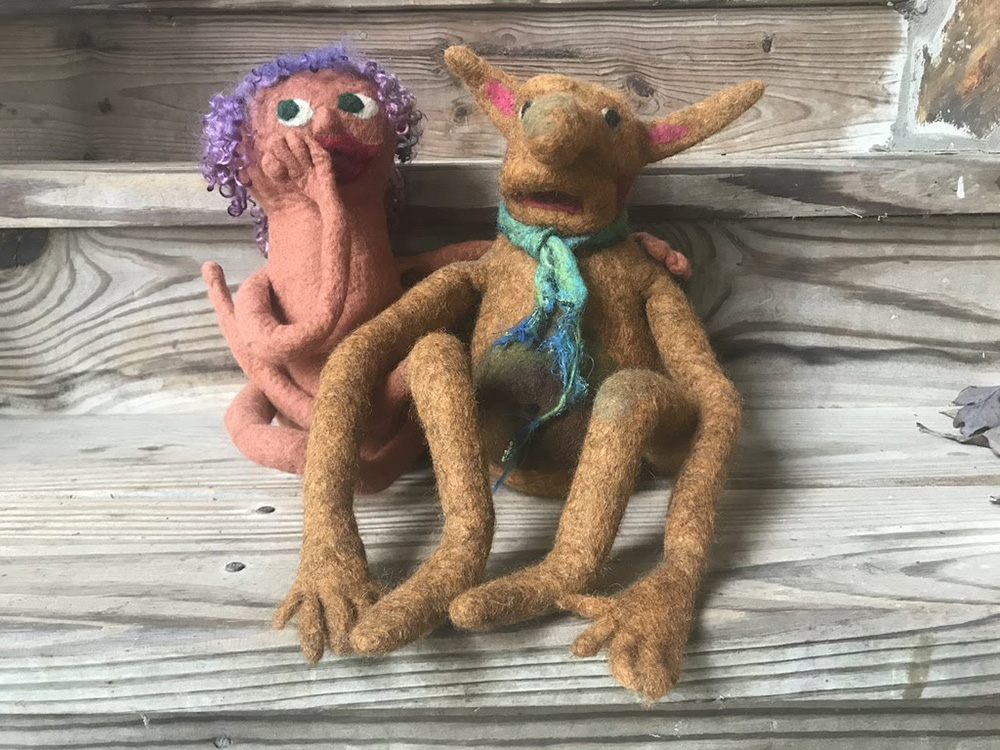 The John C Campbell week culminates in a group show and tell, where all of the students share their work from the week.  While I was there, there were about 12 classes, from blacksmithing, carpentry, storytelling through illustrated crankies, painting, ukelele, photography, basketry, quilting etc. and there were about 115 students.  There is a sweet community feeling that is created during the week of sharing 3 meals a day in a family eating style and the many other activities that were offered before and after class hours. 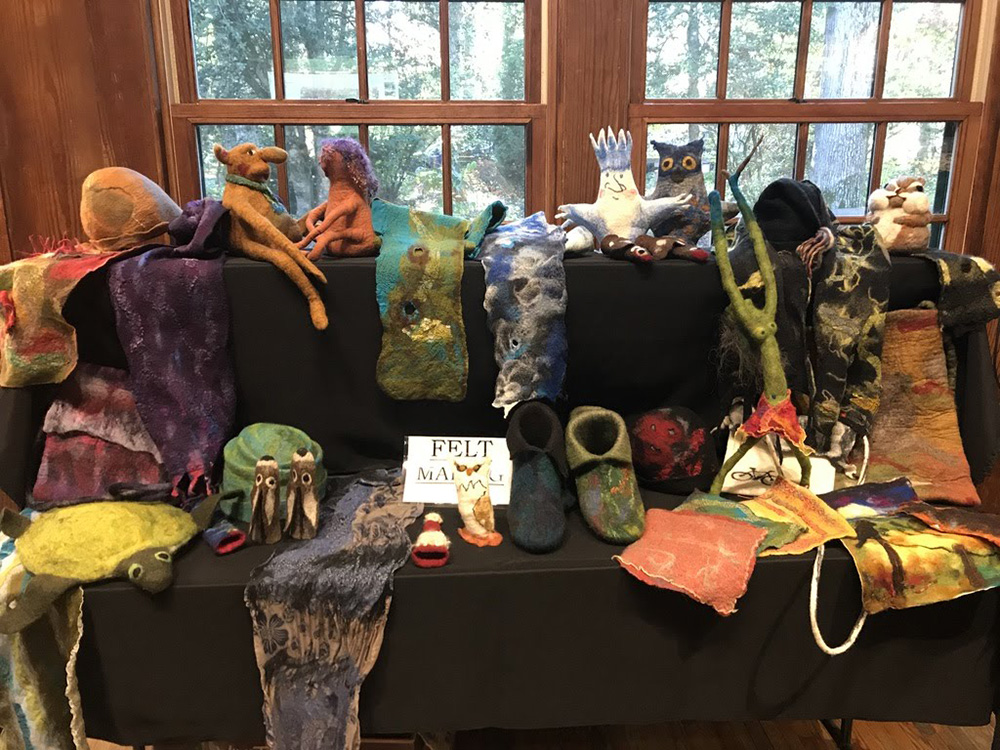 Display of the work for Felting Samplers class.

An added bonus for me was being surrounded by the music and dance of the mountains.   This was especially powerful for me because I was a part of a Minnesota version of an Appalachian clogging group in Minneapolis for about 9 years.  While in North Carolina, I felt a keen sense of being in the birth place of clogging, where old time music and stepping to the rhythms, created the social folk dance called square dancing and foot stomping dancing, called clogging. 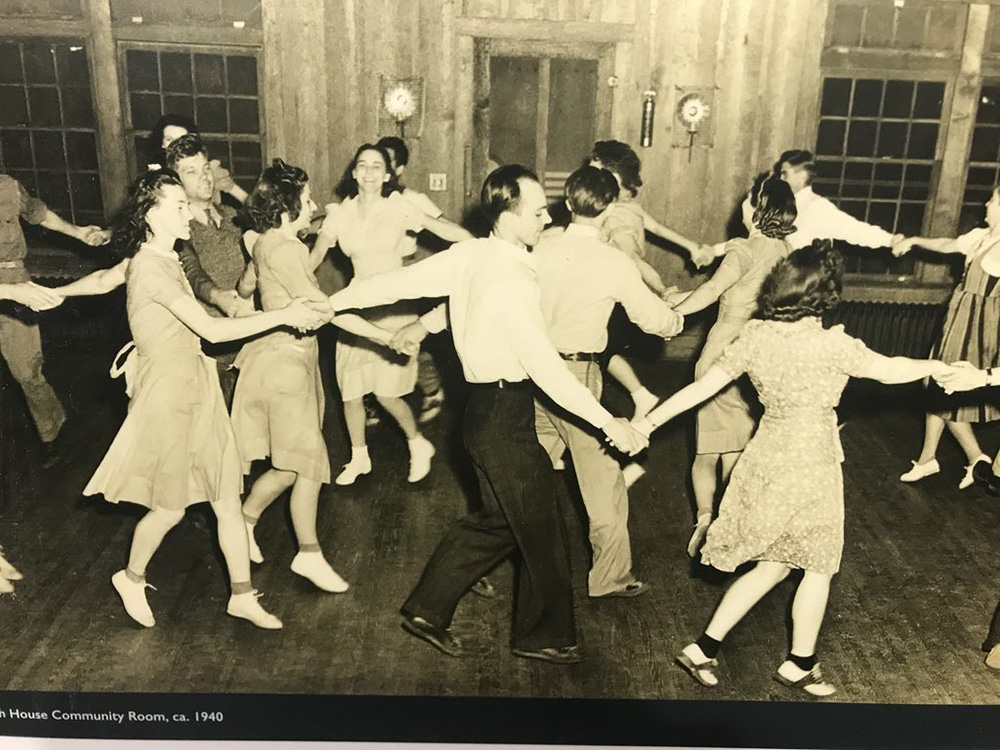 photo of dancers from the 20s 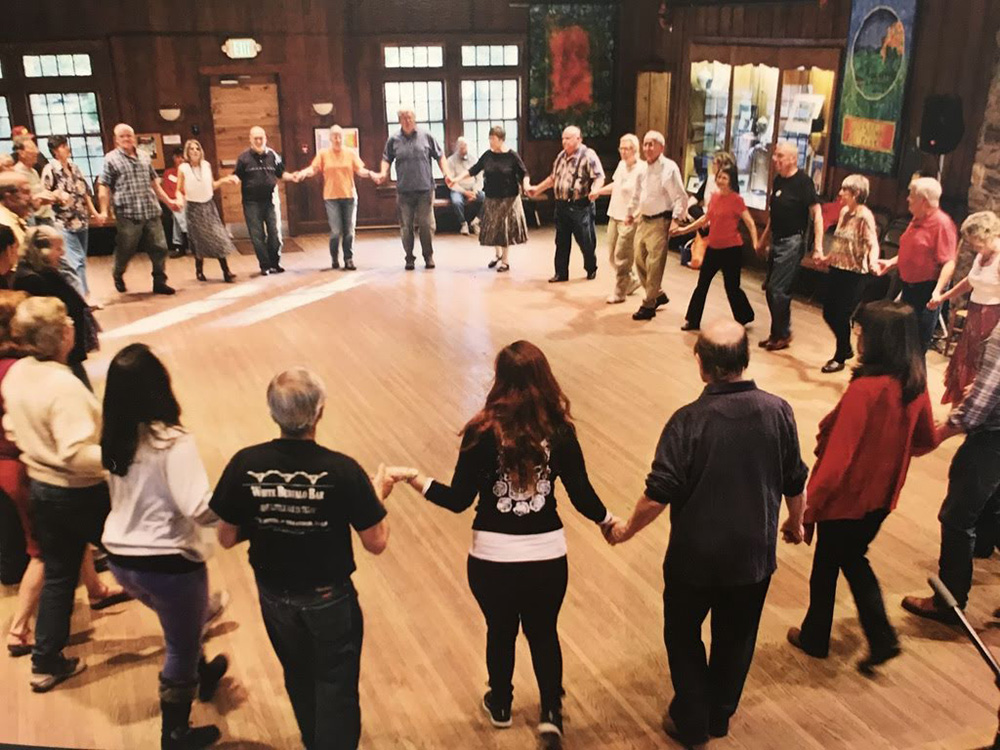 On Friday night, when all responsibilities of teaching and being a student were done, people meandered to the local gas station, call Clay’s Corner, which is now a community gathering place where Old Time Music jams happen.  I couldn’t resist clogging to the familiarity of the music, with a bit of pride that I come from Minnesota but I can “speak” a bit of the appalachian tongue through my feet. 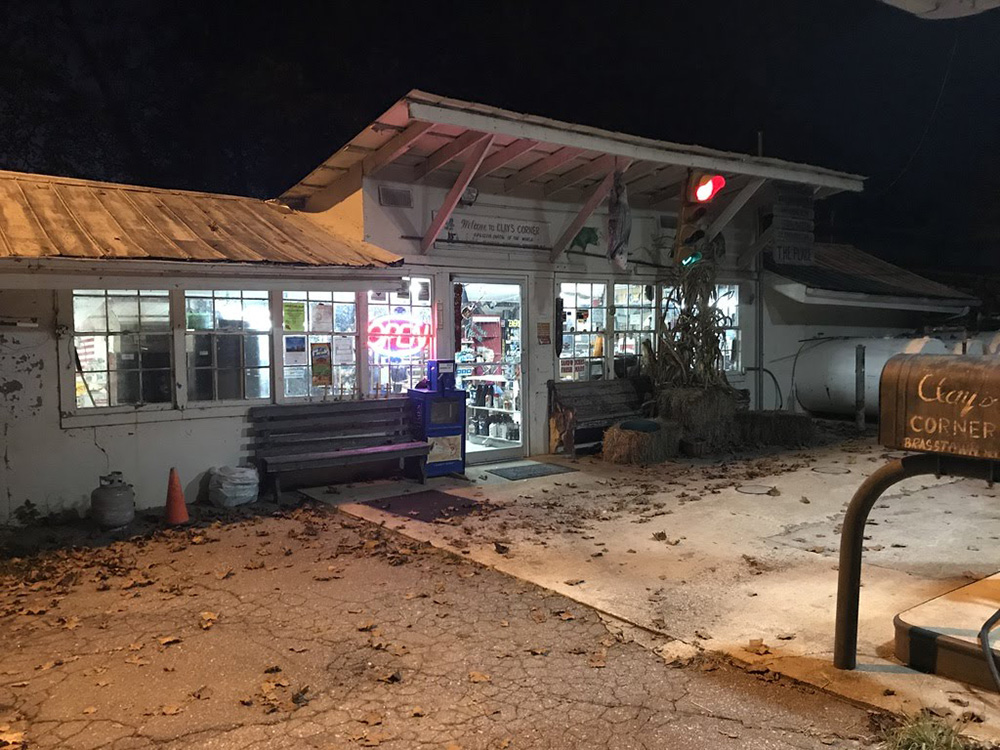 It’s interesting to think about the clogging style I learned while a part of The Wild Goose Chase Cloggers.  I assume we have developed a unique midwestern step or sound, based on the interpretation of folkies who went to Appalachian music festivals in 70’s and brought back what they learned.  Through time, the dance has evolved, like any craft form does, to include influences from the present, a little scandinavian swing, a taste of the jitterbug, a bit of hip hop. 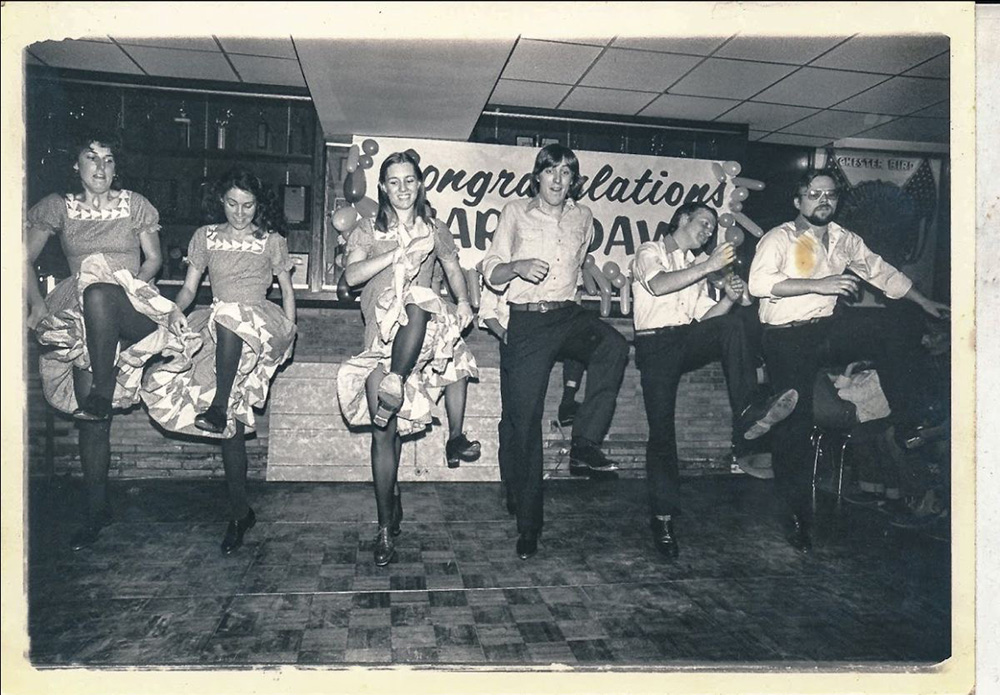 John C. Campbell Folk School is unique in that it is the first folk school in the United States and will be celebrating its 100th anniversary in 2025.  Similar to North House Folk School, there is a feeling of joy, creativity and a community spirit that encourages learning. It seems there is a common thread between these two schools, a Danish man named Nikolai Frederik Severin Grundtvig. Grundtvig, was likely radical in his time, 1783-1872, wanting to shake up the conservative educational system by providing a new

type of school focused on enlightenment of “common people”.

Here is a quote from the John C Campbell website:
The folkehojskole (folk school) had long been a force in the rural life of Denmark. These schools for life helped transform the Danish countryside into a vibrant, creative force. The Campbells talked of establishing such a school in the rural southern United States as an alternative to the higher-education facilities that drew young people away from the family farm.   They were hopeful that the quality of life could be improved by education, and in turn, wanted to preserve and share with the rest of the world the wonderful crafts, techniques and tools that mountain people used in every day life.
In 1925, the Folk School began its work. Instruction at the Folk School has always been noncompetitive; there are no credits and no grades. Today, the Folk School offers a unique combination of rich history, beautiful mountain surroundings, and an atmosphere of living and learning together.
John C Campbell’s mission is succinctly stated in the motto, “I Sing Behind the Plow”.  This goes back to the roots of the school; providing educational opportunities, work and new skills to a poor, rural, agricultural community. There is a joyfulness at the school and a powerful beauty that comes from it’s deep roots in the traditions of the local people and the land.  Many of the buildings there are over 100 years old, built by locals with the wood milled at the school so many years ago. I had a room in the original farm house and walked through the woods and farm fields alive with bird song and frog song to get to and from the main campus. 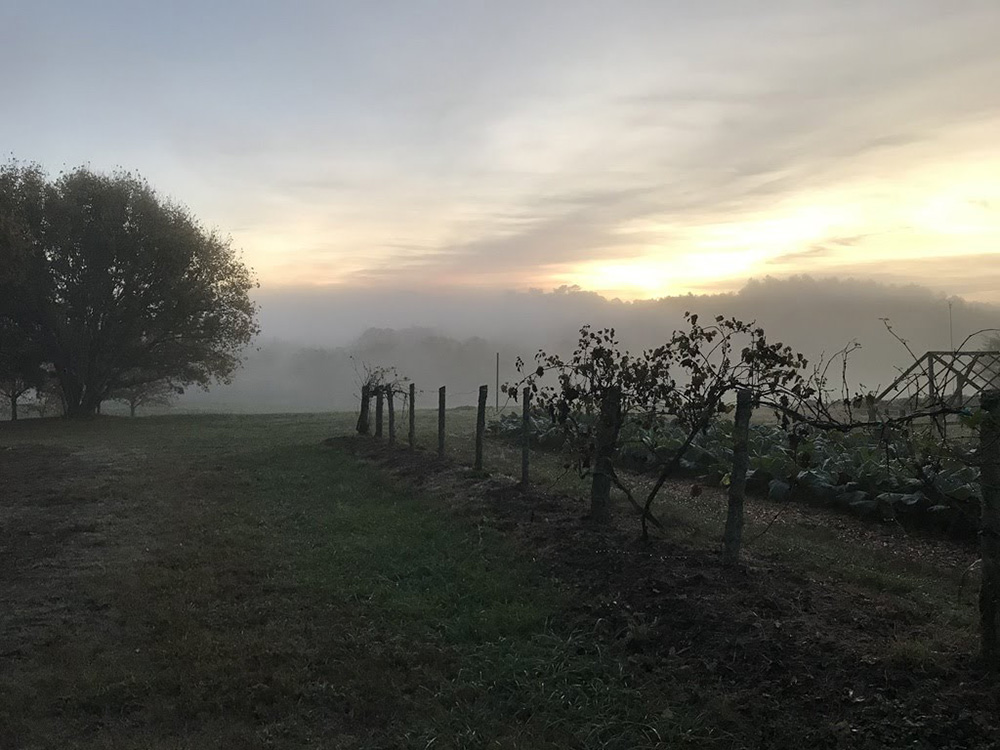 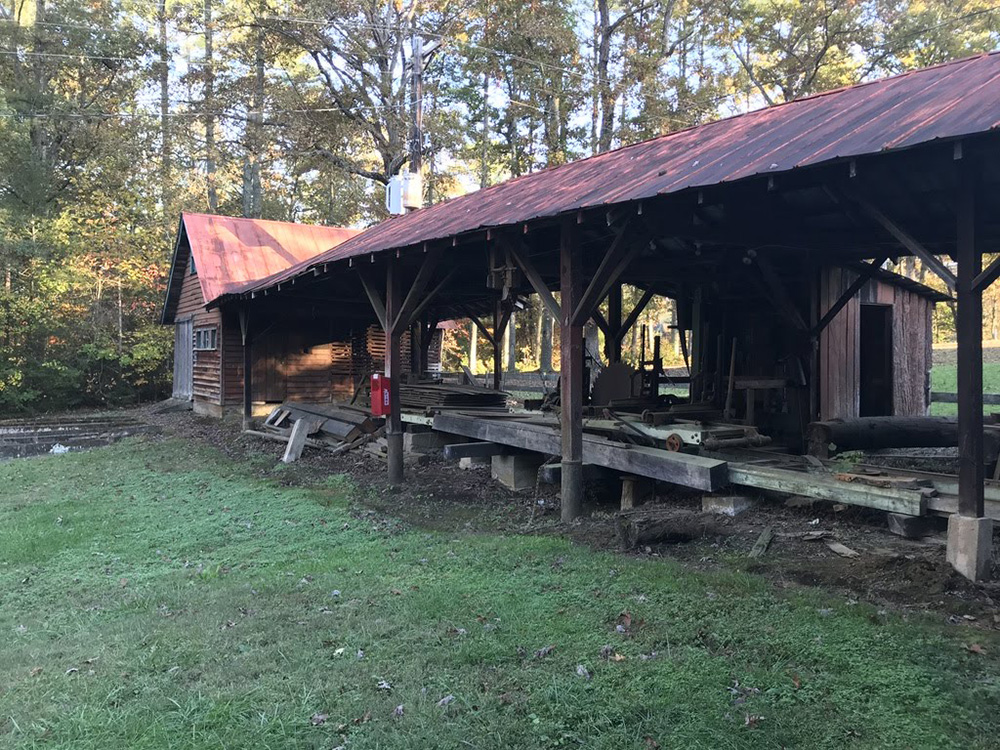 Times have changed, yet John C Campbell and North House Folk School, are thriving and continue to teach craft and build community.  To use our hands and to make things is so important, for different reasons from the past, but perhaps coming together to learn new “old” skills is even more important in today’s busy, technogically driven society.  I am so thankful to be a part of this tribe of people who celebrate the past, make time for making and take joy in creating things.

True to my intention to reevaluate my closet, I have made a few things from wool this month that I am using in my life.  This is a part of my effort to reduce my dependence upon synthetics made across the globe and to begin to use what I make, instead of just making things for others. 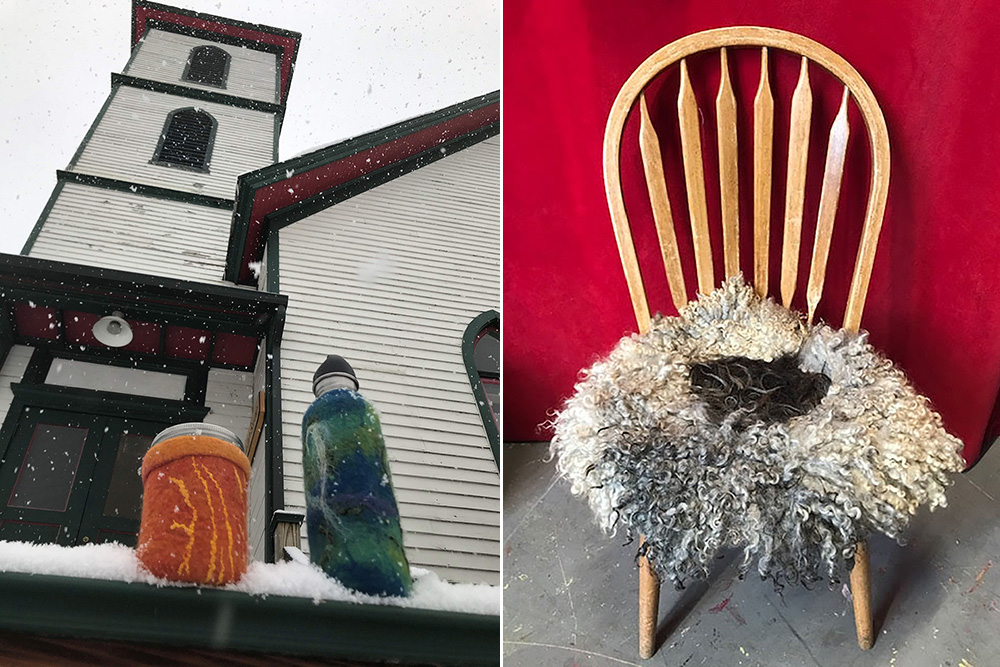 Water bottle and cup cozy in front of Betsy Bowen’s church where we have our studios, Wooly seat cozy made in a class with Linda Johnson Morke at Shepherds Harvest 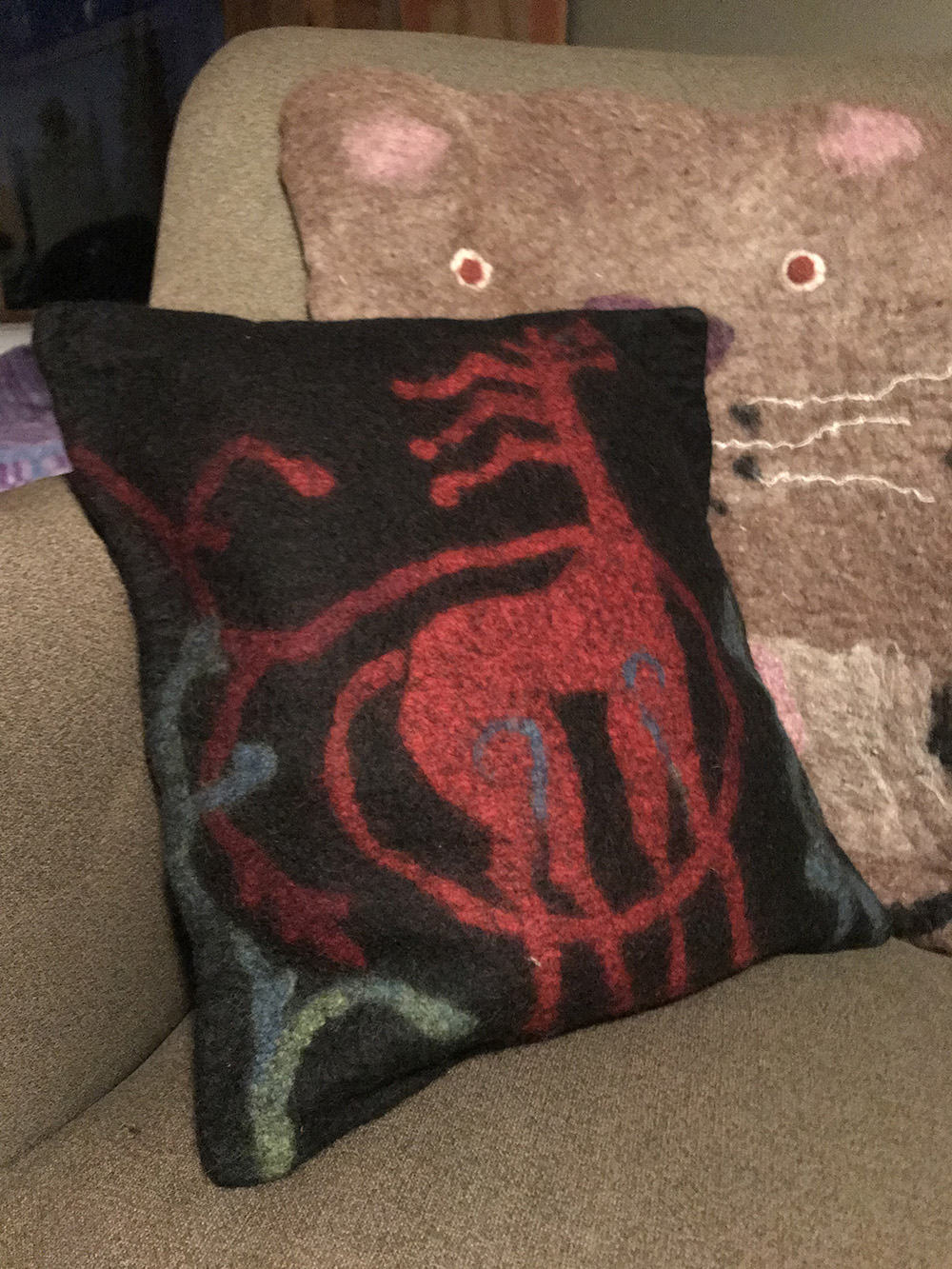 A Viking rune inspired pillow case made in a class at the American Swedish Institute with Judy McDowell.

Alas, most of my felting efforts have been for others and the holiday gift giving season.  I am honored to be in the American Swedish Institute Julmarknad Holiday Sale for the first time.  I am frantically making things, with an endless list of things I wish I had time to make. I am most enjoying the creation of the creatures that were inspired by the hetroll from John C Campbell.  They are playful and entertaining to create and always a surprise when they are done. There is rarely a plan, just a pile of old sweaters and socks, scrappy wool, needle and thread and a bit of time to “birth” the beings.   Here are a few creatures that are in process. Just their base form is done. Next will be the addition of needle felting the exterior wool and details and then wet felting the whole thing so it becomes a solid, long lasting sculpture. 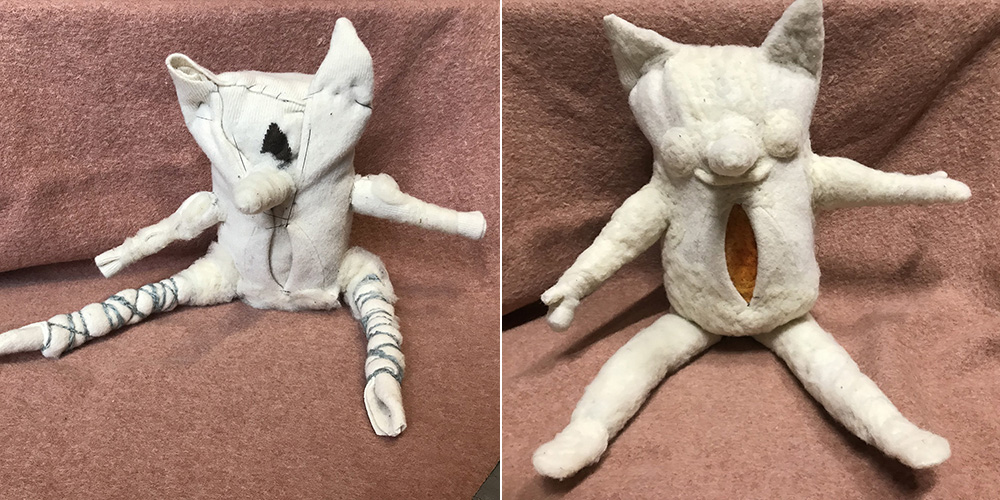 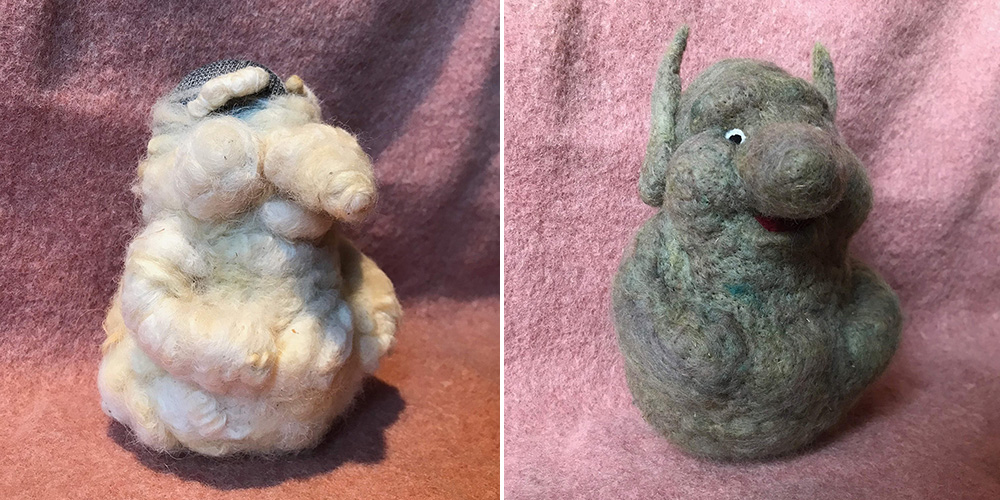 Creature community growing.  These are still in the needle felting stage and have yet to be detailed and wet felted. 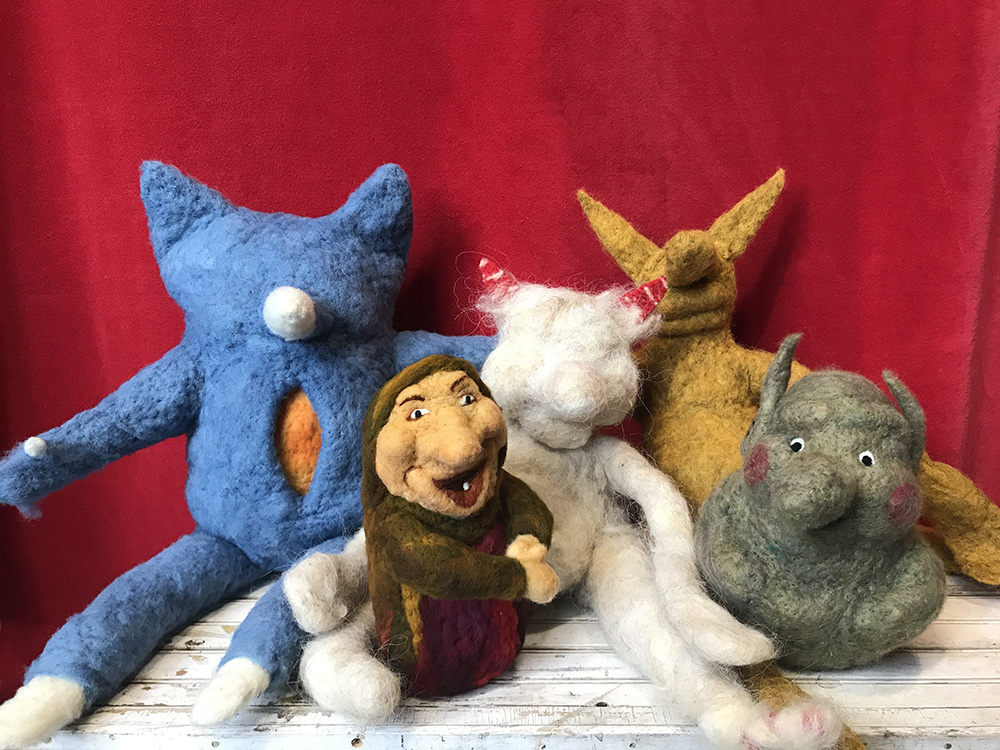 I’ll make sure you’ll meet them before they find a new home.