New Blog Post: Time, and Harvest Time: Emily Derke offers some insights on time and materials in her rope-making experiments.

Right now it’s harvest season. That means that it is the season to collect some specific materials that will be used for the entire year. Harvesting is a project of its own, and utilizing what is harvested can sometimes feel like a completely separate activity.

“How long did that take you?” … a common question I never know how to answer. Usually I respond with a numeric response, but that doesn’t give a very accurate description of what has taken place.

Let’s say I harvest all of the basswood bark I want to use this year in a single afternoon.  But first I had to find the spot to do so. Sometimes that can be easy, or it can be unendingly complicated. There is some part of the material processing that can happen immediately. The outer bark layer can be split from the inner bark at the time of harvest for easier storage and transport. It can then be rolled up, dried and stored until needed. 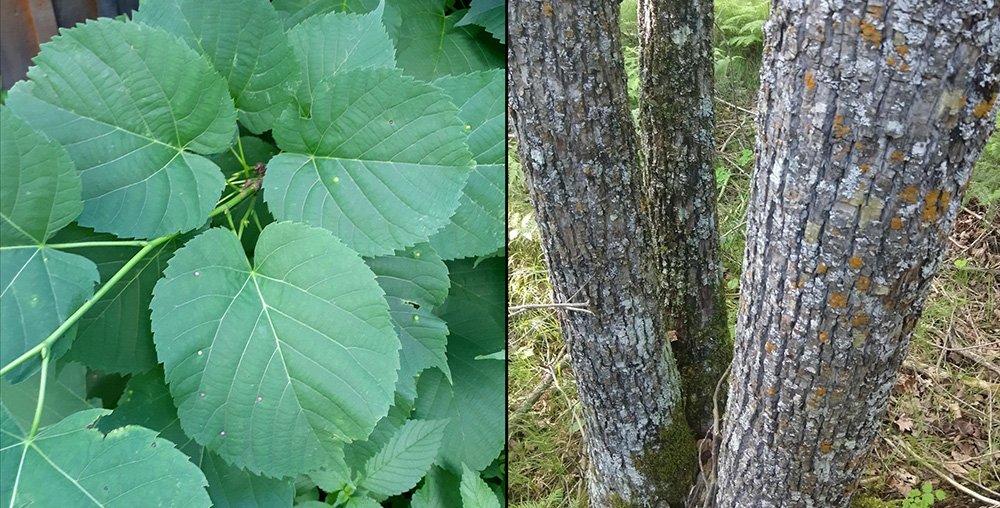 Basswood bark is well known for it’s fiber. It is the same as the Linden or Lime trees, as they are called across the big sea. The bark is stringy, fibrous and strong and can be used as is as quick everyday twine,or for specific types of baskets. It can also be processed further for a soft fiber with a wide range of uses. “Bast” fiber is the word for the fiber from the inner bark layer of any plant..

Recently, I’ve been boiling basswood bark in wood ash. There are a lot of different ways to process basswood bark for use, and it all depends on what you want to do with it. Several years ago, a friend gave me a small coil of basswood bark that had not been processed. He told me to boil up some wood ash in water- pancake batter consistency- and simmer the bark for a few hours until it starts to pull apart. So I tried it and it worked!

Alternatively, it can be submerged in water for a few weeks to produce soft fibers- a process called “retting” which produces a light colored, softer fiber.

Ok so now that the bark is harvested, the outer bark has been removed and it is stored and ready for whatever is next, I mix up a good batch of wood ash and water and get things boiling! After many hours, the bark starts to pull apart nicely. So I then take it out and rinse it. It is slippery from the alkalinity produced in the wood ash solution, and full of wood ash. Rinsing with a hose does an okay job, but it is really nice to sink it in a flowing creek for a few hours to really get it rinsed clean. 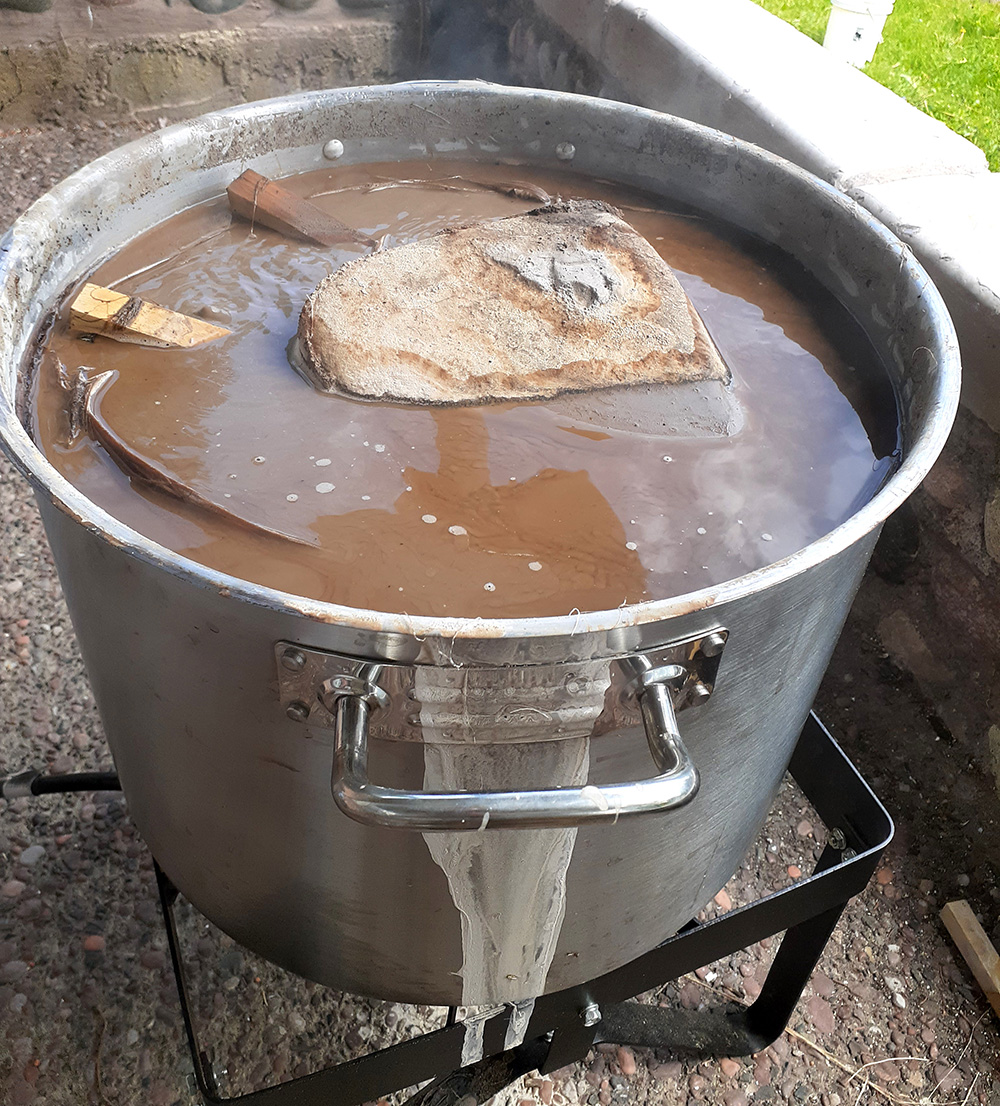 Bark simmering in wood ash. Weighted down with a rock.

Next, the fibers are pulled apart into thinner layers, and then further separated into narrower strips for use. 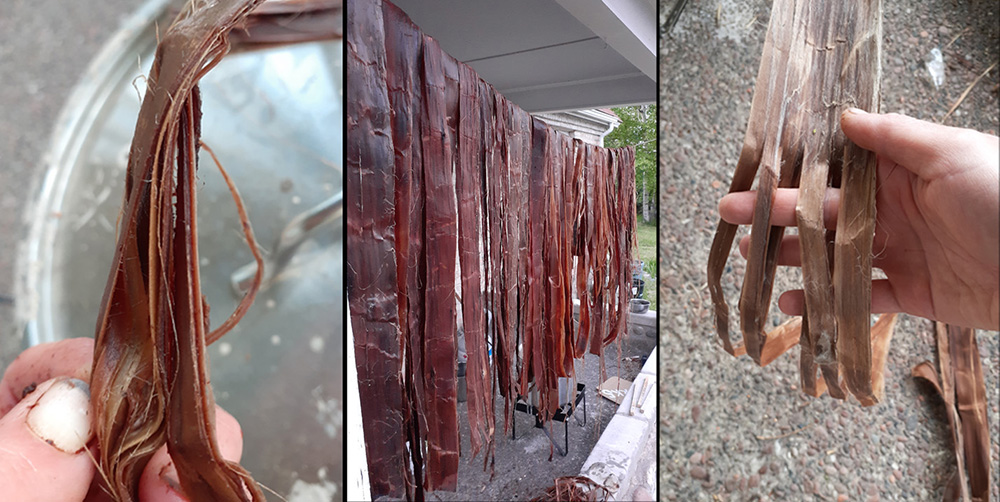 What does one do with this fiber next? All kinds of things! It’s always good to just have some on hand. It can be twisted into a neat little cord to add a nice touch to the rim of a basket. Having a variety of materials available to use is generally a good idea. 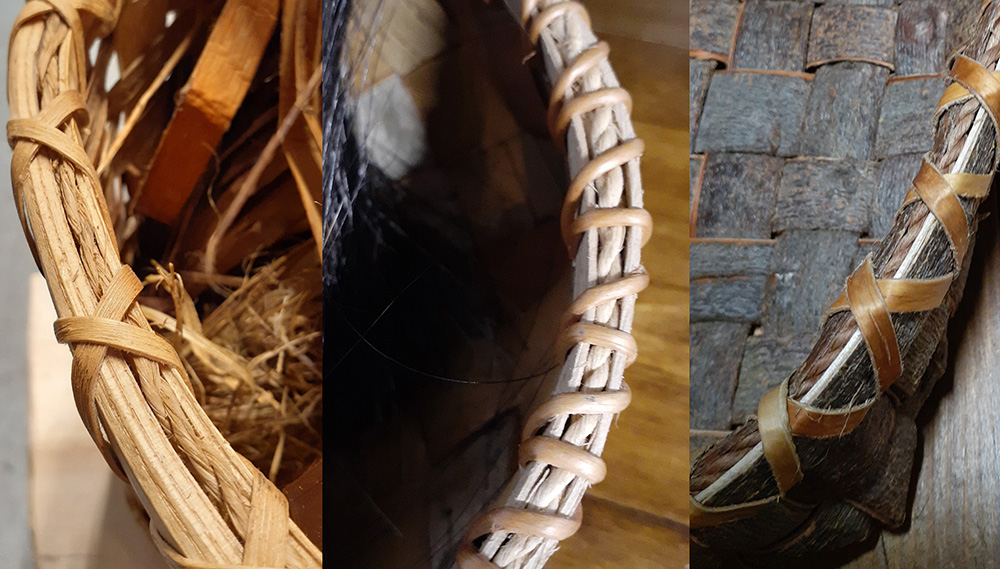 My interest in using this bark prepared in this way is for ropemaking. There are a number of suitable materials for ropemaking. Basswood bark has been widely used and seems to be the easiest for me to access and prepare in quantity.

There isn’t all that much information out there on ropemaking. That’s probably because it is really pretty straight forward and just takes time to do.  Of course there are many finer points to be learned through experience, and different details for different applications, but for getting started, it’s all about action. There are many methods, from the simplest form of twisting bunches of fiber by hand, to methods using varying levels of mechanical assistance.

I’m lucky to have a group of friends to learn with. These are some of our first test pieces. 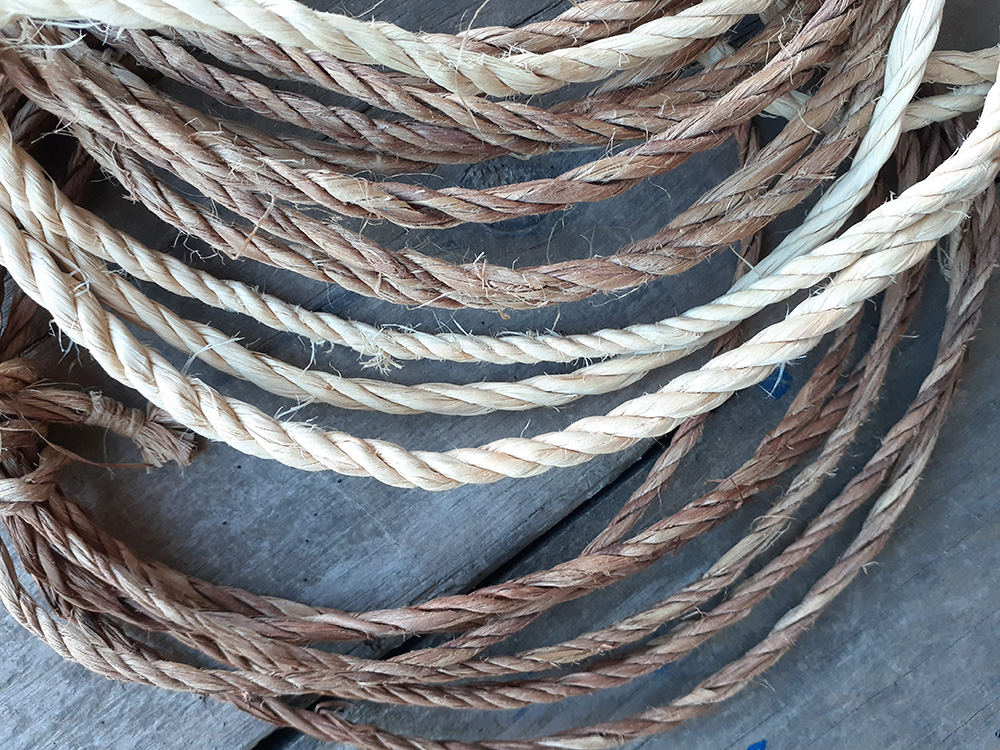 To go from prepared fiber to rope can be pretty quick or pretty slow, depending on how you do it, but first there must be trials, ideas and experiments.

So how long does it take? I’m not really sure.

It’s important to address the whole process in the answer to the question, but often time our brains work in such a way that it’s hard to comprehend the all the little steps and pieces working over a longer period of time.

… and then there is the amount of time it took for the tree to grow that bark!  But that’s another story. And it’s a long one. 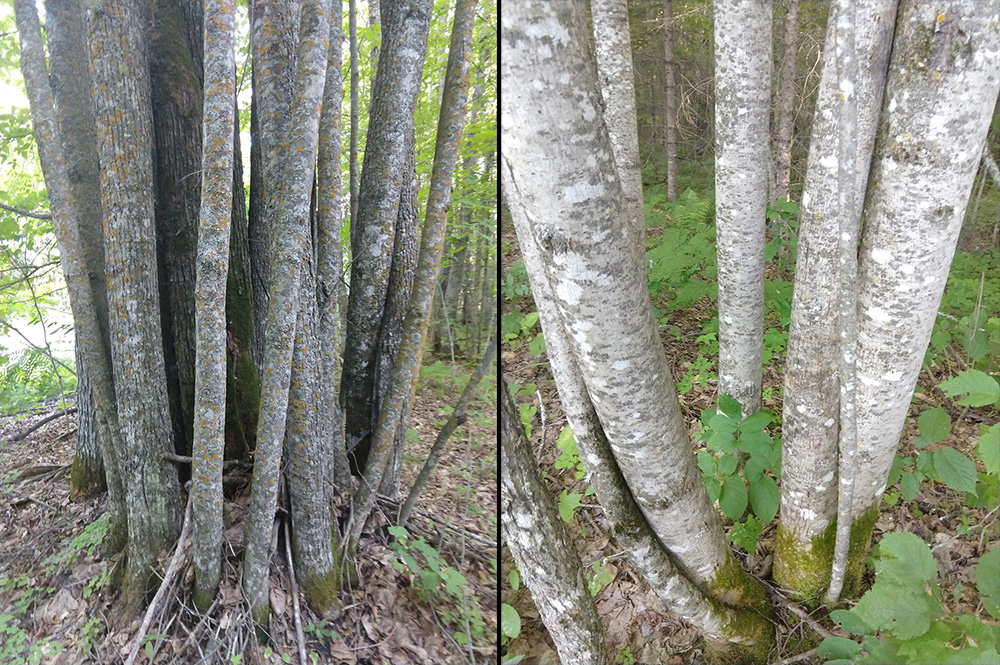 What kinds of things do we use in our daily lives? Rope and twine are items I use frequently. I don’t know how many rolls of sisal twine i’ve purchased in my life. The industrial processes for manufacturing goods are vastly different from any of my learning experiments. But I do still wonder, where did it come from? How was it made? I honestly have not looked into these questions much in terms of the specifics of production of sisal twine, but I do know that everything has an origin, and many people and places have been a part of it’s manufacturing, packaging, and distribution.
Though sometimes it feels as though it just appeared here on the shelf at the store, ready for me to purchase.
It’s an interesting way to think about the things we use- knowing that everything has a story and that something as simple as a roll of twine first grew as a plant somewhere. 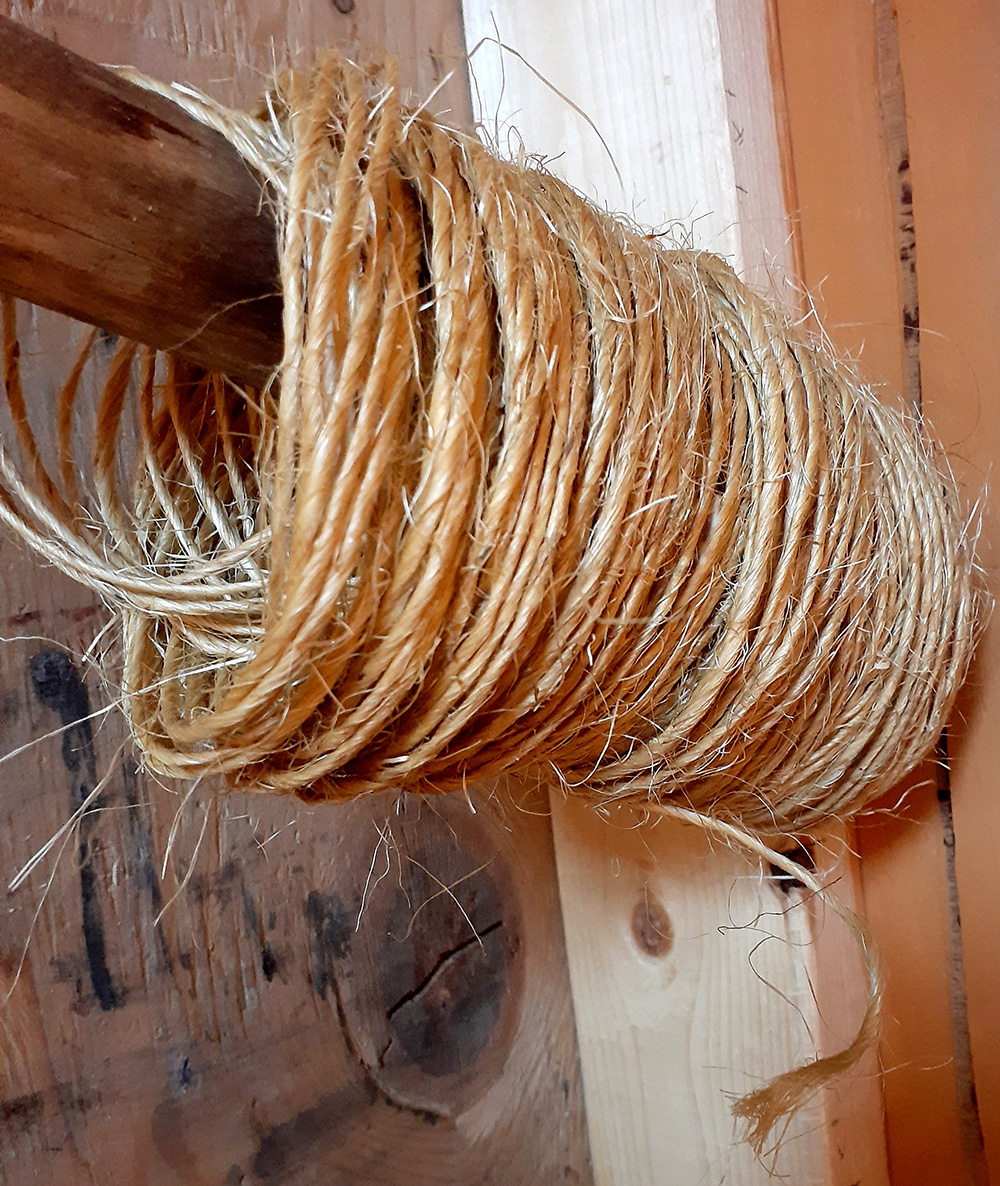