Porcupine Shrieks and Other Hunting Stories

In her latest blog post, Emily Derke examines the depth of the experience of hunting and how it informs her craft.

As the days get shorter and colder, I am working outside getting deer hides ready for tanning. With the sun setting at 4:10pm now, I am at times finishing up tasks by headlamp in the early evenings, and working quickly to ensure the hides don’t freeze stiff when I’m scraping them. I love the work of turning hides into leather. It is physical work that can leave my arms feeling like jello, needs to be timely and tended to, and much of it is best done outside.

I get to work in a shared space with other craftspeople, and in this season when I am focused on hide tanning, I notice the similarities between what we are all doing- creating something useful from raw materials. We are working separately, divided by walls, but making soft material in different ways. Elise is making strong felt with wool, Christine is creating woven cloth from linen, cotton and wool, and I am turning animal skins into leather. I often think about how all of our work is related- the work of creating material, vessels, and other usable goods. It is really special to see all this all happening in one room. Each thing we create can be traced back to a field, an animal, or a tree.

Wool felt by Elise,  Weaving by Christine, 2 types of leather by Emily

I headed out in early November to hunt at a friend’s place. I have only been hunting for a few years, and am learning so much each year. I love hearing people’s stories about all the animals they see when they are out, or the detailed description of every little step that a deer took on its way down a trail. I’ve been hoping to have more stories of my own to tell, but sometimes the woods are just so quiet. A squirrel can sound like a moose crashing through brush, while a deer can so silently glide through the woods without making a peep. “How do they do that?”  I always wonder when one creeps into view before I hear it.  I think a lot depends on the ground. Are the leaves crunchy or wet? Is there snow? Is it soft or crusty? And their hooves have such a small point of contact compared to our large human feet.  This year’s hunting season started off just thrilling.

At 5:15 AM as I walked through the dark to the deer stand, my headlamp caught a glow of eyes off to my left. 6 sets of eyes! They were just still and glowing and it felt a little eerie. I paused to see if there was any movement, but the eyes were frozen and looking towards me.  So I kept walking.

As I climbed up into the deer stand and settled in, something started making a wild scream. “A bird? A squirrel?  What in the world?” I thought. I sat and listened for a while, and knew I had heard this sound before. I remembered it, and recalled being puzzled by that sound each time I heard it.  It was loud, so I just sat and listened, finally realizing who it was – a porcupine! They have such a strange shriek that is all their own. I kept listening as the sun slowly started to show a little bit of light. There were a few big white pines nearby, a porcupine favorite. Eventually the sound ceased as the sun started to come up.

If you’ve never heard the sound of a porcupine, I found this site with a good sample.

Scenes from the deer stand:  warm days and cold days

As daylight emerged a group of deer came sneaking through the woods, working their way through the brush. I could barely see them but could count the group of four. All at once they came running straight towards me and barreled right under my stand and back into the woods behind me. “Wow!” I thought “I wonder if a buck will come next.”  Some times when does are sneaking through the woods like that and running at intervals, a buck is chasing close behind. He never did emerge into my sight.

I continued to sit, still and quiet, and heard what sounded like a bear trudging through the woods. I looked around to see where the noise was coming from. It was so loud, but I could not see anything. Finally it emerged… the porcupine! The leaves were dry and crusty that morning, and the porcupine scooted along the ground, with most of its body making contact with the crunchy, loud leaves. Lucky me, it was coming closer. 10 yards to my left was another white pine tree, and the porcupine was headed right for it. I watched it slowly climb, with its arms and feet taking turns as it moved upward. Every now and then it would stop to smell and listen. Porcupines have poor eyesight, so when you see them stop and smell the air, it’s as if they’re taking a look around to assess the surroundings.  It found its way to a branch and settled it. The time was now getting close to 7am. The porcupine resumed its shrieking, this time a little louder since it was so close. What a morning already!

After a period of silence, two more does came bursting through the woods, one to my left and one to my right. I wondered if one would cross back in front of me to find the other, but I didn’t see them again. Some time had passed, when next a hawk landed at eye level in the tree beside me. Not knowing all the hawk species, I quickly tried to take note of all the little things people typically look at on birds.  Markings on the tail, the breast, the head, etc.  The hawk had swooped in and landed, looked over at me as if to acknowledge my unusual presence up there in the tree, and then was soon gone again. What were the markings I noticed? Hm… maybe note taking in the stand should be a part of hunting. I’ve concluded it was either a sharp shin or a cooper’s hawk.

Now that it was getting towards late morning, it felt like the woods was quieting down. I had at least an hour of silent sitting with just a few squirrels bustling around. Off to my left, I caught sight of a deer sneaking through the woods coming towards me slowly. It looked quite small, probably a fawn, and kept looking back to see if the others were coming. I kept myself entirely still as I waited to see who else would emerge. The fawn would take a few steps, look back, put its head down and then take a few more steps. It must have been 5 minutes since I first spotted it coming, but no other deer were following close behind. The fawn kept coming towards me, eventually walking right under my stand. I sat up there in the tree looking down as it looked up at me. We stared right at each other for quite some time, each of us observing the other. The fawn would occasionally look back on its trail to see if anyone was coming. I occasionally looked back there too. In a split second, I watched as a coyote trekked along the trail where the fawn had emerged. It did not turn down towards my stand like the fawn had, but kept trotting onward along the ridge. The fawn resumed its pattern of looking back, grazing, and taking a few more steps away. Slowly, it continued onward through the woods and out of my sight.

The silence and stillness resumed. Hunting is an interesting experience. I have to stay alert and present and can’t travel too far away in my mind, all while staying so still and silent for many hours at a time, but making sure to be attentive to anything all around me. One small sound can make my heart start racing, wondering what it might emerge next.  In a quick but silent burst, a hawk flew through the woods following the opening of the trail I was near. This one looked different than the last, and I only saw it in flight. A broad winged hawk, I determined. This short encounter was followed by more silence. As I was scanning the land around me, I turned my body to see directly behind. There was the group of four deer from earlier in the morning! It looked like it must have been the same group. They worked their way through the woods and out of sight. A few moments had passed, and I looked back towards the same area. I couldn’t believe those four deer had moved so silently back there. Then, a lone deer trotted along on their trail. I couldn’t get a good look at it, but I thought that it very well could have been the buck chasing them around.

What a morning it was! I sat until it was time for a break, with no deer to bring home, but I called the morning a raging success. Time well spent.  I’ve made maple syrup in these woods, pulled bark off of trees and made it into rope, and spent a great deal of time with good friends at their home here, who so generously let me come to hunt. 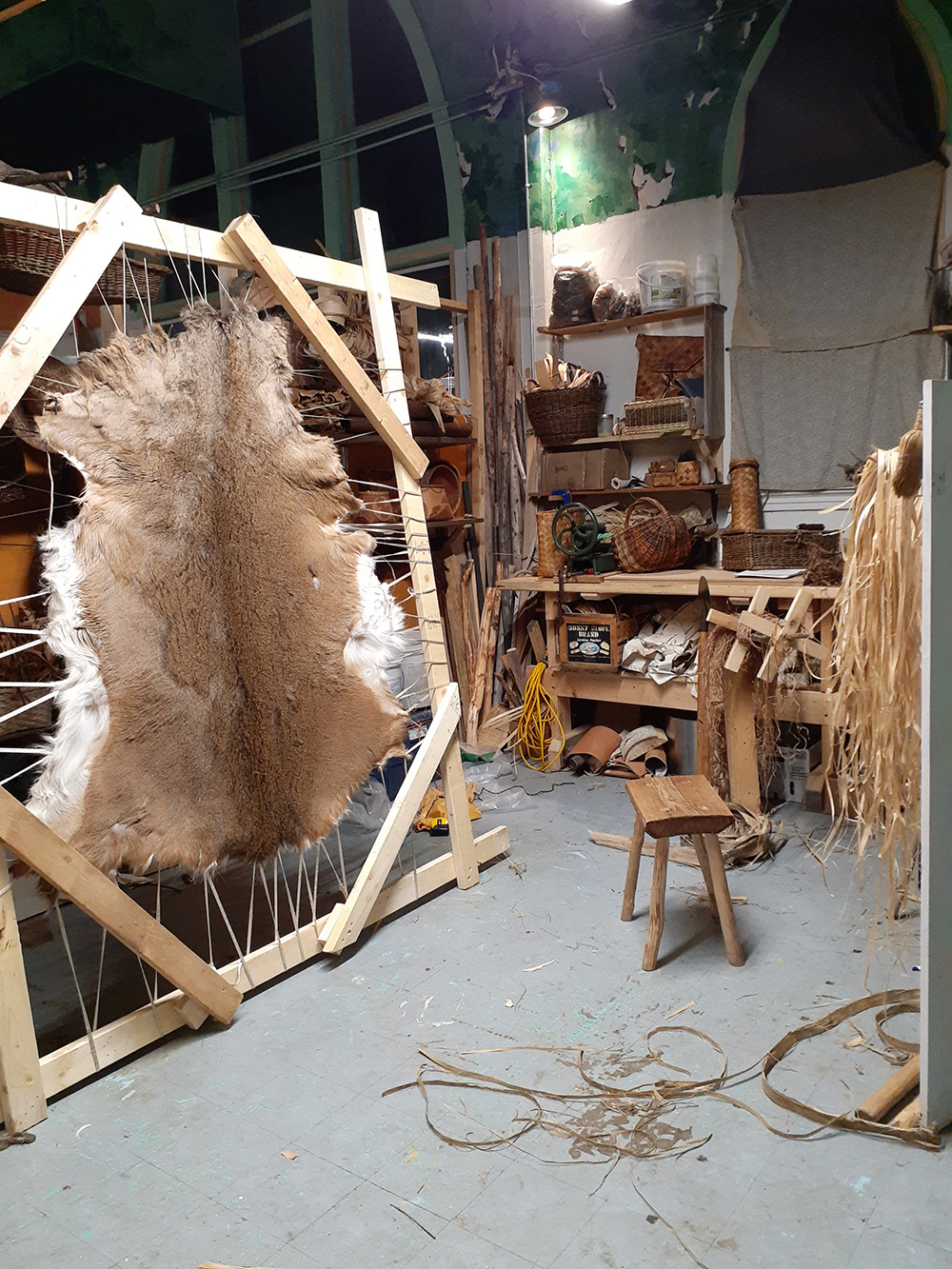 A look inside my workshop

From an recent article in Orion Magazine by Dean Kuipers

At the end of the season, I returned to Grand Marais with a pile of deer hides to work on. As I collected the hides from other friends who hunted, I got to hear the stories of their time in the woods. The hides are really interesting. One shows how the bullet hit the brush and fragmented before making it to the deer. Many hides have scars, telling some clues about what the deer has been up to.

And then there is the meat. What a special thing to have a story and connection to any of the food we eat!- something that was normal for most of human history. 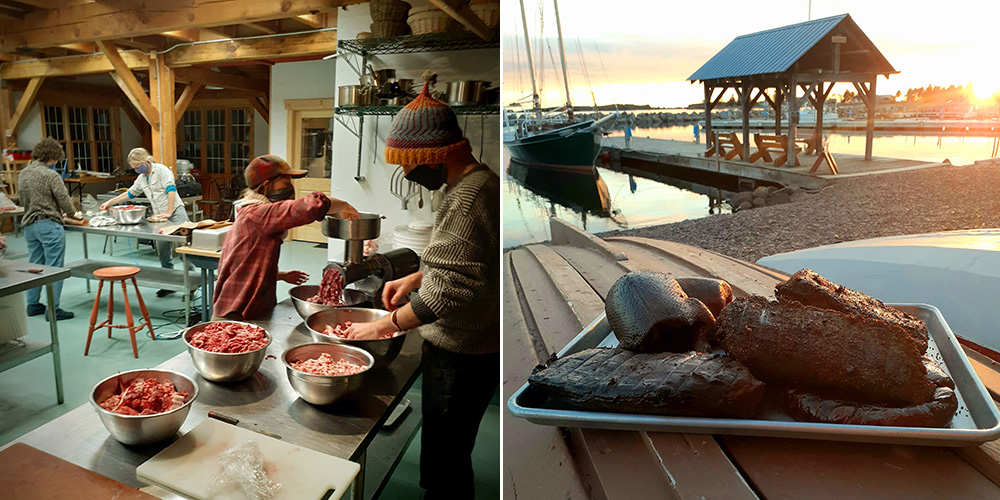 Friends sharing the work of deer processing, Smoked pastrami and other meats