John Beltman and I led 6 students in a project to build a replica of a Herring Skiff.

I just finished a week long class at North House in which a project I have been planning for 7 or 8 months finally came together. John Beltman and I led 6 students in a project to build a replica of a Herring Skiff. The original boat was built by well-known local builder, EJ Croft in the 1940s. A man named Russell Zerbach fished with it out of Colvill (just outside of Grand Marais, where North House is located) and sold his fish in a roadside stand on Highway 61.

As is the case with all boat building classes at North House, building the frames and planking the boat was an ambitious goal for 7 days. We had a really great crew that worked well together and kept up a positive attitude. By the end of the class on Sunday we were just putting on the last plank.

Being the first time we built this particular boat there was a bit of a learning curve that we were going through as instructors along with the students. In a perfect world maybe we as instructors would have known what the problems would be and help the class prevent them. At the same time, learning to troubleshoot three dimensional problems is part becoming a good craftsman.

Neither John nor I had built a boat the way this boat is built. Based on the way the boat looks and our experience as builders, we have some pretty good ideas of how the boat was built, but we don’t really know how EJ Croft built it. We’d like to talk to old timers to find out! At any rate, whether through errors in the lofting or in the transferring of data from the lofting to patterns and into frames, we had a very hard time getting the frames to fair together.  It took a good day of fixing frames and head scratching to get the frames actually ready to plank. If we know how EJ built the frames, they might have turned out better the first time. And next time we build the boat, rest assured it will go more smoothly. 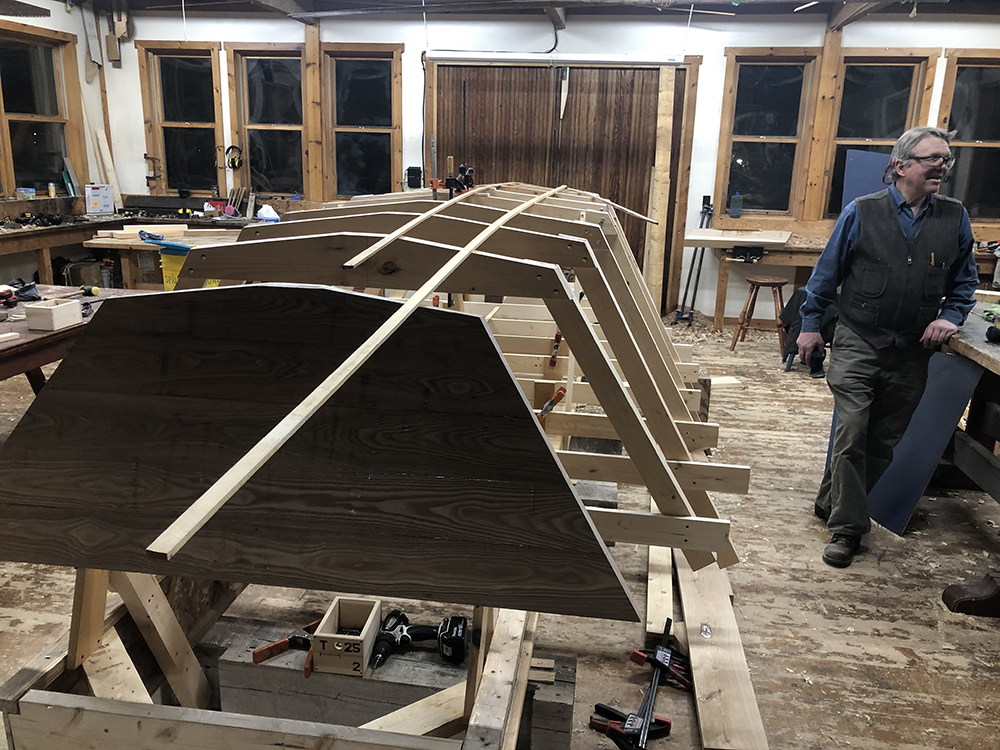 Planking the boat was pretty fast. However there were a few tricks we learned. All of the strip planks are edge nailed to the planks next to them. Where planks join the keel at an oblique angle, there were a few accidents where nail came out the middle of the keel. Another challenge were the garboard planks.  The garboard is the bottom plank, in this case the plank adjoining the chine. This plank is the only plank that is not a strip. It is cut to a curved shape from a wide board of wood. The challenge that we hadn’t totally thought through before the class was how to accomplish the twist this plank needs to take as it approaches the stem.  We could get the twist and weren’t prepared to head the plank up enough to accomplish the job. Luckily, Dave Seaton was building Ukuleles in the building next to us and had his heat blanket for wood bending with him. We figured a way to rig this up to heat the garboard plank and eventually got it twisted into shape. 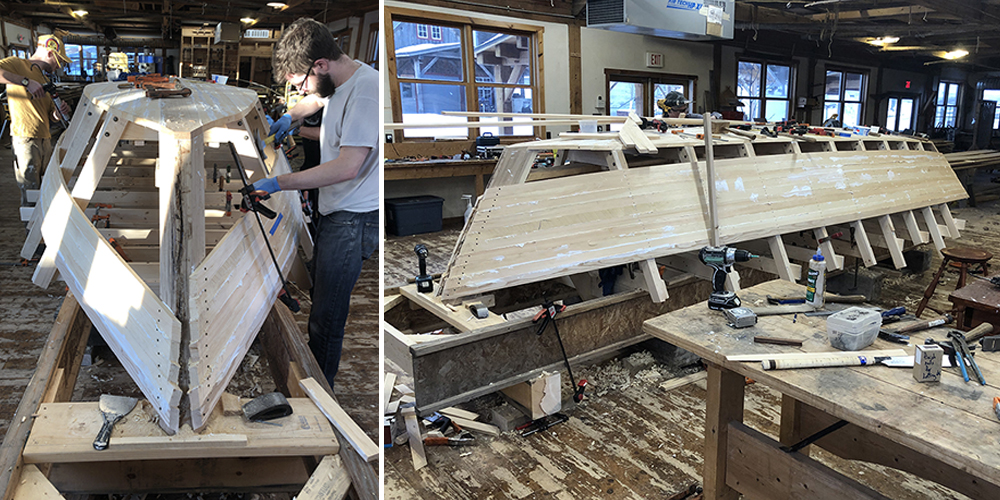 So After 7 days, the boat is planked. Now, it will sit for a few months while I go to Norway, and await our summer of community boat building. We will work on finishing the boat 2 days a week down on North House’s campus. Then it will be launched at the Fisherman’s Picnic.  If you are interested in helping build seats, or knees, fairing the hull and painting, stay tuned for details on the Community Boat Building. 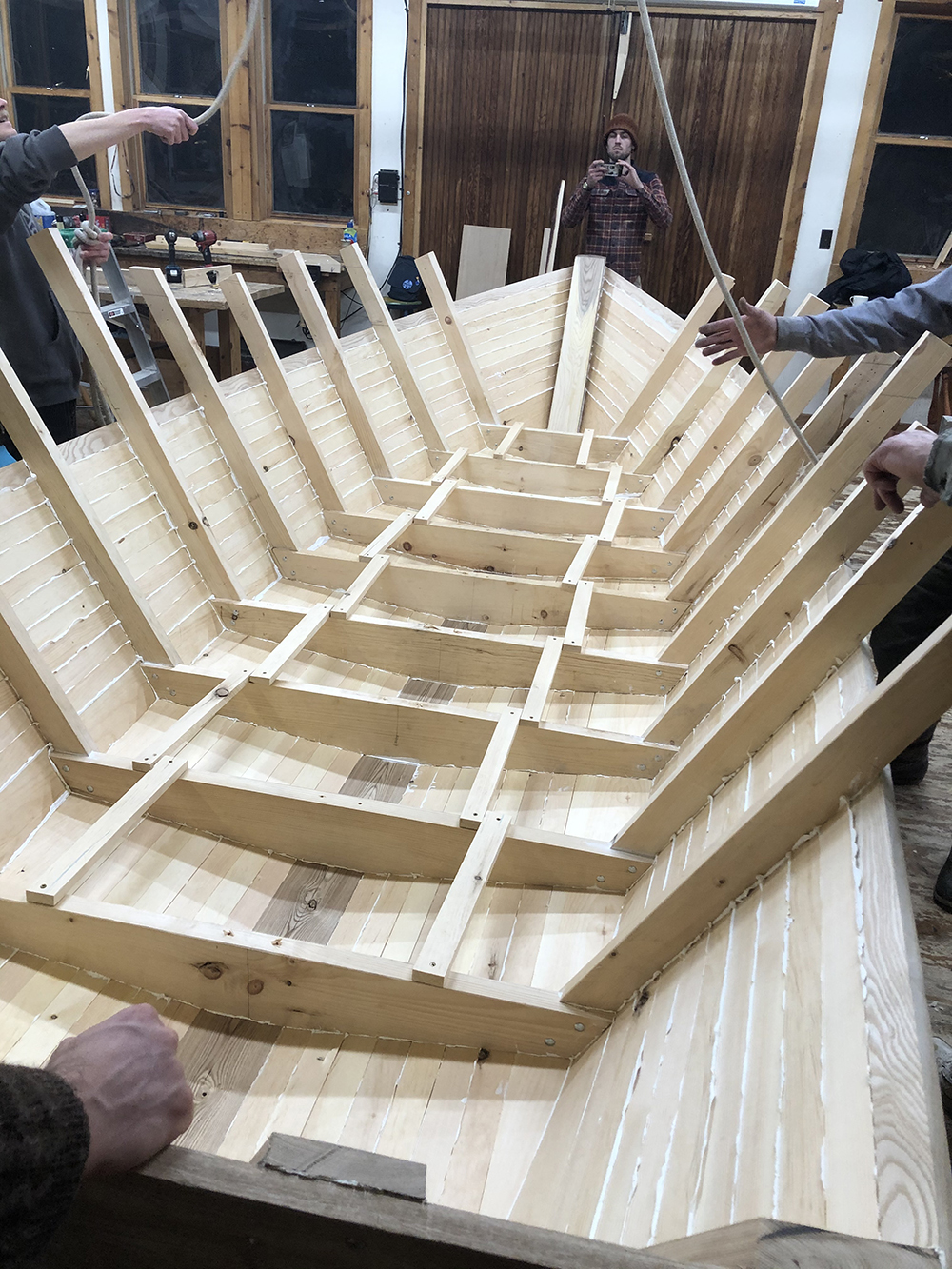 The Cook County Herring Skiff Project is funded in part by the Lloyd K. Johnson Foundation.