There is a great hiking trail at the far western edge of the Grand Marais Recreation Area that winds up Sweet Heart’s Bluff and provides some beautiful scenic vistas of the lake and the harbor. Earlier this summer I was hiking around up there and noticed that the two picnic shelters that are tucked along the trail had significant rot in some of the beams and posts. It would only be a short matter of time until they became unsafe. As a person who loves to hike back in that area I thought about how fun it would be to build some replacement shelters that incorporate my interest in building. I casually brought this up with a few a people and found out that Anne Grinager, one of the talented interns here at North House, was having similar thoughts. Anne has experience as a timber framer and they and I both have been wanting to learn more about designing frames. Both the internship and the Artisan Development Program include a community component designed to share our personal passions for craft with the community so this project concept was a perfect fit. 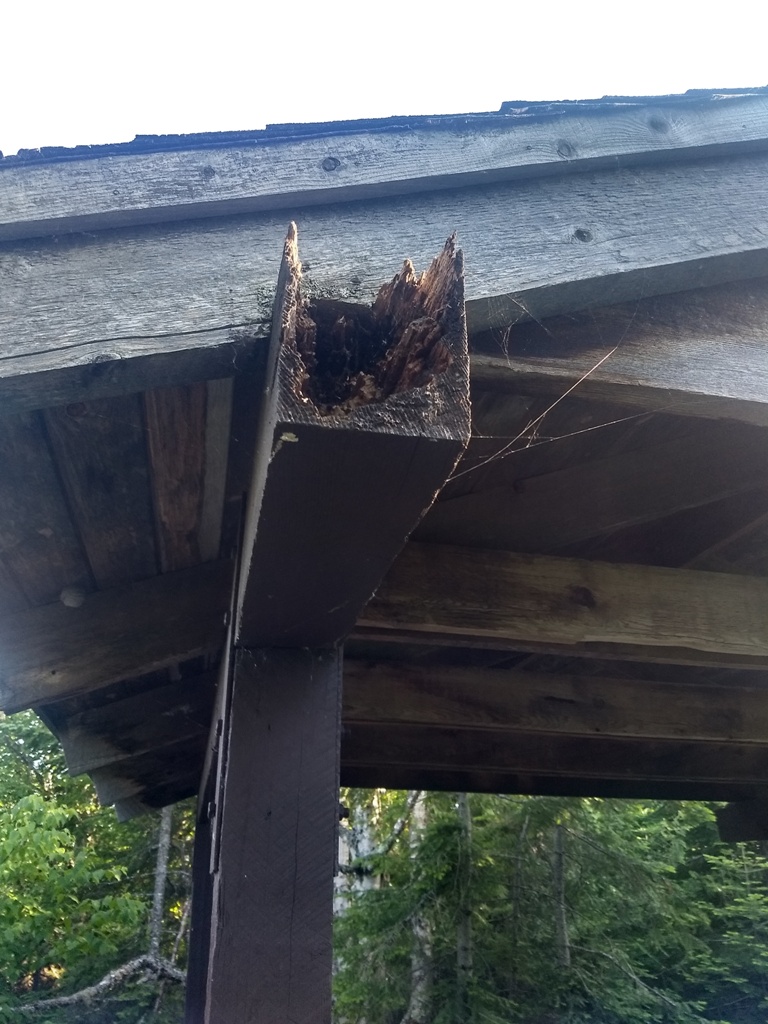 To get the ball rolling we documented the damage on the existing shelter, put together a materials estimate for structures with an identical footprint as the existing shelters, and presented the idea to the parks board. The project was well received so we began modeling different potential frame designs using a handy computer program called Sketch Up. After Anne and I went through a few iterations we settled in on some designs. Here’s a few shots of the models.

Peter Henrikson is a professional timber framer and instructor here at North House that is a mentor to both Anne and I. He helped us to tweak our designs so they were engineered appropriately.

I’ve been fascinated by grindbygg, a vernacular Norwegian style of timber framing commonly found along the SW coast. One of the building sites along the hiking trail comes to a pocket right on the shores of the big lake. Grindbygg frames were commonly used as boat houses and outbuildings for fishermen so I was excited to be able to build one close to the water. Check out a few of these examples from Norway. 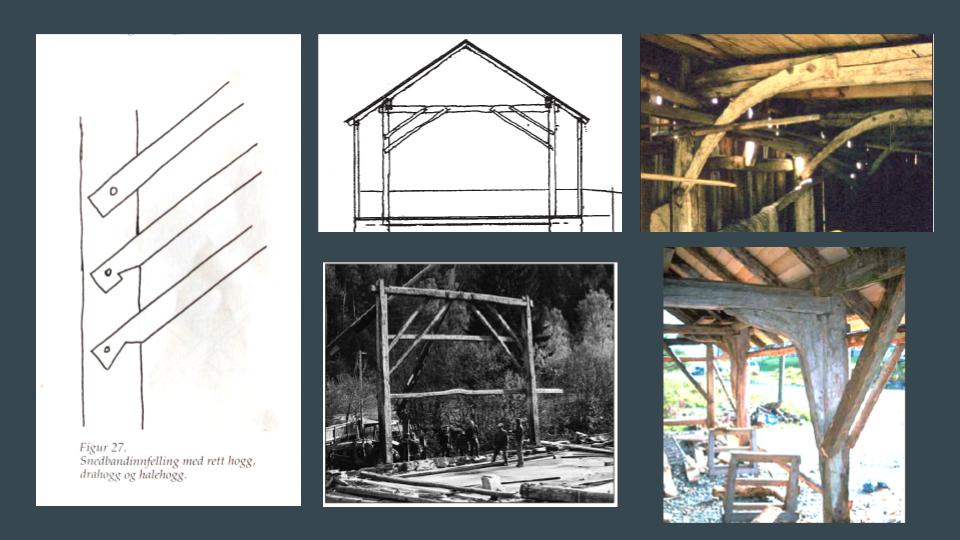 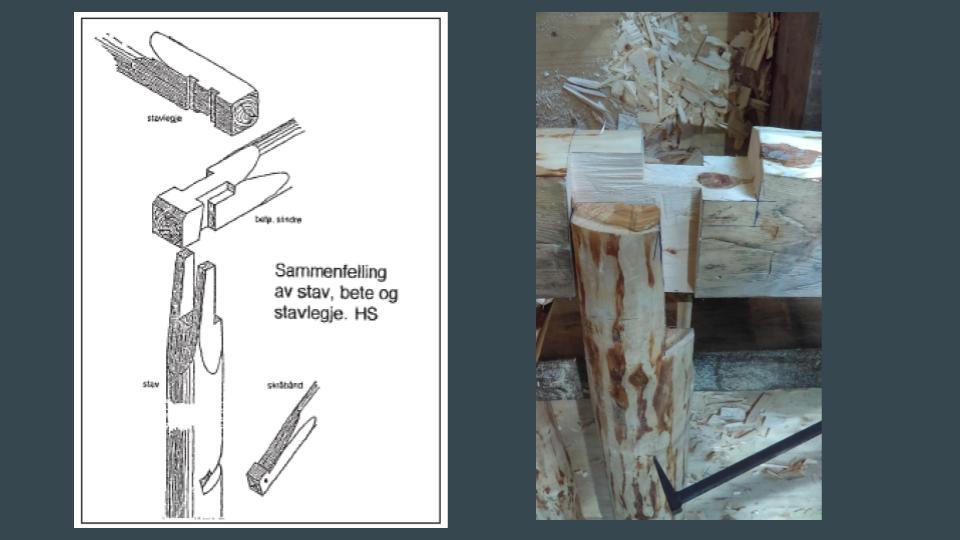 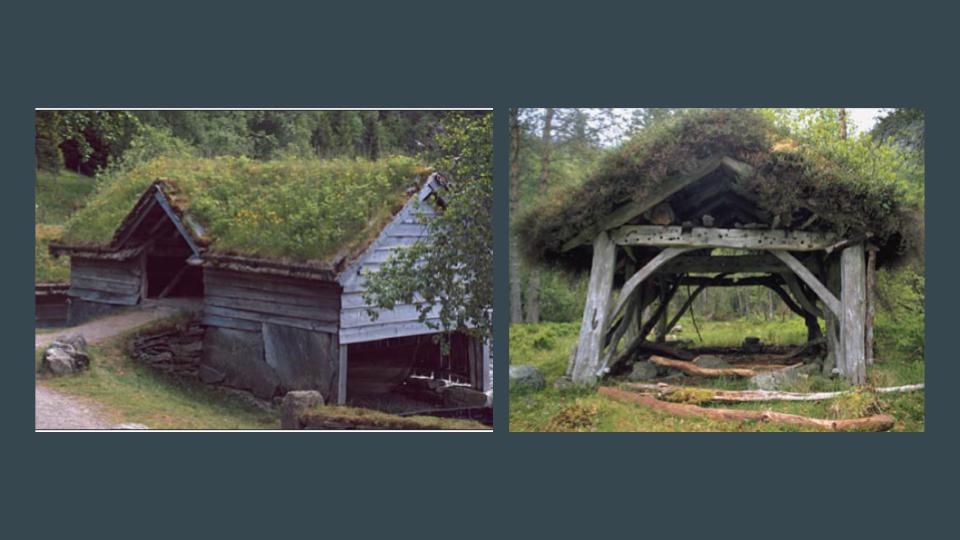 Once the designs were finalized we put in our timber order and prepared to cut the frames. Thankfully it worked out for us to work on this project in Peter’s well equipped shop which really made our time efficient. 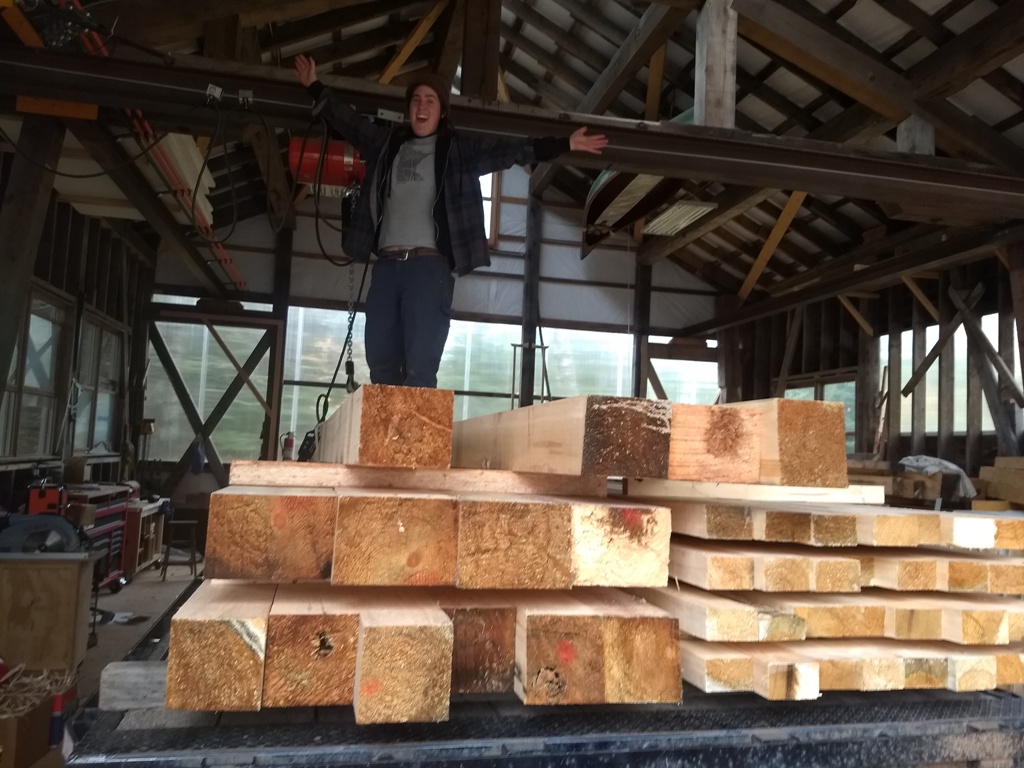 In a whirlwind of saw dust and sharp chisels we cut both of the frames in 9 days. It was really informative to work on two different designs back to back. Not only do they look different but the joinery and process of cutting the two frames is quite different as well. 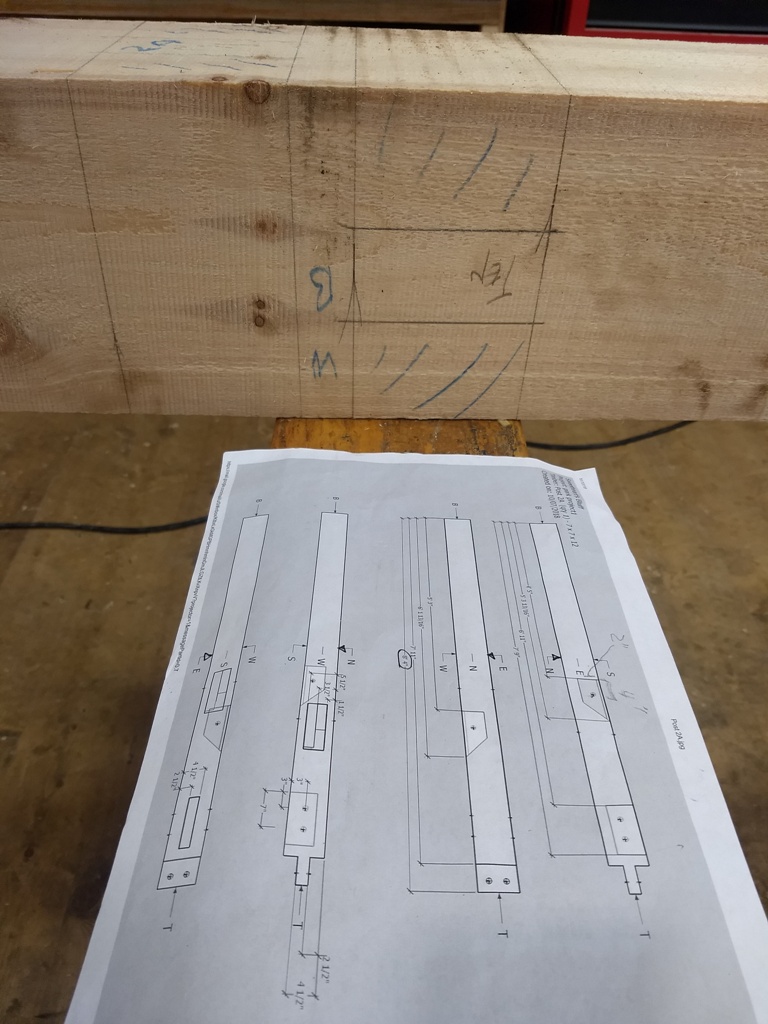 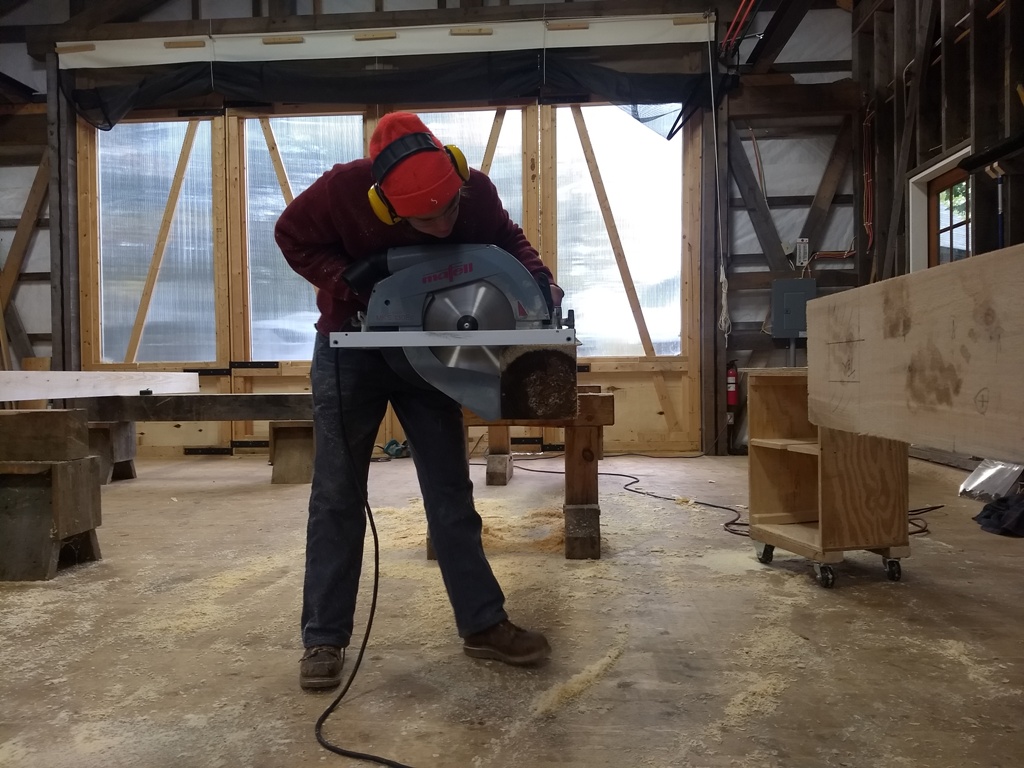 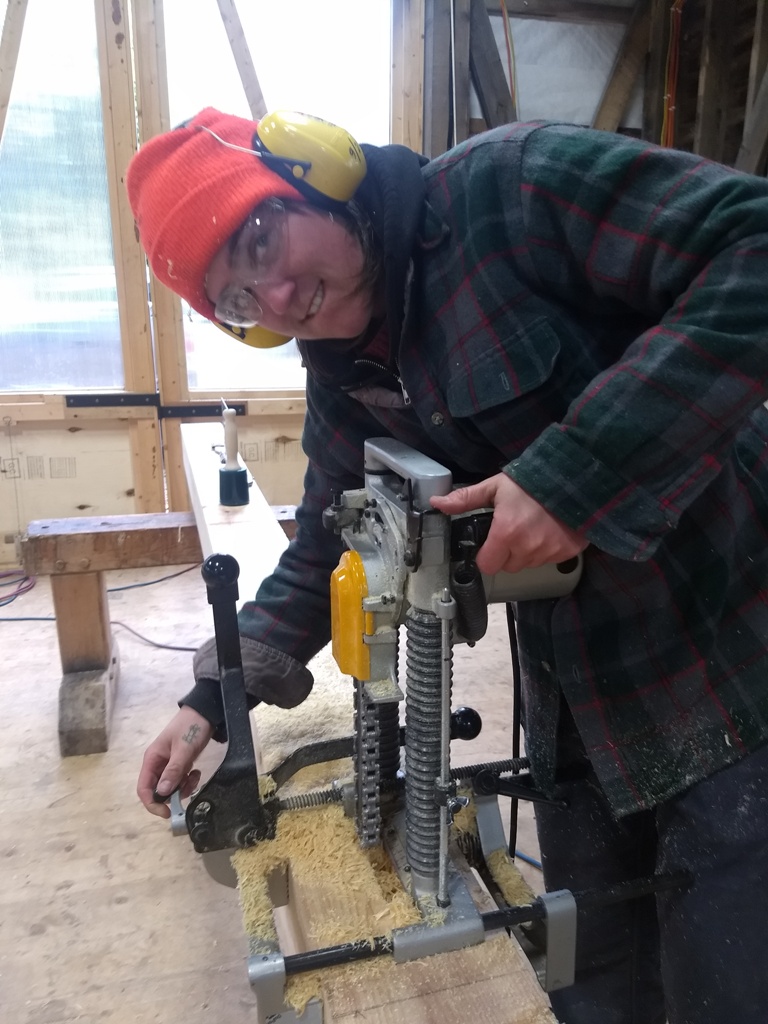 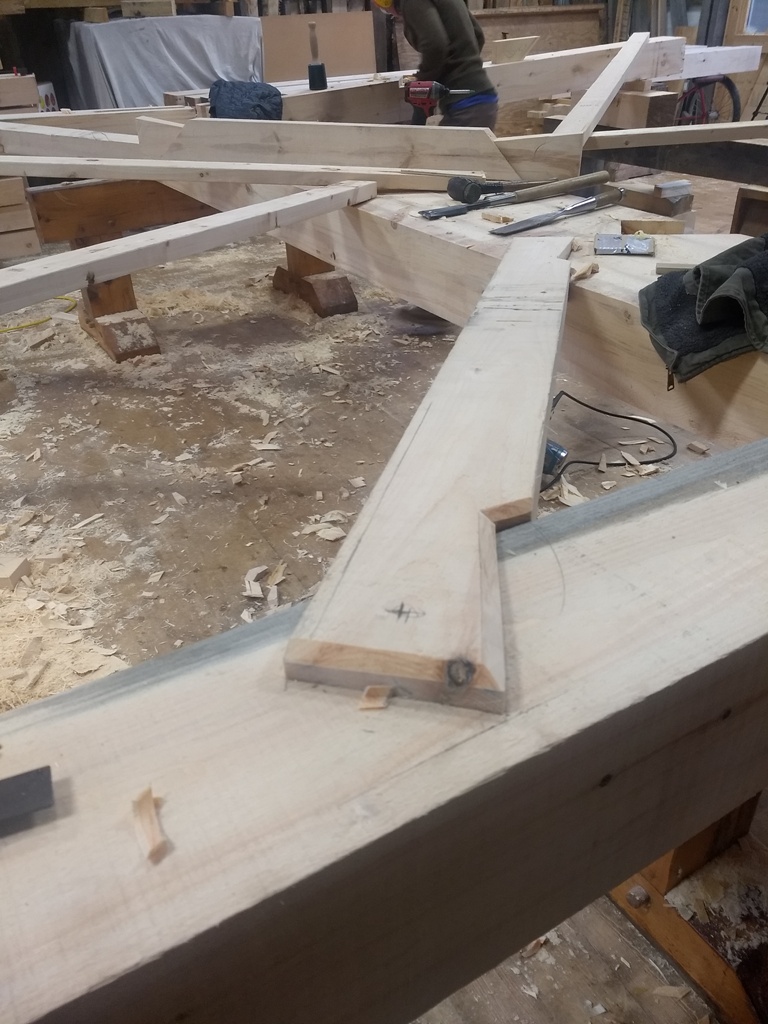 Anne designed a beautiful queen post frame and they were able to teach me a bunch of tricks learned in their years of working in a production timber framing shop. Collaborating with Anne was a blast! We were working hard and having a lot of fun. 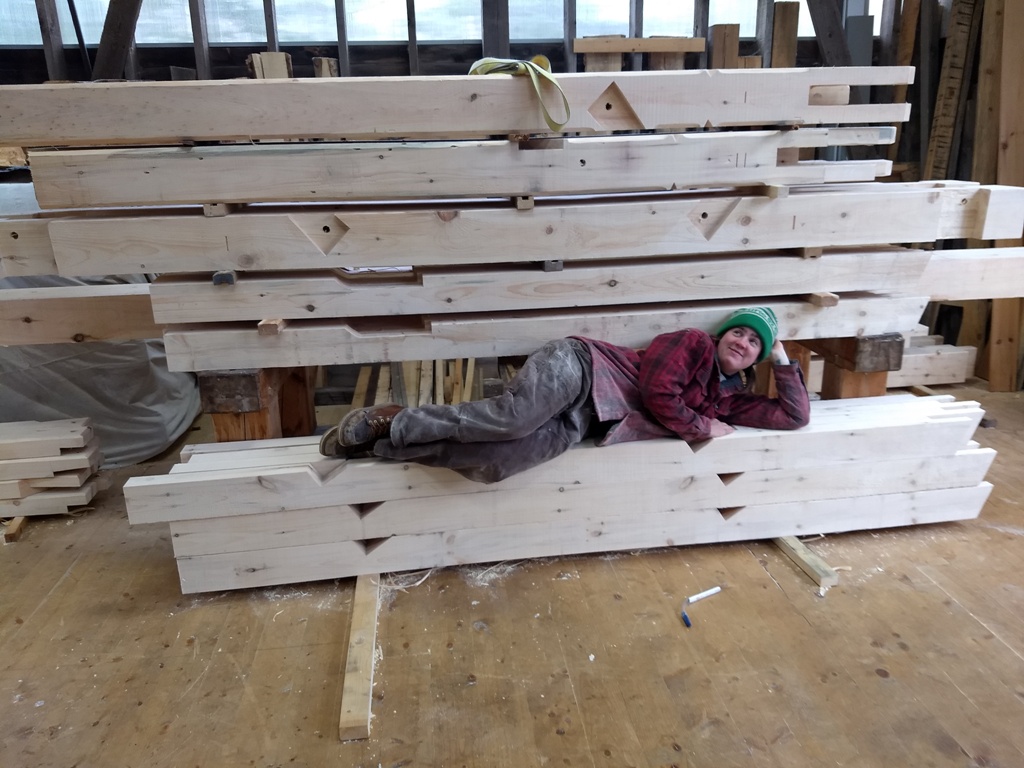 Once the frames were cut the daunting part of this process began. The timbers were staged at the trailhead, but because these sites are in beautiful tucked away places we needed to carry all this material in along the trails. 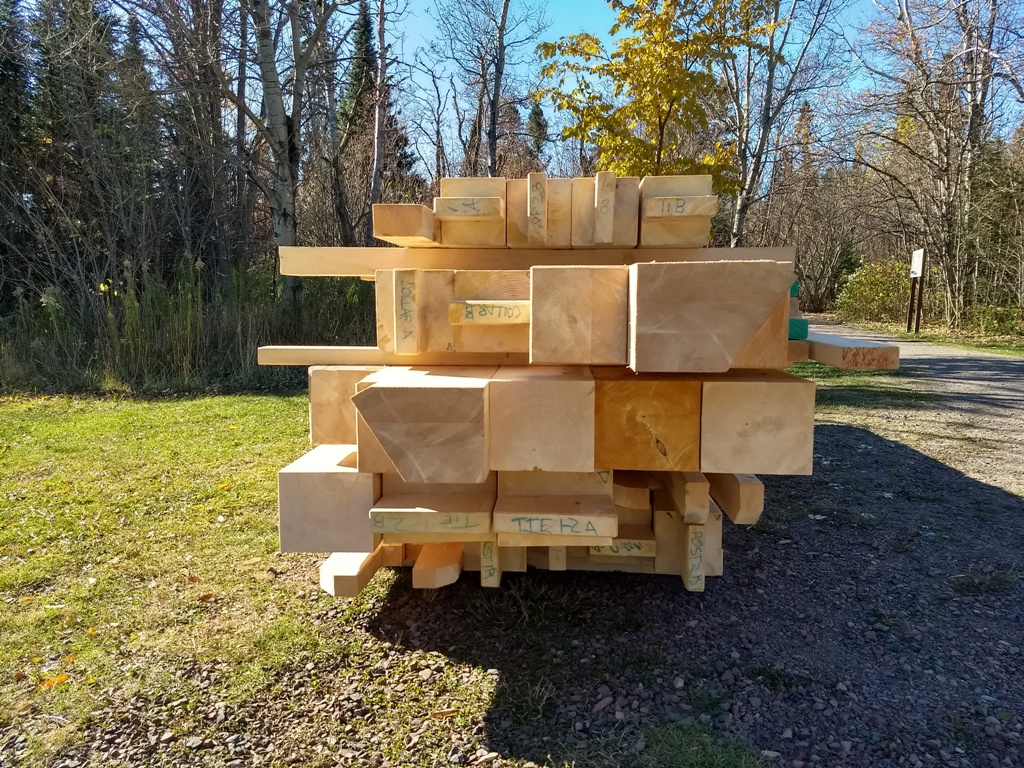 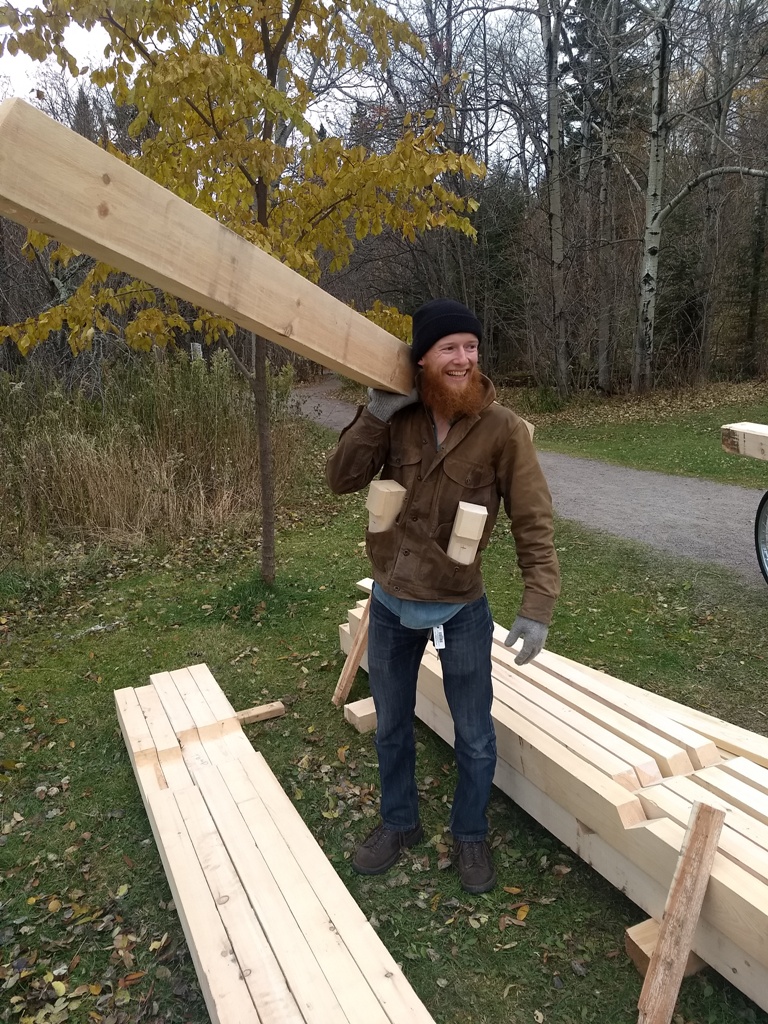 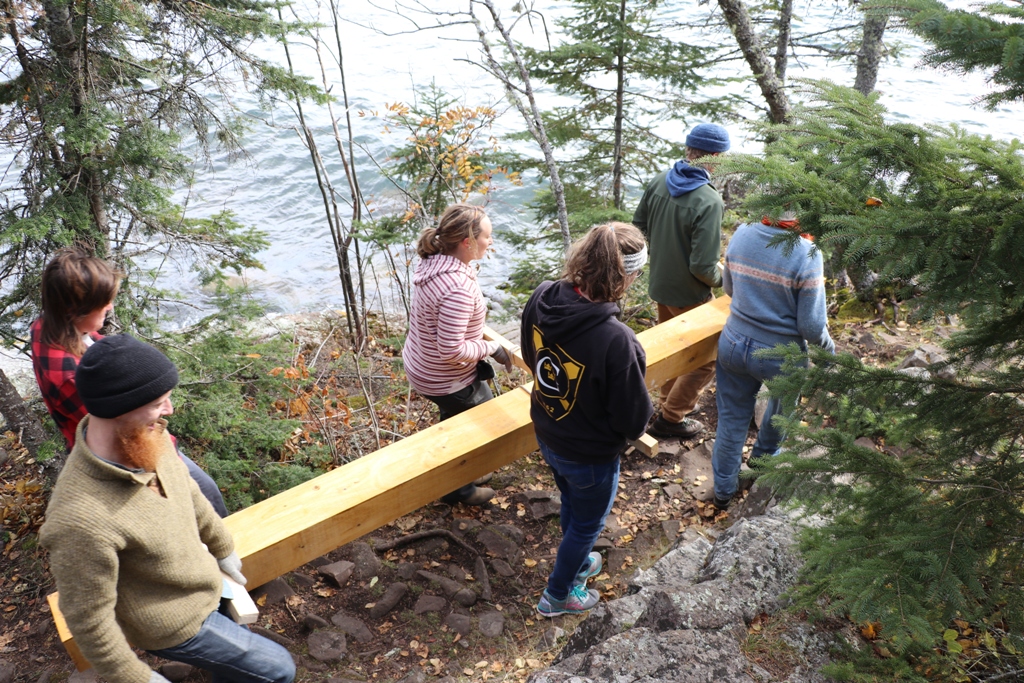 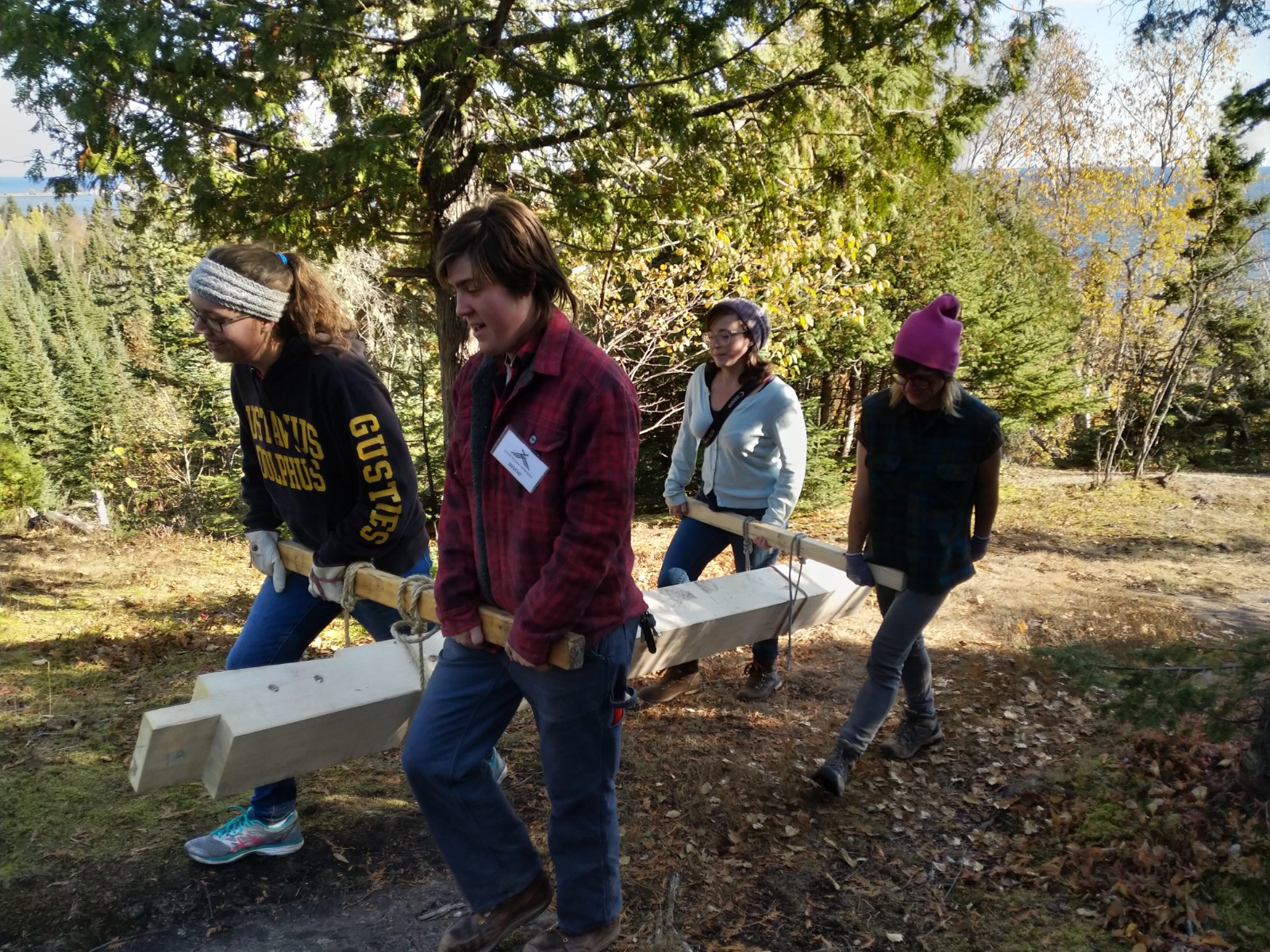 Our pieces were custom cut and therefore fresh off the mill and quite green. Green wood is wet and super heavy. Thankfully we had an amazing crew of volunteers join us for the raising. Thank you to everyone who showed up for the heavy lifting! The entirety of our first day was spent carrying timbers and staging them near their future homes. 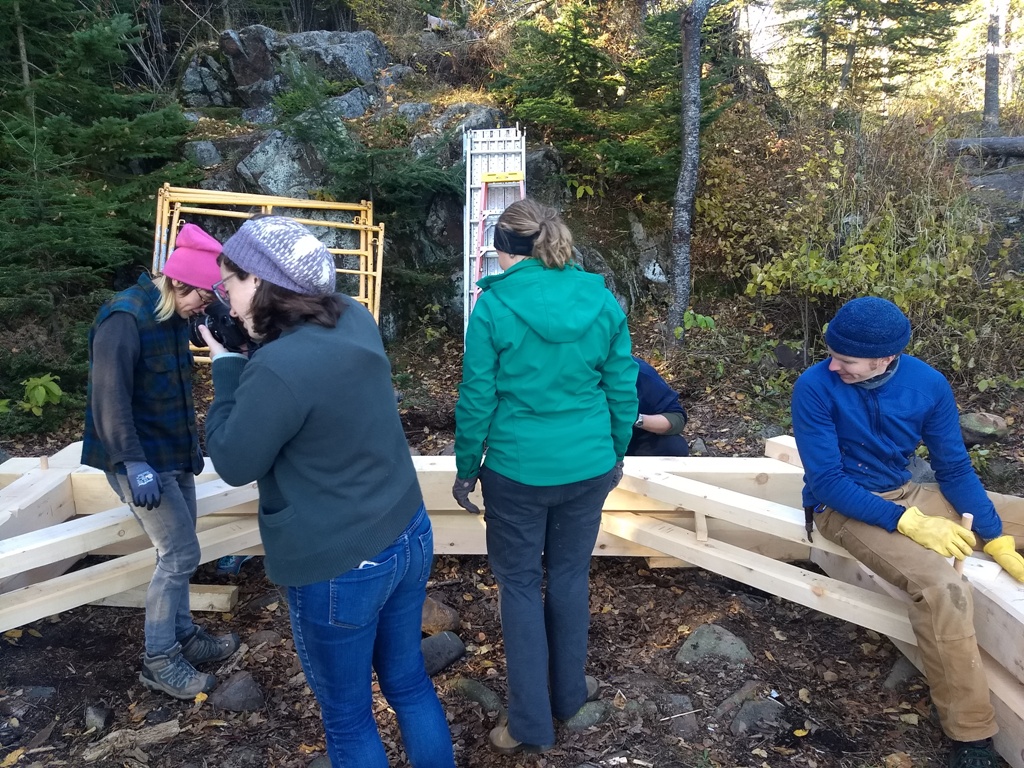 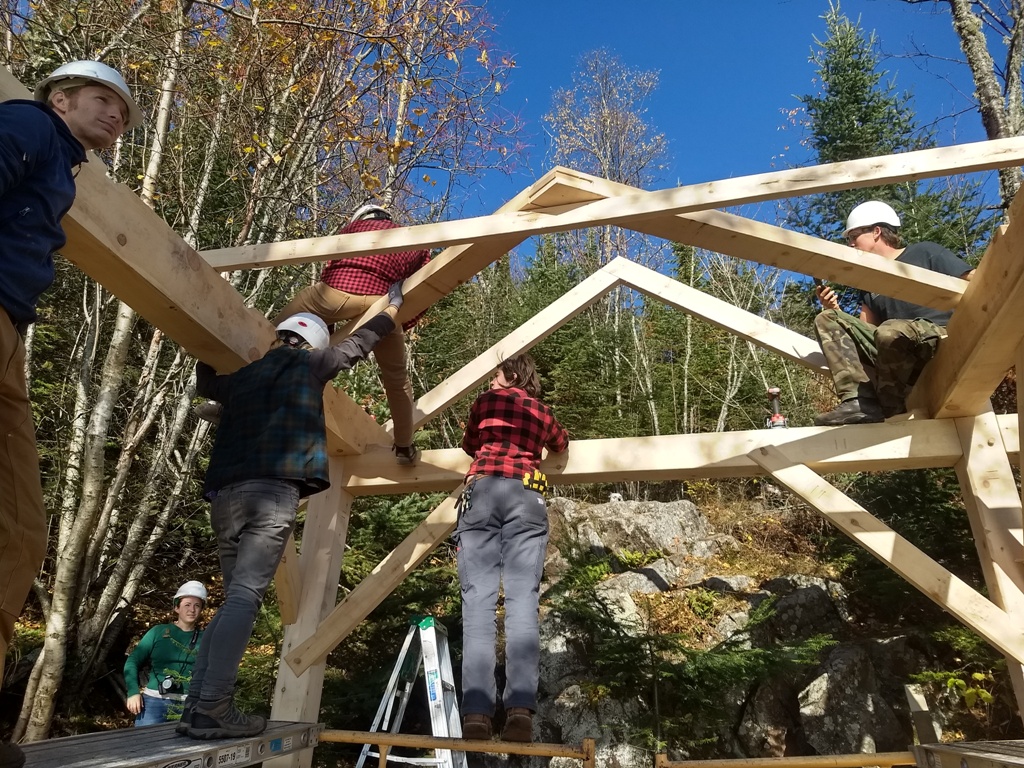 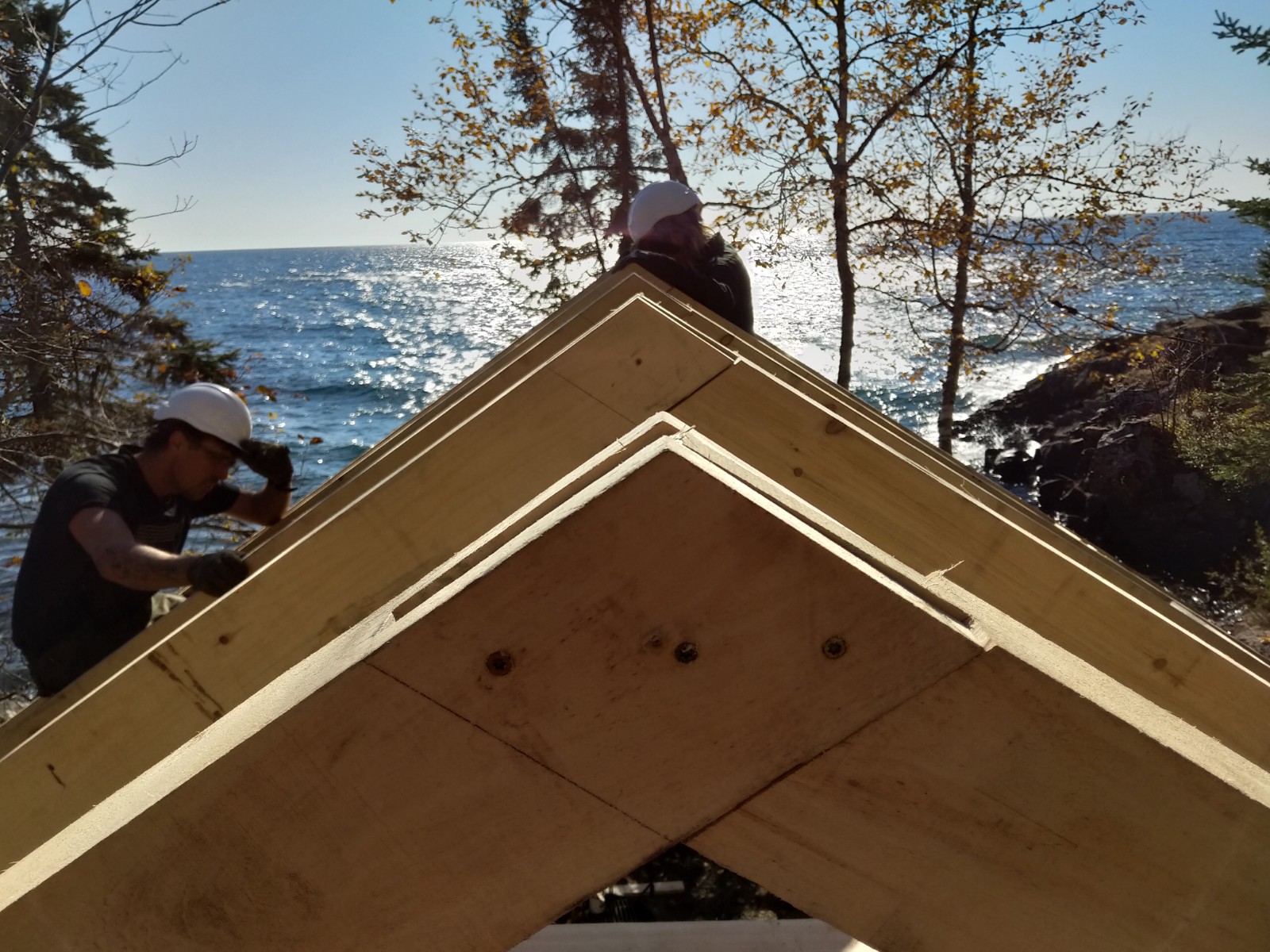 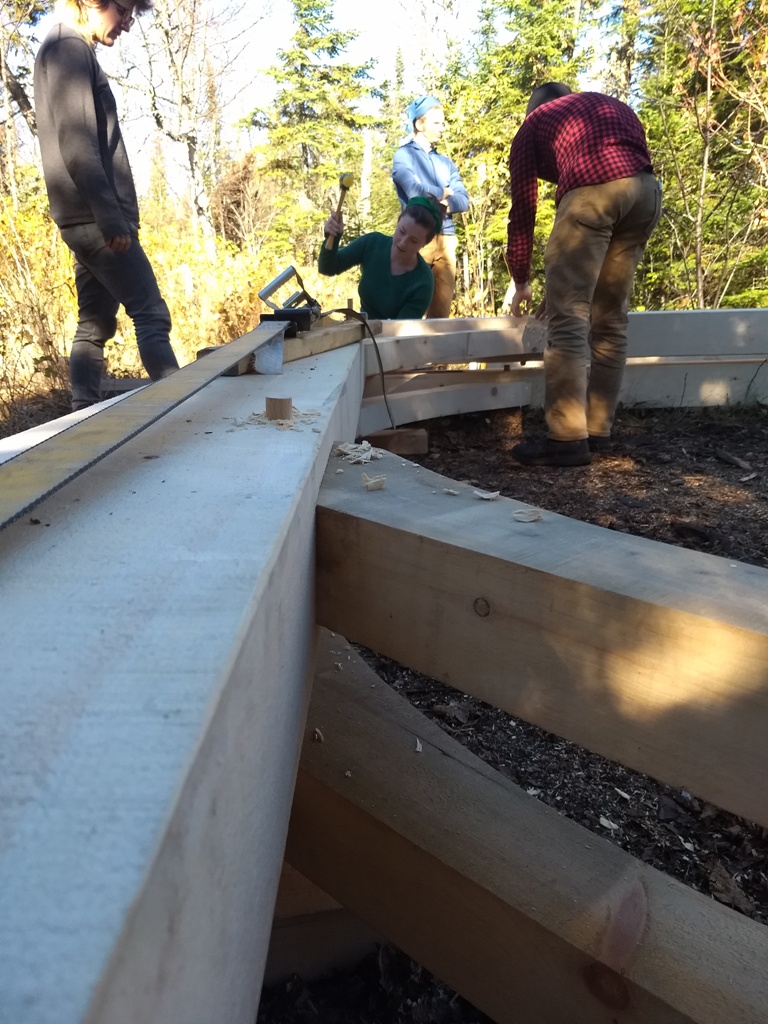 The queen post frame was destined for a beautiful bare ledge rock location with a spectacular view of the harbor, but in order to get our heavy piece up the trail we needed 6 people to carry each beam along a narrow rocky trail skirting a small cliff edge. Fortunately for us the weather was amazing. Icy rain would have really thrown a wrench into the whole plan. 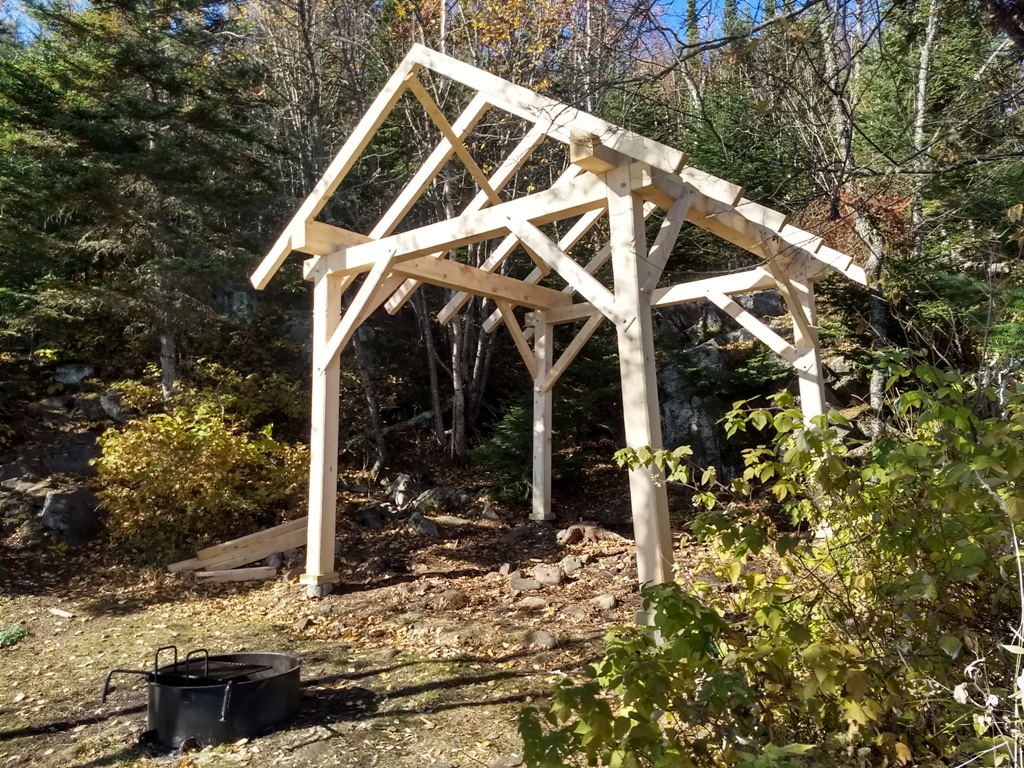 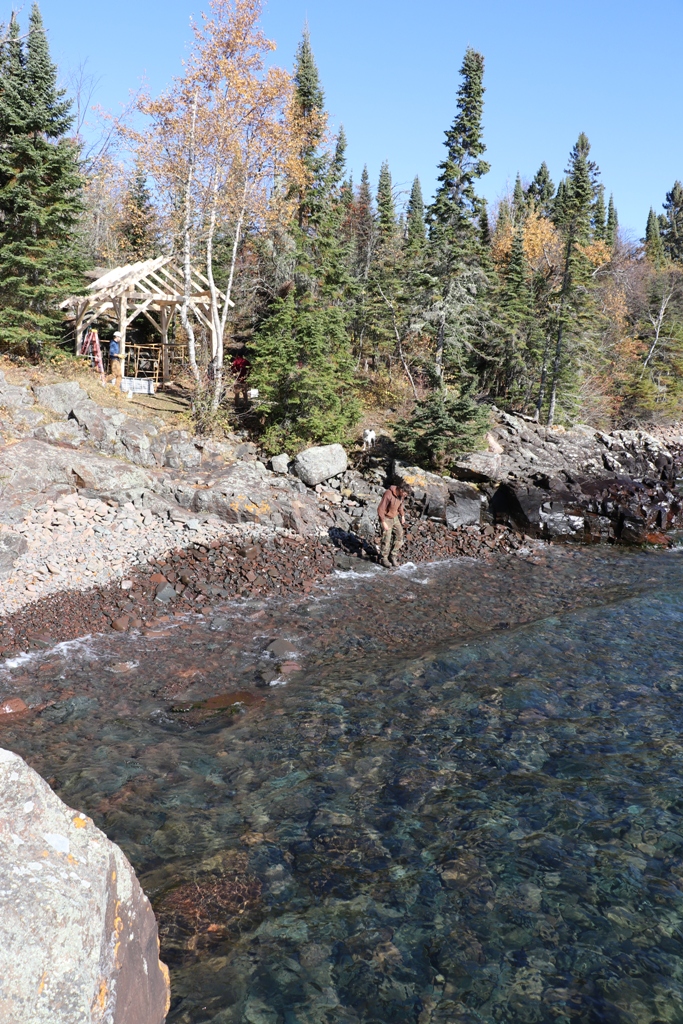 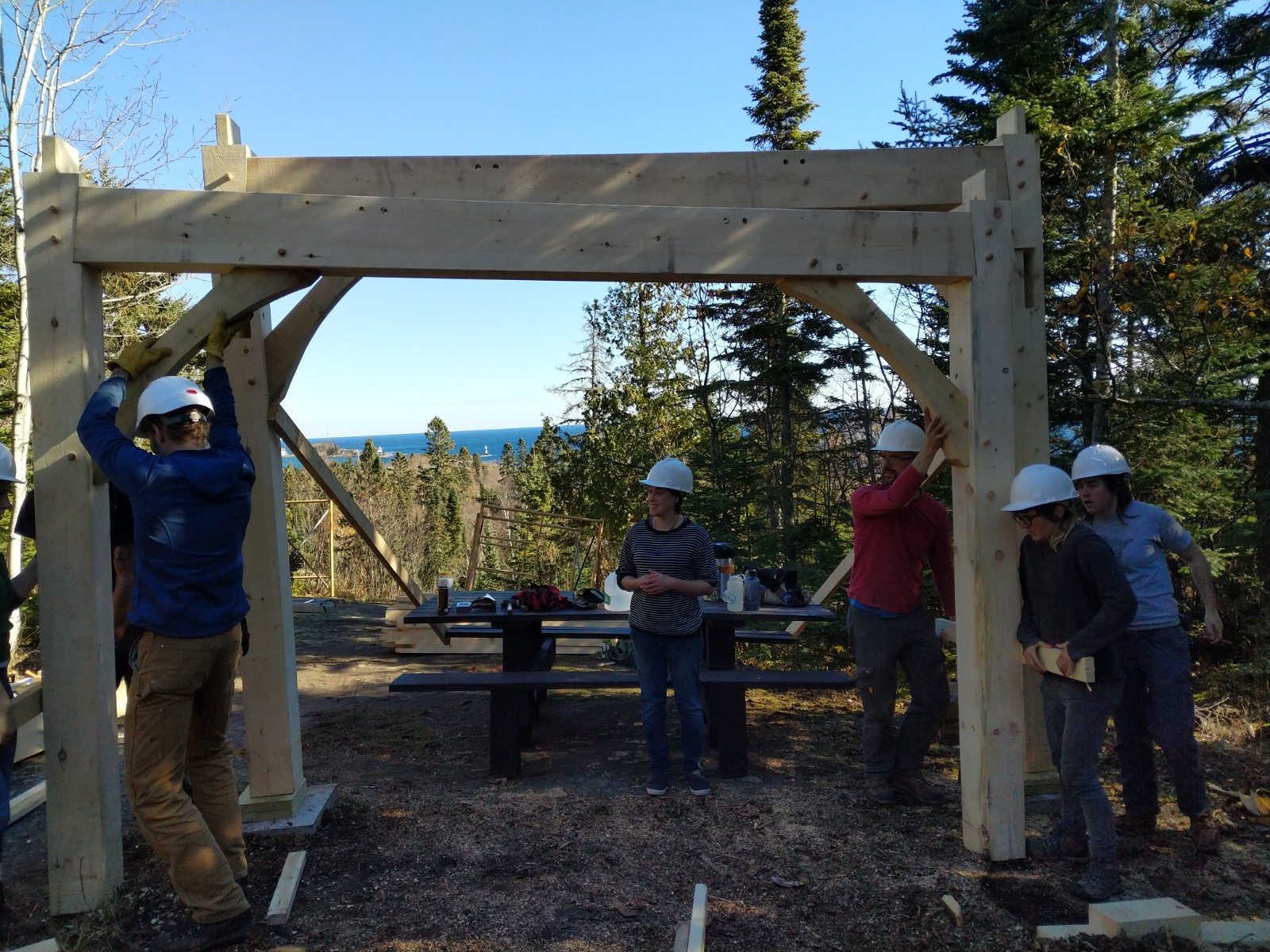 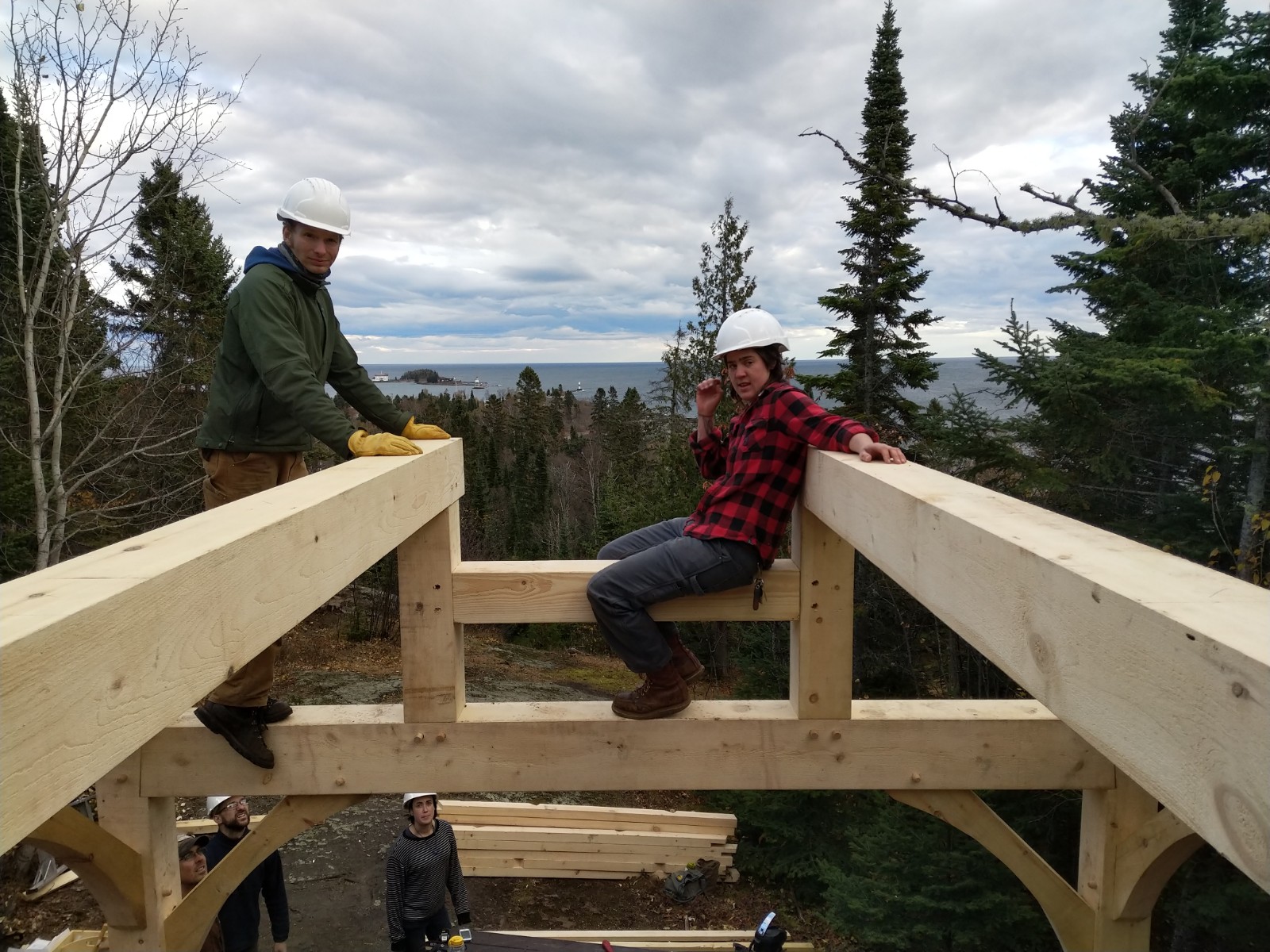 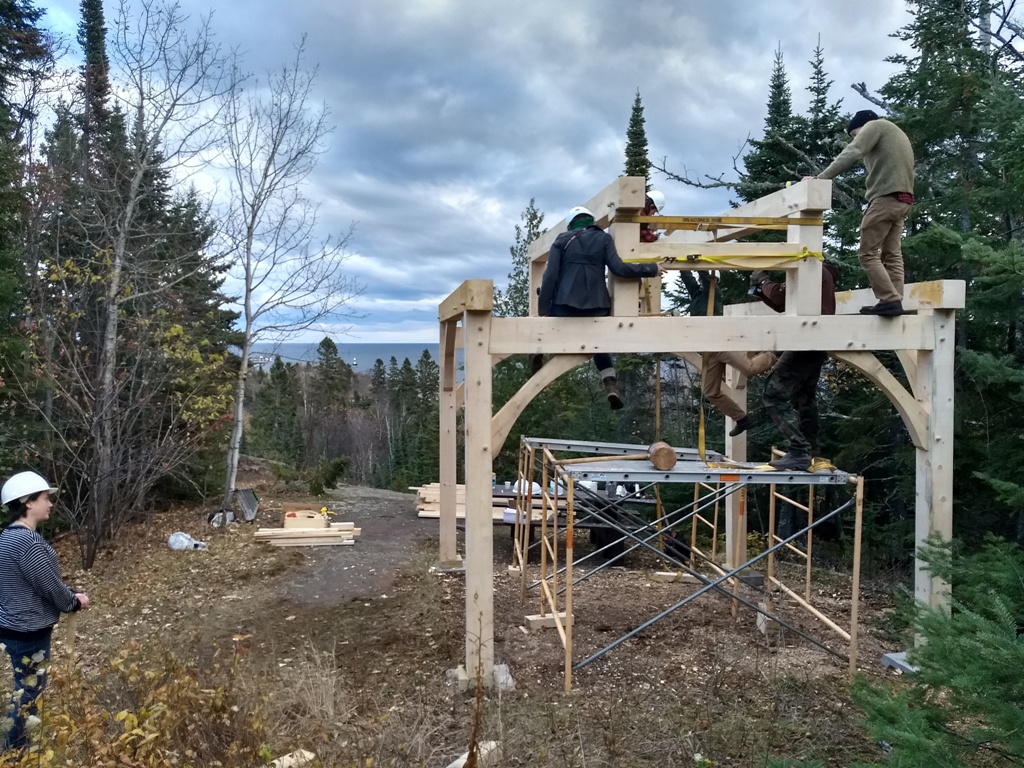 I’m happy to say that the frames are up and they look charming. I’m biased of course so I encourage you to go look for yourself. They are along the outlook trail on Sweet Heart’s Bluff Nature Area located at the far west end of the Grand Marais Recreation Area. The frames will be finished off with decked platforms and proper roofs in the upcoming months. We owe a thank you to Dave Tersteeg, Director of Parks and Rec, for being so accommodating.

If anyone reading this needs a classy little Norwegian boat house in their life give me a shout! I think one of these would look good in your backyard.