Chrstine Novotny has a new article in Nothern Wilds looking at how nature has influenced her craft, and how she hopes to use her craft to give back to those that protect nature.

Posted on January 13, 2022
by Christine Novotny

When I moved to Grand Marais at the beginning of 2020, I had never lived by so much water before. I came from Minneapolis for a multi-year weaving residency with North House Folk School. In the city, I had grown accustomed to seeing very little sky, and never an unencumbered horizon line. Seeing the stars at night again and the mutable moods of Lake Superior both calmed and invigorated me. The pandemic hit very quickly after I arrived, so my immediate world shrank to my home and my weaving studio, but expanded with the lake and woods at my doorstep. I came into this residency with a whole set of ideas about what I wanted to weave—patterns and colors I was used to working with. However, as I began to work and spend a lot of time outside, my fluid surroundings began to creep into each textile.

“Inspiration” is a concept I’ve never much related to. The idea feels linear, a precursor to the creation: go out, find inspiration, make something new from said inspiration. But that’s not usually how it shows up for me. I see ideas as a relationship, a slow and constant burn. As I work, images, colors and movement come to me, in small glimpses. Through attention and effort, I create new designs and textiles. With time and distance, I am able to see my subconscious at work, and to make connections between my life and the piece. Over the past two years, I have experienced this happening again and again with the big lake down the street.

My first project upon arriving at North House Folk School was a series of towels in Jämtlandsdräl, a graphic patterned weave structure originating in Sweden. I wove with a combination of colors that I had never used before, and after the towels came off the loom, the lakeshore was evident. I had woven a large diamond pattern in a bright burnt orange, the color of the iconic, elegant sunburst lichen that graces the lake’s rocky shores. I wove a shimmering diamond pattern in tinted and dark blues with stripes of beige that reflected the many colors the water takes and the rocks that rest beneath it. 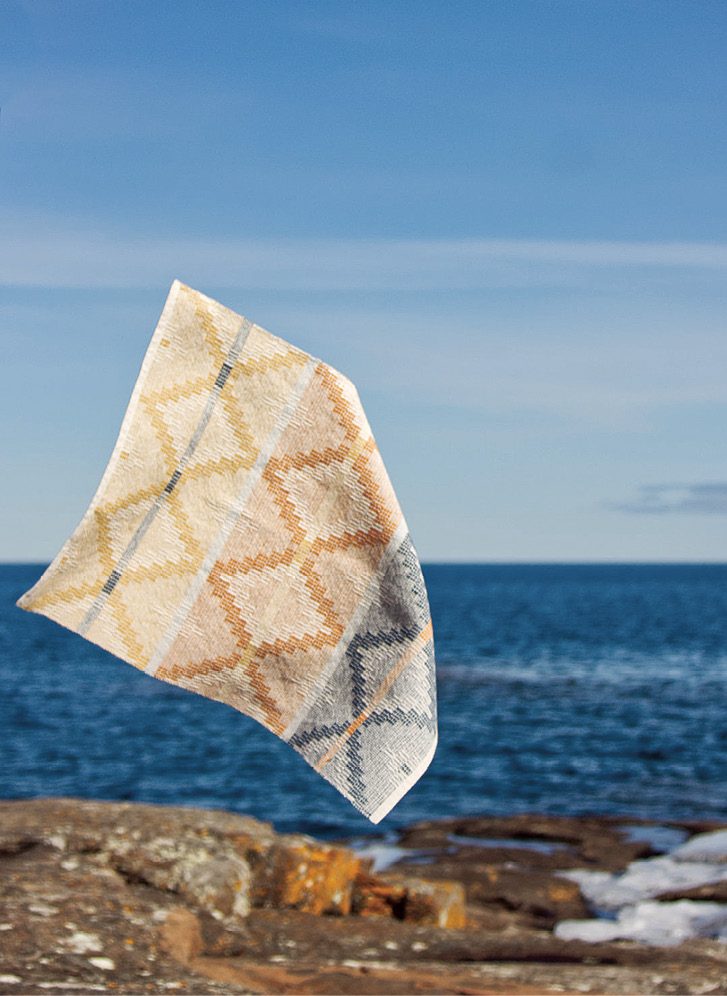 After this towel came off the loom, the lakeshore was evident. The large diamond pattern in bright burnt orange reflects the color of the sunburst lichen that graces the lake’s rocky shores.

In the winter, I released a woolen shawl with a white to blue gradient in the warp and a cascading blue diamond pattern with bright stripes of coral and orange woven throughout. As I sat with the finished work, I remembered the many mornings in fall of 2020 as the pandemic raged, when I went on walks in search of wonder. I always found myself at the beach behind the Whole Foods Co-op, watching the sun rise with streaks of dappled orange clouds floating in the blue mist.

I love mid-century weaver Anni Albers’ “no frills” definition of weaving: “the intricate interlocking of two sets of threads at right angles.” It beautifully encompasses the simplicity of the weaving, while the adjective “intricate” gently nods at the exponential complexities that this interlocking can produce. What I treasure most about weaving is the alchemy of the process, taking a few cones of yarn and guiding their transformation. Laying them next to each other at right angles, overlapping in different proportions, and creating a flexible form with structure and pattern. The ability of right angles to create the appearance of curves and organic forms, using different materials to impact the way light moves on a textile. There is a transformation that occurs from raw materials to a woven textile. In turn, water is the most powerful element on earth, with an extraordinary ability to smooth glass, carve out canyons, and create channels in the sand. Two transformative processes, water and weaving, find relationship with one another.

I am currently working on a series of towels based on the “Water is Life” movement, a fundraiser for legal fees of water protectors defending our most precious resource against oil pipelines. This time, I began with the direct connection to the lake, using lustrous blue linen weft to create the appearance of ripples and waves on a cotton ground. The gray-blue in the linen is a strikingly accurate portrayal of the way the lake looks during fall and winter days. I’m using another variation of Jämtlandsdräl, the first weave structure I used on my lakeshore towels when I moved here. I’m coming full circle almost two years later, from the chance inspiration to a deliberate depiction, as I treasure the ways that this landscape has changed me, and changed the art I create.

Christine Novotny is a weaver in the Artisan Development program at North House Folk School, where traditional craft is taught on the shore of Lake Superior.