Emily Derke explores the harvest of birch bark and interesting uses beyond basketry in her new blog post.

Many people recognize and know the birch tree. I often think about how familiar we are with the different plants around us, as compared to our familiarity with other materials goods, and there seems to be infinite learning possibilities when it comes to knowing about the plants. I’ve been working for years to learn names and characteristics of the plants where I live, and I’ve concluded that it will always be ongoing, new and exciting. Trees, shrubs, ferns, grasses, winter, spring, summer- it’s endless!

Somehow the birch tree has made its way into the ranks of plants that are “generally recognized by many people,” – at least in this area. Maybe it’s because it is so distinctive with its white papery bark, or it’s common use in starting campfires. That’s one thing I notice when I’ve taught basketry classes, particularly with youth- someone always brings up using birch bark to start a campfire. Having that relationship and memory with a plant makes it more recognizable. 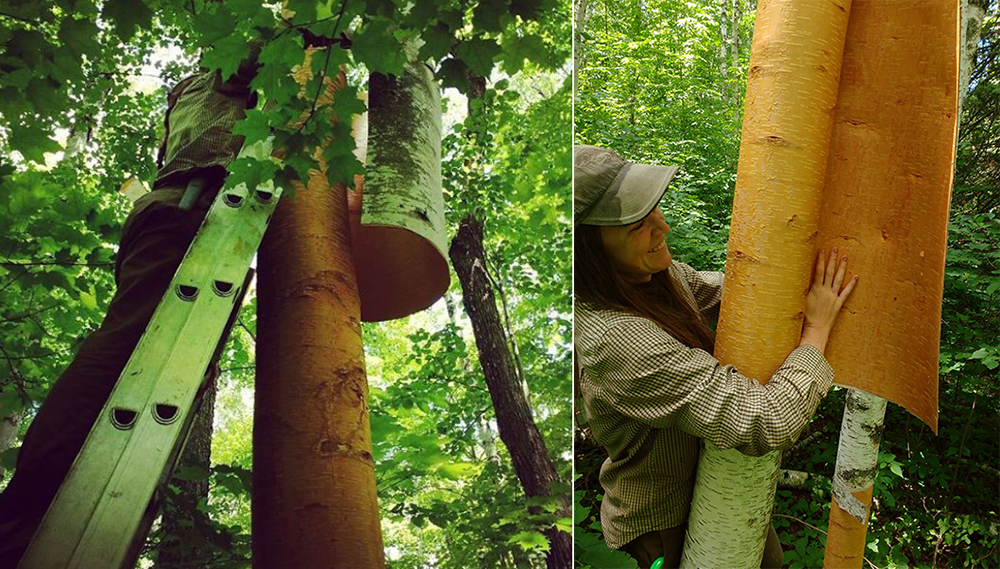 I use a lot of birch bark every year, mostly to teach basketry classes, but also to make things I need and use. The harvest happens for a small part of the summer, and requires planning, permits, or permissions. “Does it kill the tree?!” is a commonly asked question. The answer is “no” but that doesn’t mean there’s nothing to it. The state of the tree plays a role in its ability to recover from the removal of its bark, but the way the bark is harvested also greatly affects how the tree will heal. Birch bark harvesting is certainly best learned under the guidance of a willing teacher. There are a lot of subtleties in selecting the right bark for what is to be made, and how to harvest and store it well. 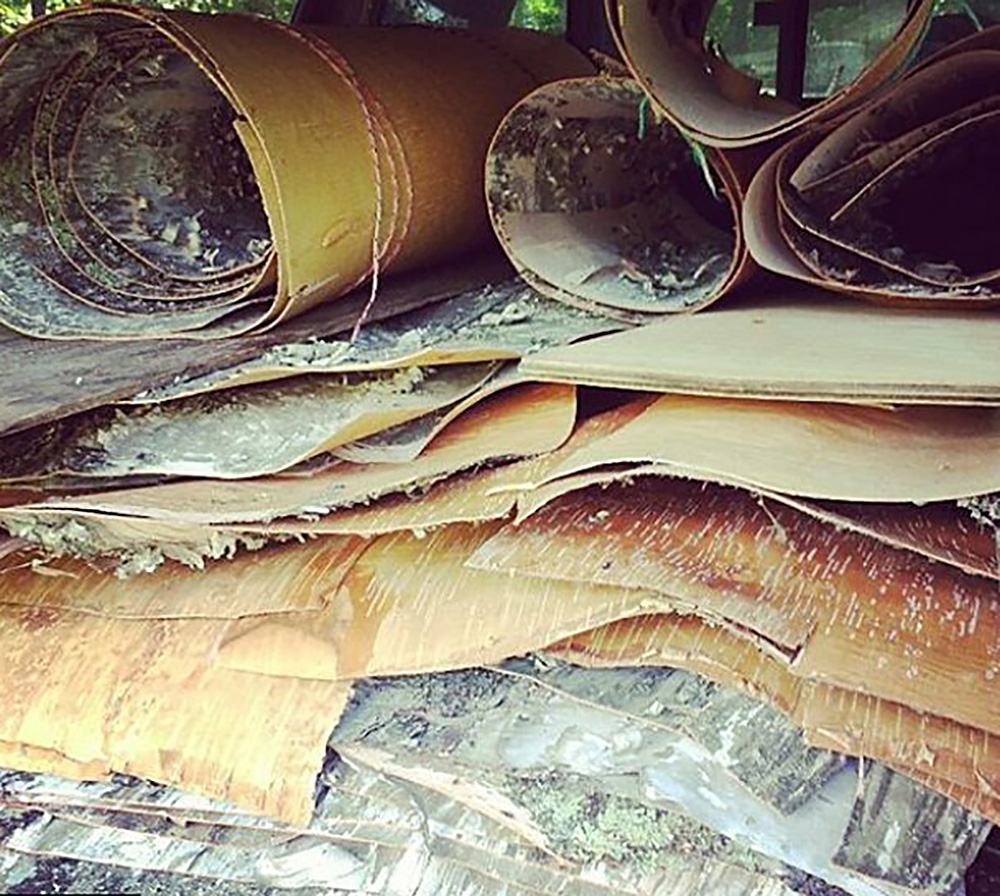 And what can be done with birch bark?! Many, many kinds of baskets, watertight containers, canoes, footwear, net floats, net weights, backpacks, quivers, winnowing trays, moose calls, art, and so much more. There are vast traditions of using birch bark here in Northern Minnesota, other parts of North America, Scandinavia and Russia (and anywhere else with a boreal forest i’m sure. These are just the places i’m familiar with). There are long standing traditions that are still practiced and learned from as people continue working with the materials around them. 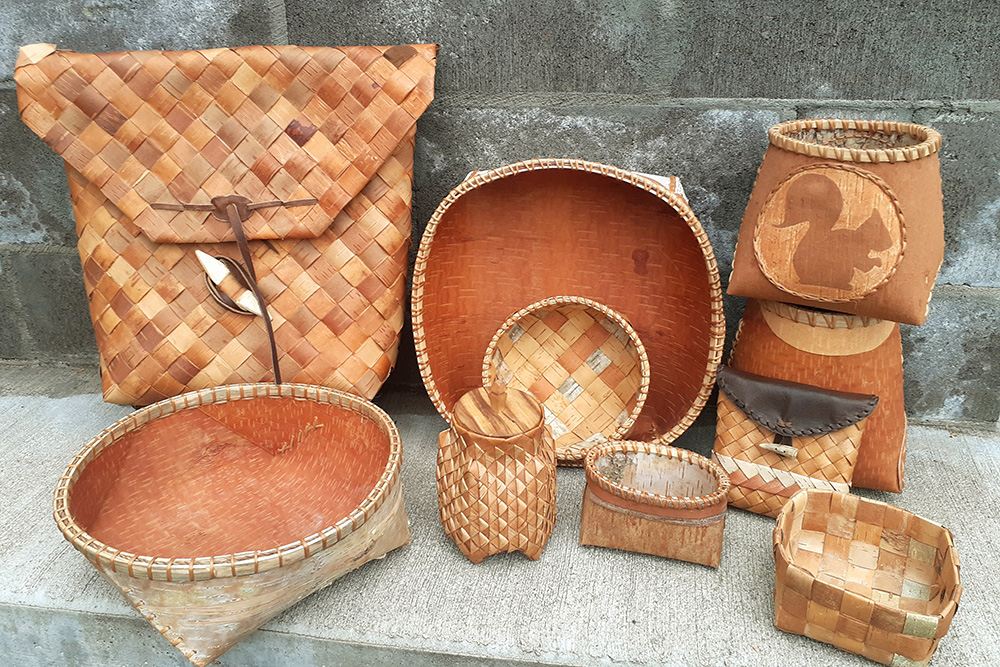 It is quickly turning to early winter here in Grand Marais, and that means the water temperatures on inland lakes have been cooling. That means it is whitefish netting season. I LOVE netting whitefish. It can be cold, wet, icy, and make for frozen fingers but can also bring abundant food and will be sure to provide the most beautiful mornings spent out on the lake.

I’ve heard that 39°F is the ideal water temperature for the whitefish to start spawning in the lakes. That temperature could be variable; I didn’t look it up. I just remember hearing it, so don’t take that as fact, but it sounds about right not me.

Here is how I understand what’s happening:
The whitefish are coming into the shallow areas to spawn. The females wait for the ideal conditions to lay their eggs, and then males come and fertilize those eggs once they have been laid. “ Ideal conditions” means water temperature and substrate.

In Minnesota, the approved lakes for netting whitefish each come with their own set of regulations and specifications from the DNR.

From the MN DNR website: “The DNR bases netting schedules on expected water temperatures, fish abundance and vulnerability of game fish. As the water temperature cools, game fish head to deeper water and whitefish-tullibee come to shallow water for fall spawning. Netting is allowed when there is little chance that game fish populations would be harmed by recreational netting in shallow water.”

What does this have to do with birch bark? 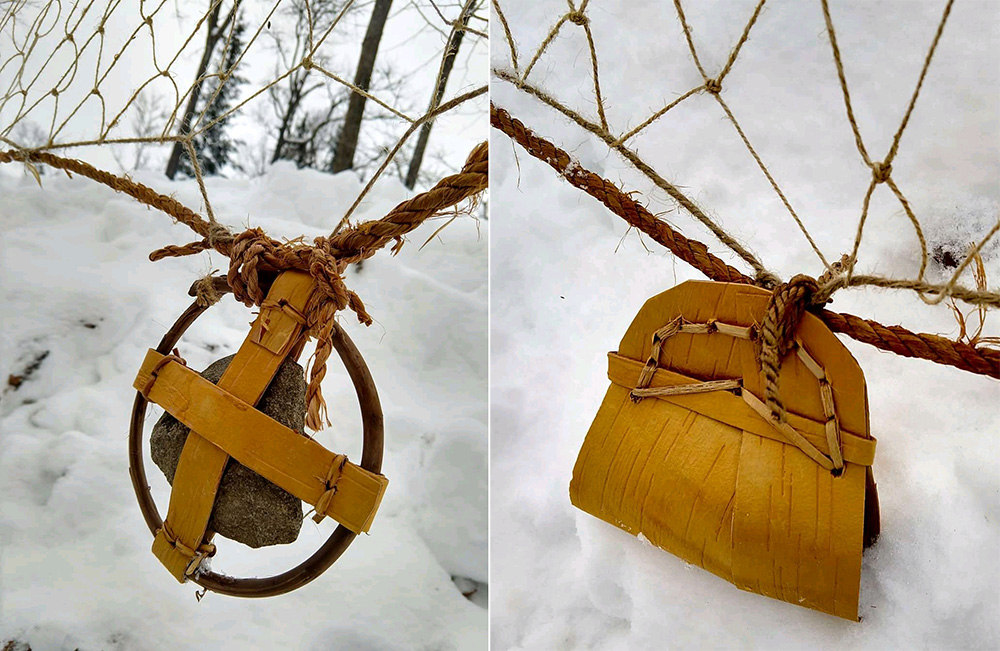 Fish has always been a valuable source of food for people living near water, and the tools needed to harvest the food have greatly changed over time.  Modern monofilament nets are made with a top line that floats, and a lead line on the bottom that sinks.

Pictured above are a few net weights that Nate Johnson made. They are based on old traditional designs for net weights using birch bark. There are two types of weights pictured, the first one is commonly seen on Viking era nets and uses a willow ring, basswood bark stitching, strips of birch bark and a flat stone.  I believe the other is traditionally Finnish. There is a stone wrapped inside of the bark which is stitched together with basswood bark. These weights are tied spaced out along the bottom rope of the net.

The top rope of a net needs to float. Birch bark floats are seen on old nets in the form of tightly curled pieces of bark attached along the length of the net. The bark is buoyant and waterproof, making an excellent float. Carved pieces of cedar have also been widely used.

I have not deeply researched much about old gill nets, but since it is the season of netting, these few traditional uses of birch bark are well worth highlighting and learning more about.It’s pretty amazing when you think about what is around us and how people have met their needs with the materials at hand. At one point in time that was just normal living.

Birch bark is a very special material with such a range of uses.
And what about baskets?!

If you want to know more about how birch bark is used for basket making, come join this North House Webinar:  I’ll be digging into the world of birch bark basketry with how- to demonstrations, discussion of traditions around the world and more info about the plants that are used for basketry here in Northern Minnesota. 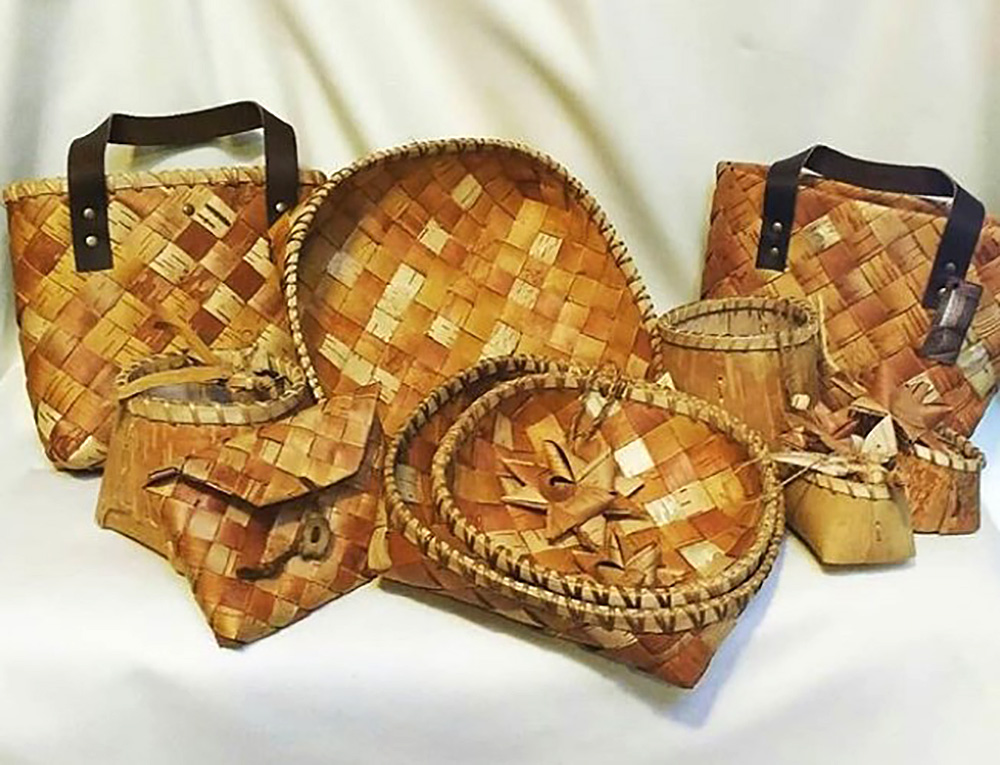