Hello from Sweden!  I’m exactly half way through my time abroad and I’ve already visited many cultural history and folk museums, swerved around sheep napping in the road, taken a course with Per Helldorff at Sätergläntan Institute for Sloyd and Handcraft, visited the farm in Norway that was owned by my great-great-great grandparents, had a crash course in making peeled birch brooms with Ulk Eckardt, hiked Besseggen Ridge (considered by many to be the “most beautiful” hike in Norway), spent a weekend at Täljfest taking workshops from David Fisher, Beth Moen and Helena Åberg, and have over 2,000 photos of objects, places and experiences that I’ve found inspirational.

One of the subjects that has been unexpectedly exciting for me here is the many ways I’ve encountered the intersection of traditional woodworking and broom-making in Norway and Sweden.  Coming into the Artisan Development Program, I was mostly making my living as a broom-maker, however I wanted to focus on wood carving and woodturning during my two years in the program.  I’ve continued making brooms throughout this time, though, and really enjoy finding ways to incorporate various carving methods and woodworking techniques into broom-making.

Many of the brooms that caught my attention upon arriving are not something that many of us would even consider brooms – they were just a bundle of thin birch branches tied together with another branch that had been twisted to loosen the fibers and make it more pliable.  Sometimes these brooms are just bundles of branches a few feet long so one can hold the top of the bundle and barely stoop to sweep the ground with the ends of the branches, but I’ve also seen a few occasions where these bundles have been fastened to a larger stick or dowel to create something a bit closer to what I generally picture when I think of a broom.  Brooms made completely from wood!

I was trying to explain the main style of floor broom that I make to one of my fellow students at Sätergläntan a couple weeks ago.  It took a bit of time, but finally her eyes lit up and she continued on to tell me a story about how, growing up in Sweden, she had never seen a broom that consisted of broomcorn (or another similar fiber) simply tied onto a handle.  All of the brooms in her life were more similar to a push broom with the sweeping fibers attached to a horizontal block of wood that was then fastened on the end of a dowel. It wasn’t until she was a teenager when her mother brought back a broom after a trip to the US, that she saw anything resembling what I make.  Through our continued conversation about brooms in Sweden, I came to be aware of a company here called Iris Hantverk. This company, in various forms, has been around and making brooms since 1870, and for this entire history, the workforce has consisted of people who are visually impaired. The company is based in Stockholm, so I had the opportunity to visit one of their stores.

Nothing was made using broomcorn, but they have a myriad of other fibers that are used, including something referred to as “cereal root,” or “rice root.” My brain quickly jumped to the idea of trying to use wild rice root to make a similar product, but I am fully aware that pulling up a wild rice plant is illegal in Minnesota, so that won’t be happening! I also later found out that it is not actually the root of rice plants, but the root of a grass referred to as “zatacon,” though I cannot find any further information on the Latin name of this so called grass and it’s driving the agrostologist part of me crazy!  But in light of this information, the wild rice roots probably wouldn’t have worked anyway. I’m not struck by the machined aesthetics of the wood used in Iris Hantverk brooms, however this method of broom making is completely new to me and I’m hoping to take inspiration from their methods and materials and explore some similar hand-carved versions. A selection of photos from their shop and website are below, and you can also check out the English version of their website, which is very thorough and interesting, at: https://www.irishantverk.se/en.  Oh, and they even had broom inspired lighting in their store – the picture is below! 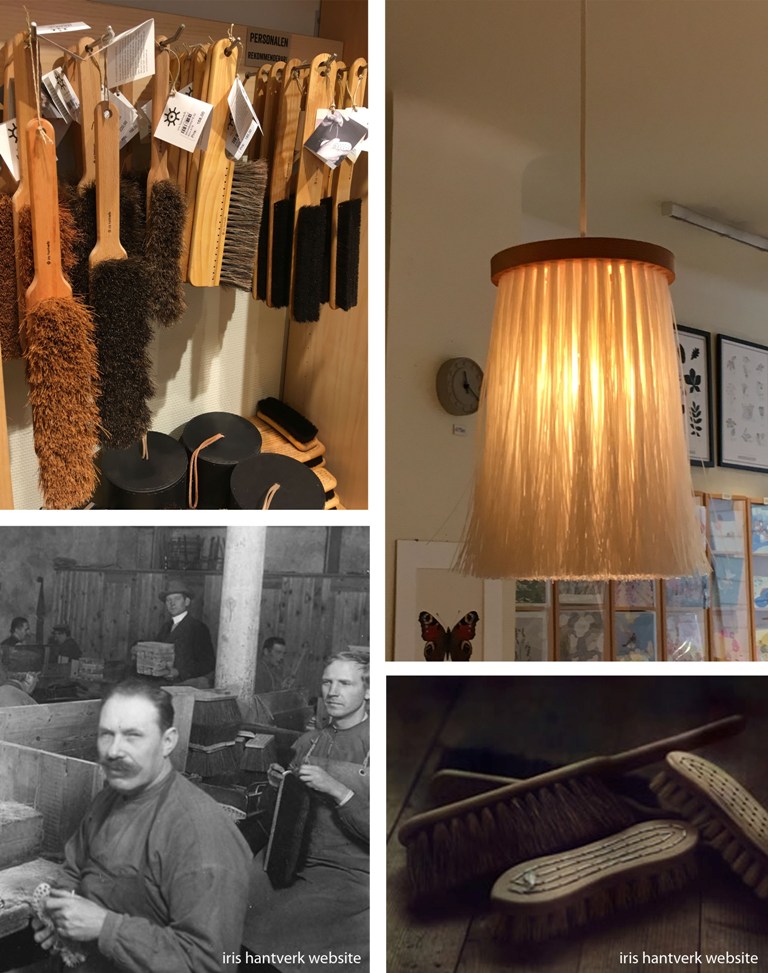 On my last day of class at Sätergläntan, I approached my instructor, Per Helldorff, about getting into the library.  I had heard what bordered on legends about the books and items in that building and on more than one occasion during the week, had stopped by to peer into the windows and marvel from afar.  My classmates were much more interested in their projects than in the library, so Per and I headed over after lunch. He had told me about a broom that used to be in the library that had been made by Wille Sundqvist, but said he hadn’t seen it in many years and thought it might be gone.  I remembered when Jögge Sundqvist was teaching at North House last year he mentioned to me his father having made some brooms, but didn’t say much more and I had wrongfully assumed they were the peeled birch brooms. After a few minutes rustling around in a back room, Per emerged with a truly amazing creation.  Measuring just below waist height, this broom had a shape vaguely resembling a hockey-stick (but oh so much more elegantly curved), with horsehair fibers sewn along the “blade.” The handle was chip carved in a style very similar to the spoons that I’ve seen of Wille’s, and of course, it felt magical to use and worked like a charm.  I spent quite a bit if time poking around the library, marveling at all of the amazing books and handcraft, and it was so hard to pry myself away from that broom, especially knowing that my time studying it was very likely a once-in-a-lifetime opportunity. I told Per that I wanted to trace it on a huge sheet of paper so I could capture the elegant curves, but his response was “Oh, it’s not so hard.  Just go find a tree that has the right shape – but not here, the students have cut down all the good trees.” I did take a lot of photos, and now my eye will be looking for something a little different on my treks in the forest looking for broom handles. 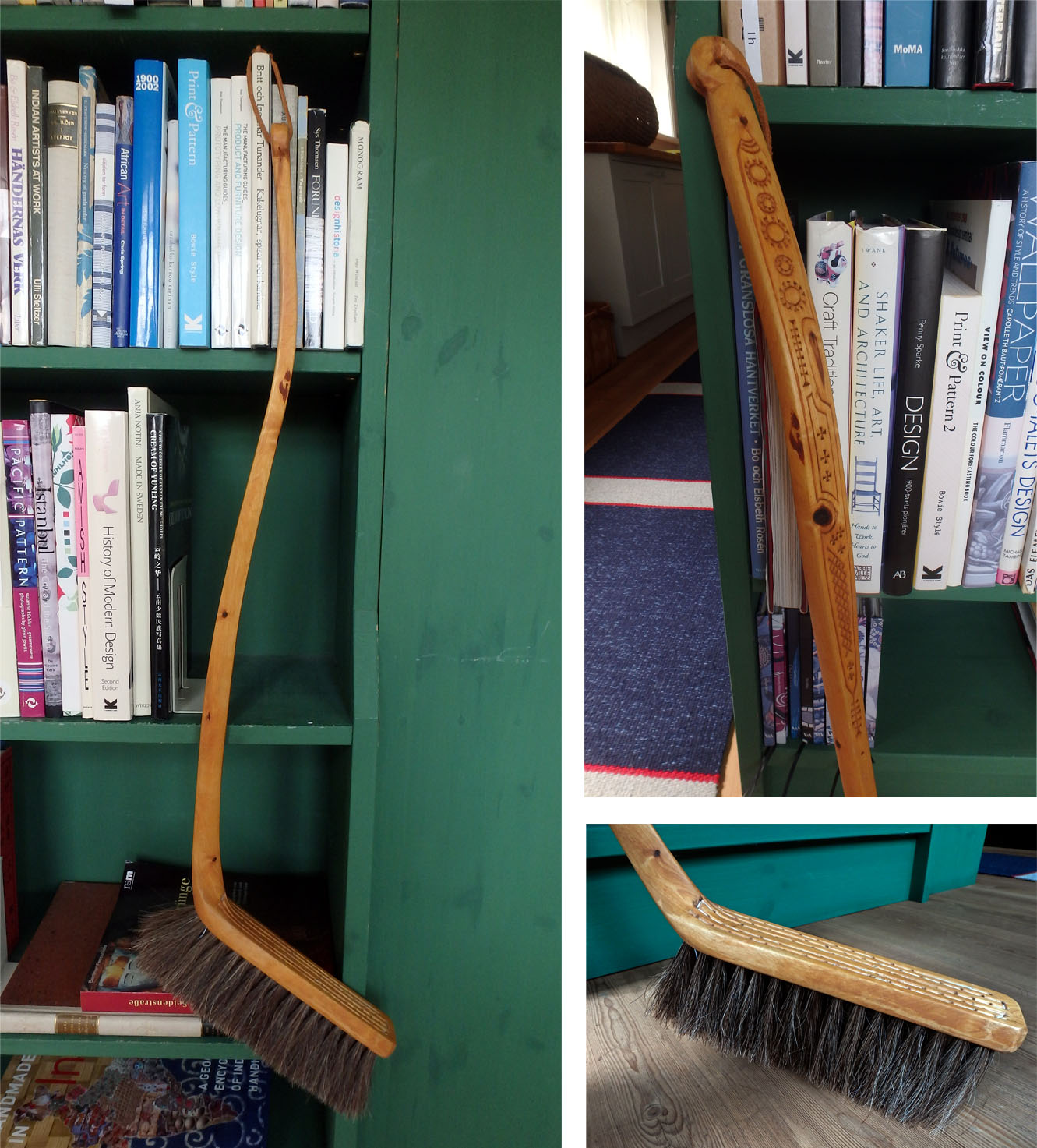 Oh, and as a final note, check out this other amazing broom I came across hanging on the wall in the Sätergläntan library.  I don’t know the story, but it left me speechless! And since my sweetheart is a baker, a broom made from cereal grain would be completely appropriate in our lives. 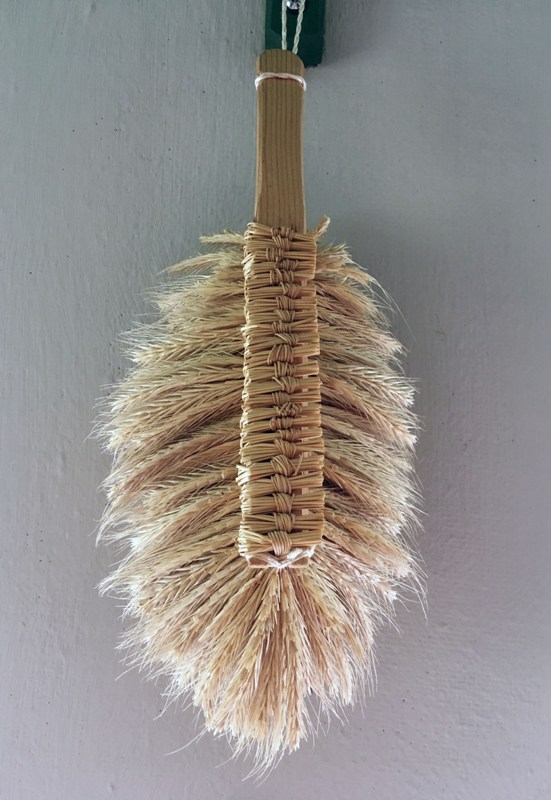 And if you want to continue to see more treasures and stories from my travels in Sweden and Norway, be sure to follow me on Instagram @marybethgarmoe.