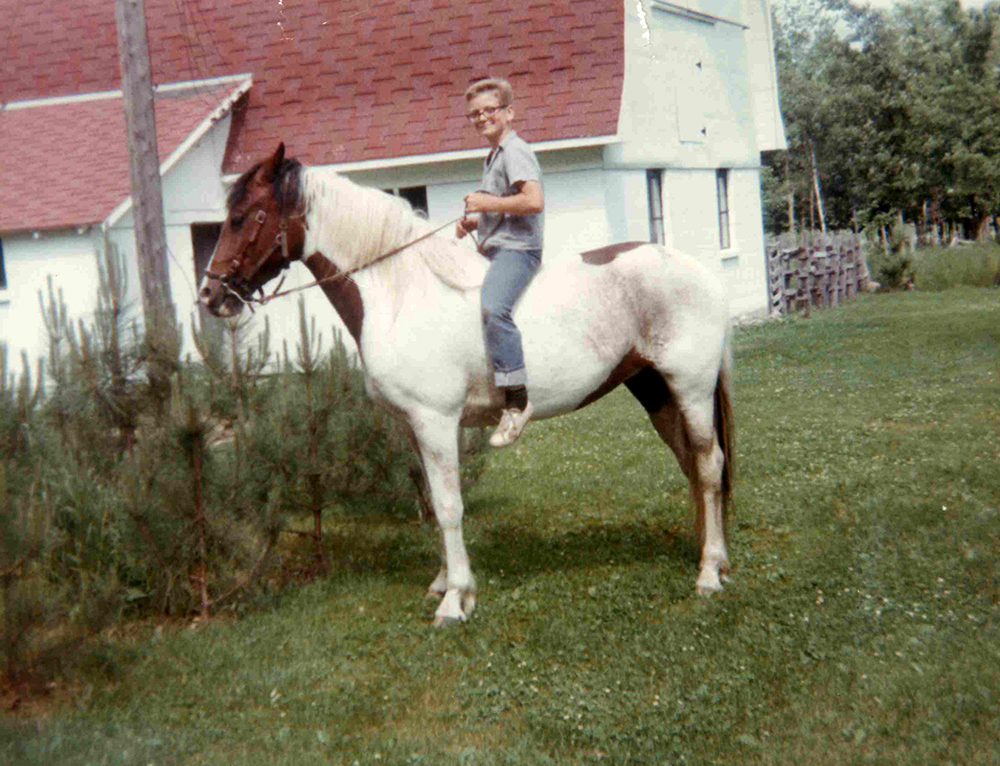 Mark Hansen and his pony

I first met Mark Hansen on the cusp of covid, before phrases like social distancing and shelter-at-home became a part of everyone’s lexicon.  Mark was setting up for his Design Your Own Small House class and the interns were finishing up our Black Ash Pack Basket class with Ian Andrus. Mark is a man whose reputation precedes him. I’d heard stories of THE Mark Hansen the boat-builder, the founder, the man who was a part of starting it all. And meeting Mark Hasen was presented as an inevitable part of the North House internship experience.

Maybe it's my name, maybe it's my mumble, but introducing myself usually prompts a follow up question—Leah, is it? Or did you say Mia? But when I met Mark the follow-up question was one of curiosity, not confirmation—What does your name mean? Nia (pronounced like nee-AH) means purpose in Swahili. It’s also the 5th day of Kwanzaa, a day which encourages us to connect the history of our community with the future, it’s all about communal identity and communal purpose. My name has this beautiful meaning that I don’t normally share because people don’t normally ask, but Mark Hansen did. As I went on to chat with Mark later that day and then for this interview it became clear to me that Mark is a man who is interested in those details. He wants to know what your name means and where your people come from. He knows every person has a story and he wants to hear yours.

I had this set of questions for Mark on life and boats on tiny houses and the beginnings of the North House but we spent most the hour sharing stories which ultimately touched on all of the above.

Throughout our conversation we kept circling back to his life as a kid. He describes his early years as the ideal childhood—a healthy mix of adventure, and nature, and creating, and dreaming. His father was a minster, as was his grandfather. For a period of time they lived in a parsonage, the house provided by the church for the minster and his family. He relates his appreciation for small spaces to the time he spent there, “ I slept under the stairway going down into the basement. It was just big enough for me to have a little sleeping pad. I always felt more comfortable when I was in a little cave-like structure.”

As we spoke Mark grounded me in his current surroundings.  He was calling from the Dan Van, a cargo van he’d equipped to accommodate his son Dan Hansen. Dan is a poet and artist who lives with a neuromuscular disease. These days the Dan Van serves as a rolling office and sometimes studio for Mark himself. As we talked, Mark described the sunlight warming him and the baltic birch plywood that finishes the interior. The Dan Van is just one of many small and mobile living structures Mark has built over the years.

In a world in which bigger often means better and more means more, it’s inspiring to hear someone like Mark counter these misconceptions especially since he’s spent years living in and building these structures. “I like living small and I like living in a way that I'm paying as I go. I am not too keen on monthly payments and paying interest. When I could afford something, I bought it.  Until then I operated on Plan B.  But it's mostly just about trying to live a life that isn't too consumptive.” 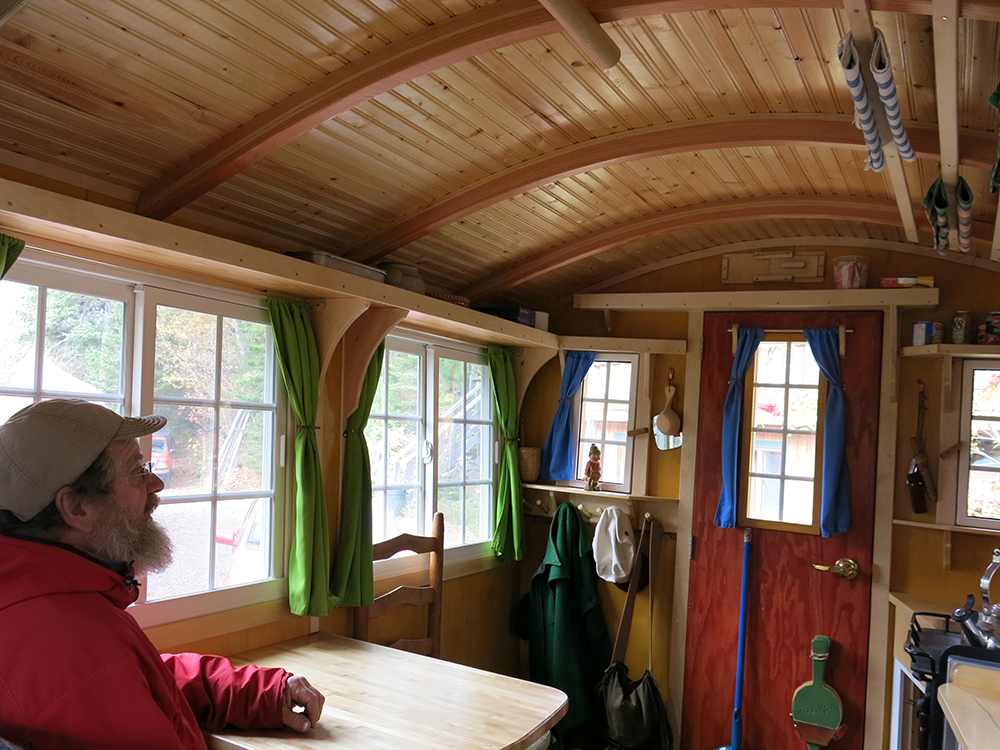 Mark in a tiny home he built—The Gypsy Wagon

He went on to describe his architecture as a little on the shacky side, and to him this is something to be proud of. Mark likes to build things that are nothing more than they need to be, “It's closer to the earth. It's more welcoming, and there's more life to it if it's personal.” Mark likes the personal. Still drawing inspiration from his earliest years, he sees his inner child in the things he makes, “I am still reliving my childhood. I mean, we still have the child in us. I really think that what I do now is sort of an extension of how I was thinking and how I wanted to arrange my life when I was a kid. I always had projects, I still do and they just keep getting more and more interesting all the time.” Mark’s current project is a 100 lb electrified trike, an all seasons vehicle good for exercise and errands.  The trike will have a range of approximately 80 miles with pedal assistance. 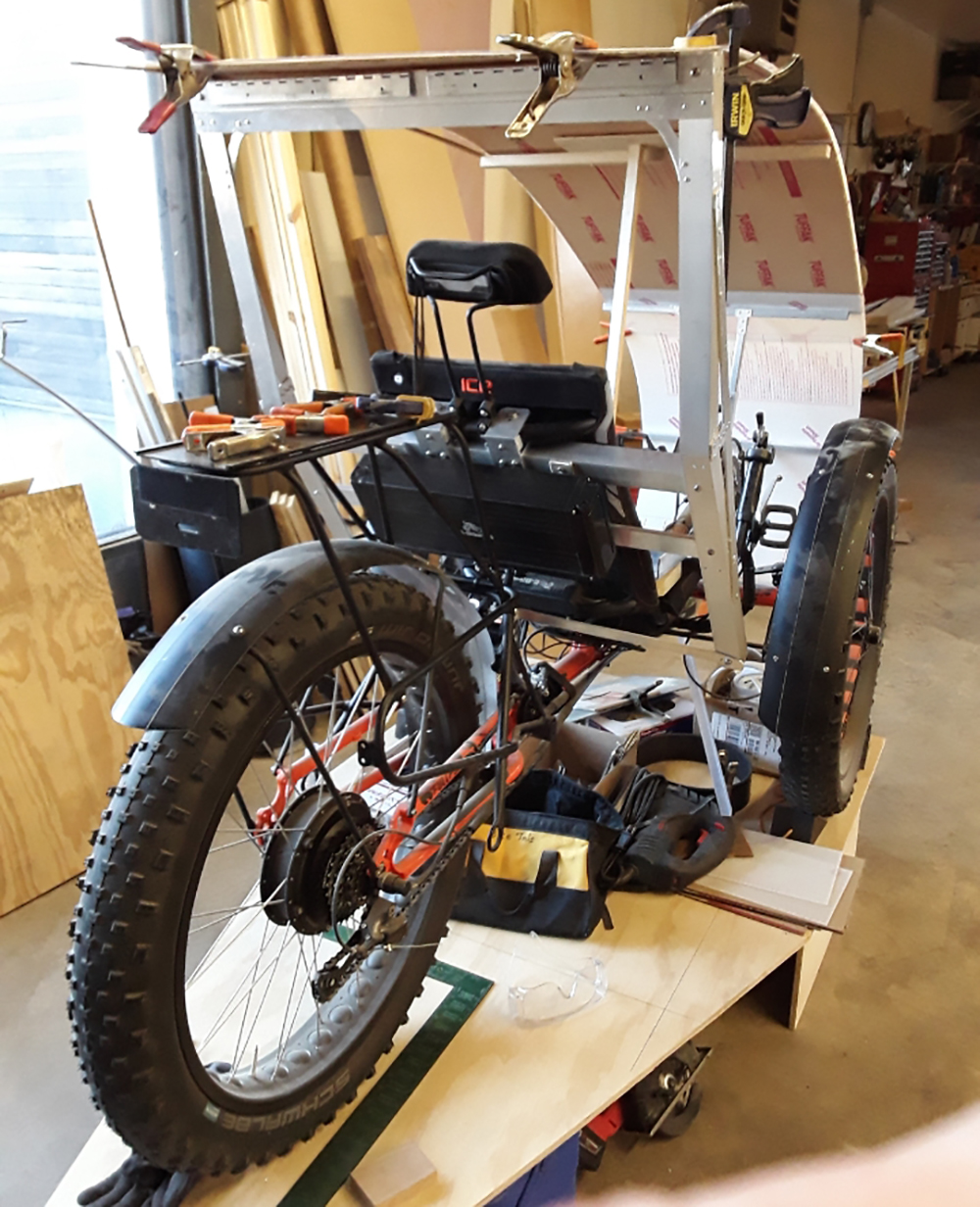 As a kid Mark spent some years on a farm in Minnesota. He points to that time and pet he acquired in elementary school as a big influence in his life, “I got a nice little saddle pony from the neighbor. I swapped him a sleeping bag for this little saddle pony that he won at the auction house over in Mora. I think I rode that thing for 12 years.” Mark eventually had the pony bred and a stallion was born, so he kind of got a pony and a stallion out of that trade. Riding bareback taught Mark how to be a good rider. It made his legs strong. He’d spend days riding, going cross-country, and up rivers until it got so deep that he’d be wading through pools of water with his horse.

For Mark these adventures were his sanctuary, “School was very very oppressive to me. It was really like jail. I really couldn’t stand school because I just couldn’t pay attention.” For Mark that meant Ds and Fs and stern remarks from his teachers—Oh Mark is daydreaming again.  And he probably was.

Early on Mark figured out that he could be building things even when he was in school. He’d craft in his head. It was a way to transcend his school desk. Whether in his head or with his hands he was always making something, “I was always hoping that I would get called on for show-and-tell, but that ended after the fifth grade. I always had a project ready, and my arm raised, whether it was a model of something, or a really good story that I had heard. And the students liked what I brought up. They were interested and they all sat quietly and listened” 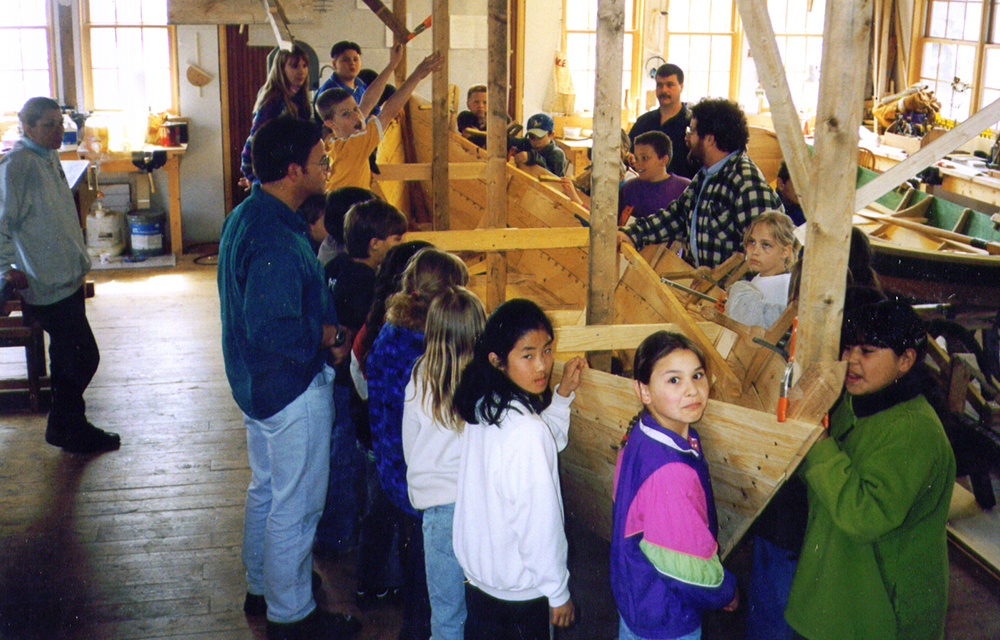 It’s worth mentioning that Mark eventually found his stride in school. He graduated high school and went to college and even went to graduate school and got a degree in psychology. But I think many of us can relate to the discomfort that he describes as part of his early school experience. I asked Mark how those early experiences affected his teaching philosophy and his initial motivations for North House, “ I think it has a profound impact on how I teach now. I really like the idea of no competition. And I was very, very excited about North house becoming a non-competitive school.  A school  for the people rather than people for the school. I think it's really important to be kind to people and help people feel at home in that learning environment and to be welcoming. These sorts of things were in short supply when I was a youngster in the educational system here in Minnesota. I don't want people to feel the way I felt in the learning process. I mean, the learning process should be really inviting and exciting and an exercise in generosity.” 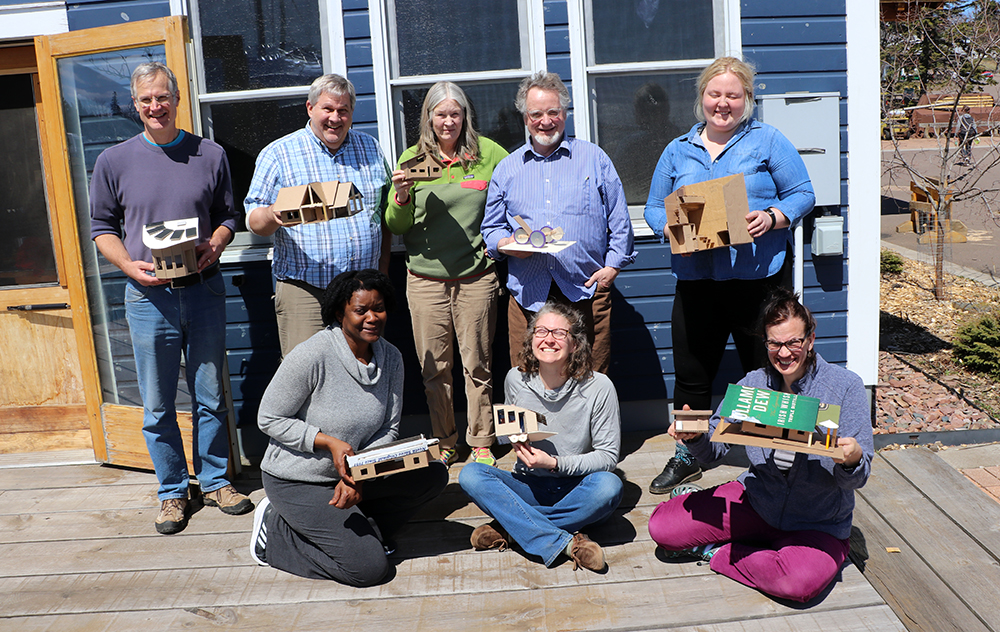 Mark and his Design Your House Small House students

In reading North House’s mission statement you can still hear echoes of Mark Hansen. The man who has always wanted to make and share in making⁠—Our mission is to enrich lives and build community by teaching traditional northern crafts in a student-centered learning environment that inspires the hands, the heart and the mind.