Things have changed a bit around North House Folk School without the stir of staff, students and classes. The present feels strange and the future uncertain. During these quiet days, it seems important to reflect on the past. This place carries countless stories rooted in craft. I am surrounded by clues in the handmade objects and tools that occupy our space. I flip something over and find a name scrawled of someone who learned here, taught here, or lived here like myself. What a good time to make sense of this space through following the clues, collecting stories, and continuing conversations.

Since arriving at the folk school, I’ve developed a fascination with baskets. I met North House instructor, April Stone, when she was last here teaching a lidded black ash basket class. In the whirlwind of classes and community events -- our meeting was brief, and I was left with questions and curiosities about her path as a craftsperson.

Last Thursday morning we spoke over the phone. I asked questions, and April generously shared her thoughts on craft and stories from her journey as a basketmaker and teacher.

April’s journey in basketry started at North House in the early days of the folk school. April and her former partner, Jarrod, were both attending classes when North House had recently acquired the Forest Service buildings. April went home content with a pair of felted booties she had made, and Jarrod left with a black ash basket he wove under Peter Henrikson’s instruction.

Every day for a year, April helped Jarrod pack his basket with lunch and coffee for work. In the evenings she unloaded the basket to wash the dishes. Over the course of this year, April watched the basket weather the daily abuse of use -- rain, dirty hands, dog hair, and lunch loads. It changed color and relaxed a bit. She considers interacting with and observing Jarrod’s basket for a year without trying to replicate it an important part of her teaching.

"I had gained some kind of intimate relationship with that [basket] whether I was aware of it or not. I think about how babies are in cradleboards for the first year of their life. They're there to watch and to listen and to smell and to use their senses without actually physically touching anything. They're there to take it all in in other ways."

Only after a full year did a piece of the lashing on the rim break. It was in that moment that April realized the strength of black ash as a material and her own desire to make a basket. In the spring of 1999, April wove her first basket. She spent the next year seeking out teachers and ultimately learning about basketry by weaving basket after basket on her own.

"There was a lot of critical thinking involved in that year. I looked at books. I went to the library, and I tried to find videos of anybody making baskets. I looked at pictures. What I was trying to do was replicate what I was seeing in these pictures, and in the process I was learning about tension, shape, design, proportions and ratios."

When asked what parts of the basket-making process she finds most satisfying, April’s answers were all related to teaching and watching the process be empowering and healing for others. As a craftsperson, April focuses most of her energy on teaching. She is currently teaching her second semester of Native American Arts and Culture at Northland College in Ashland, Wisconsin. Despite having access to a variety of traditional crafts, all of her students chose to make baskets over the course of the class. Since COVID complications have sent students home, April has shifted to teaching the class online.

Over the past twenty years, April has taught basketry to kids and adults from all walks of life. From plaiting cooking baskets with kids camps to teaching extended classes that include harvesting and processing material for baskets, April enjoys bearing witness to how students react to the work and feel empowered in the process. In her work with at-risk youth, April has noticed how an opportunity to work with one's hands in a positive space often leads students to speaking about their struggles and talking about how they came to where they are. In this way, the work can be healing.

April also finds joy when encountering forgotten baskets. Occasionally, she would make a basket and feel unsatisfied with the way it came together and maybe even find it ugly. Then years later she would stumble upon the same basket, thinking it beautiful and would ask the owner where it came from.

"I forgot that I made it. It's worn out and it's kind of broken, and I'm like oh my god it is such a beautiful basket and so that kind of gives me pleasure --  seeing it later on and [knowing] it's been used."

I asked April to share what she felt were the most poignant lessons learned while making baskets over the past twenty years.

"The tree is teaching me. I don't use an increment borer. I try to read the signs of the tree when I'm out there in the forest. I try to look at the crown and try to tap into what I think that tree looks like on the inside -- if it's healthy or not. It's that ecological knowledge that I'm trying to decipher."

"What is striking for me is what the material has to teach me and what it teaches others. I notice how people interact with the material during a class. Some people are just blown away by it, some people are super frustrated by it and by the process, and so I just sit, watch, and I just try to understand more about the situation of that person or of our energy in our space when we're working together. It is teaching us about frustration. It's teaching us about humility and respect." 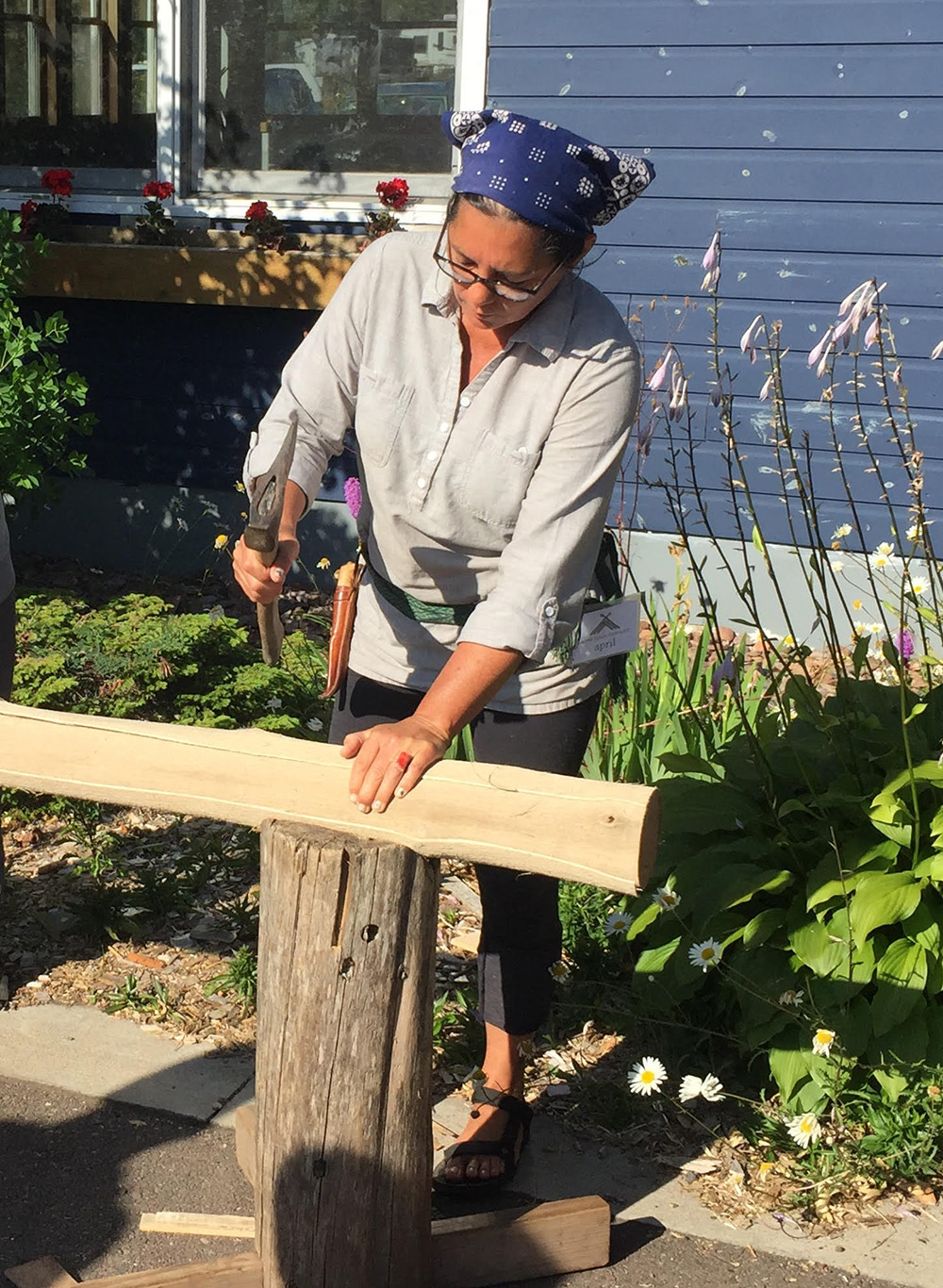 April is always curious to see whether her students are receptive to the teachings and open to learning about themselves in the process.

She told me about working on her own capacity to be aware of the greater lessons at play when it comes to witnessing the destruction wreaked by the emerald ash borer.

The emerald ash borer is an invasive insect that burrows in the bark of the ash and disrupts the flow of nutrients. It is currently killing millions of ash trees across northern forests and is heavily impacting communities of basket makers. Rather than feeling angry and attempting to fight the EAB by introducing more unknowns to the ecosystem through human interference, April suggests that the borer brings a lesson that we need to take heed.

"I'm curious as to what the effects are going to be of humans trying to help this species. It’s great, but what if we're actually messing it up because now we're going to plant seeds with an old imprint versus the young ones that may have altered something genetically to be more resistant and survive. Maybe we need to let the old ash go. This means my basketry I can't make with these trees for a while, but that's okay because I'll still carry that knowledge. Maybe we're supposed to move on to other trees. Maybe the willow wants to be woven more. Maybe the hazel wants to be woven more. Maybe these other species that are growing wild want to be woven more, but we're not recognizing that. We're just sticking to this black ash for some reason. That's when I say maybe the borer is trying to teach us a lesson. What is that lesson? I'm just trying to try to pay attention to everything the best I can."

April funneled her original anger about the EAB into a project she calls her “Burial Basket.” In 2015, April received a Regional Artist Fellowship from the Native Arts and Culture Foundation to weave this monumental basket. In 2017, she received funding from the Historical Society to build the project in the public while engaging the community of Ashland, Wisconsin.

"It was an homage to the death of ash, but at the time that I was making it, it was also an homage to myself and the death of a previous existence that I thought was never going to change which was my marriage. It was very personal. Here I am building this burial basket that is supposed to be an artistic statement, but it's actually turning out that I'm building it for myself -- the dimensions and everything -- it was laid out for me."

"I only got the bottom finished within that month and then I had to move it out of the studio. I moved to town for about a year. I moved it into the back room, and I left it there for the year because it was still very much part of the grief process. I realize that basket was myself and I was that basket. That basket took on a female energy. I kept crawling in it. It was helping to transform me and my own healing at that time."

Then I finally moved back out to the reservation and moved back into my old house. I took it out and I threw it in the lake. I took it all apart and I re-wove it with the same energy of all the people [who helped to weave it] -- just a little tighter because it was too big and finished the lid and finally delivered it.

April handed the burial basket over to the Minnesota Historical Society. It is currently on display in the cities.

April does not consider herself a fancy basket maker. She feels more compelled to make utilitarian baskets built to endure their intended use and teach others to do the same. Ultimately, our conversation and the stories she shared shed light on the ways that the utility of craft expands beyond its use in the physical world. Somewhere entangled in the process of learning from a material, making a vessel, and putting it to use -- craft helps us to carry physical loads -- like lunches and tools as well as emotional loads -- like joy, trauma, and grief. 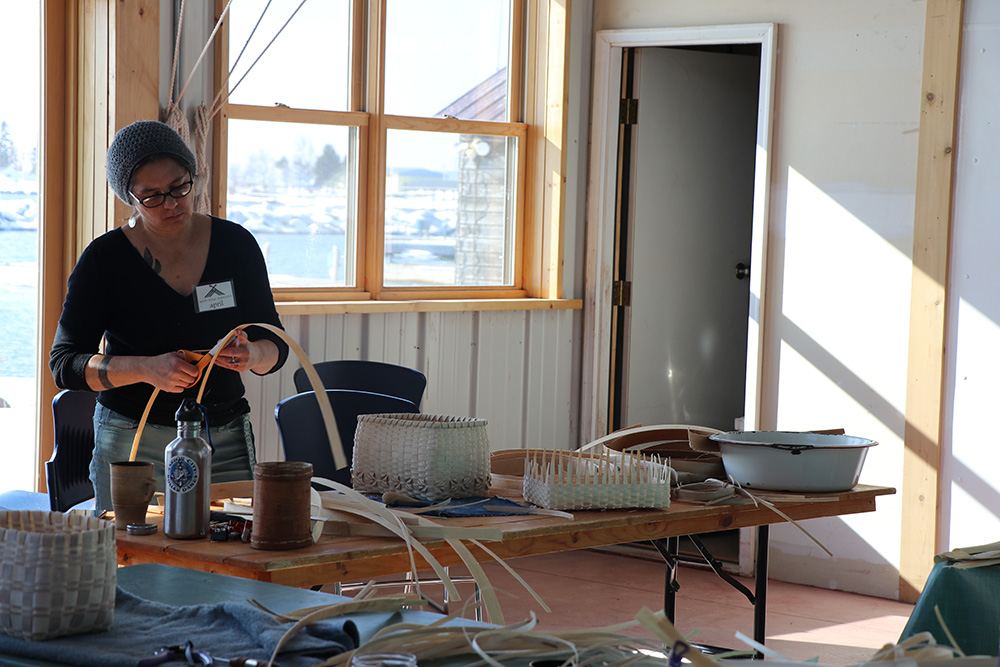