Hello North House Followers!
I’m Josh Tolkan, one of the new Resident Artisans here at North House bringing you my first blog post! Elise (the other new ADP participant) and I have had a busy first three weeks, getting orientated and settling into our new studio space.

North House has a pretty amazing orientation process. Elise and I got to spend time with each and every person on staff, getting to know them and and what they do for North House. In between those meetings we got settled into our space in the studio above the Betsy Bowen Gallery. We are in the sanctuary of an old church, which makes for an interesting space. We have great light from gorgeous window but a terribly wonky floor.

I was lucky to have several great friends help me move all of my things up to Grand Marais from the Twin Cities. I have accumulated several large power tools over the years that I took up here with me, as well as a large collection of wood. I have a real problem with hoarding wood, but that is a topic for another day. My first goal in the studio was to build some outdoor lumber racks to store as much of the wood as I could. The studio already has a little outdoor storage shed with an overhanging roof, so I just anchored some wooden brackets into that for my shelves. A lot of what is sitting out there now is some remnants of Black Locust tree I cut down about a year ago. Locust is an amazing wood. It is hard and stable and rot resistant, all qualities a good boat builder looks for in structural parts of a boat. I had cut down this locust tree hoping to make some gunwales out of it. However I didn’t do a great job milling it up and it is of somewhat marginal use. But I am too stubborn to throw it away and I have a plan to salvage it. I also have some Alaskan Yellow Cedar (Pacific Cypress), Curly Maple, Madrone, Black Walnut and some chucks on reclaimed Doug Fir out there.

Oh yeah, I forgot to mention I am a boat builder. I attended the Northwest School of Wooden Boat Building in 2006-2017, following several years of hobby boatbuilding. After that I spent a year working for Wilderness Inquiry in Minneapolis where I designed and prototyped a new Voyaguer canoe design for them (pictured below). 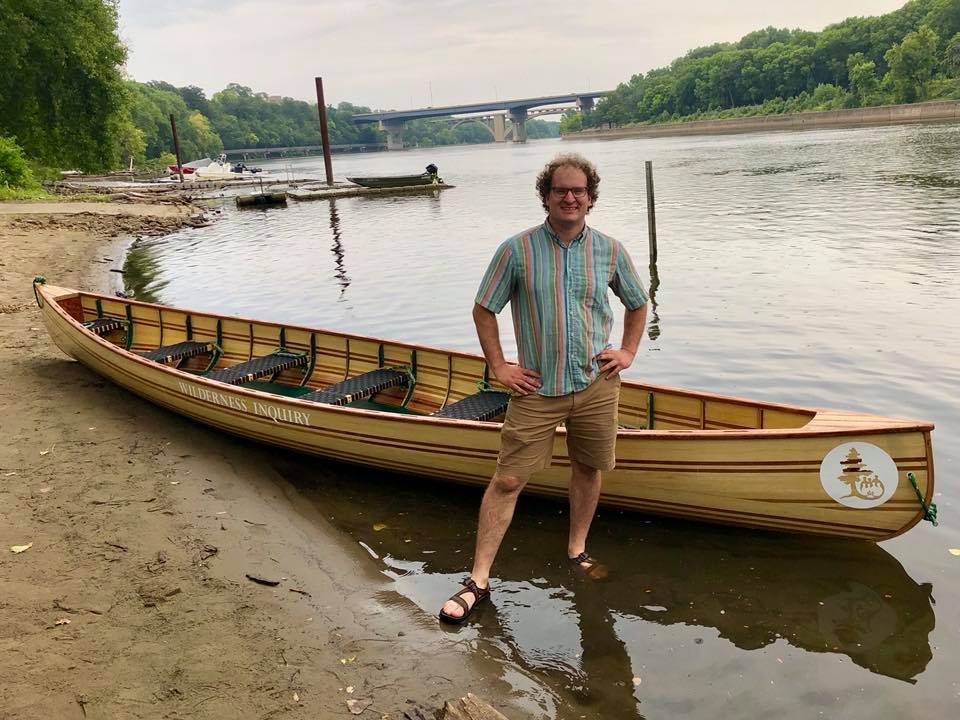 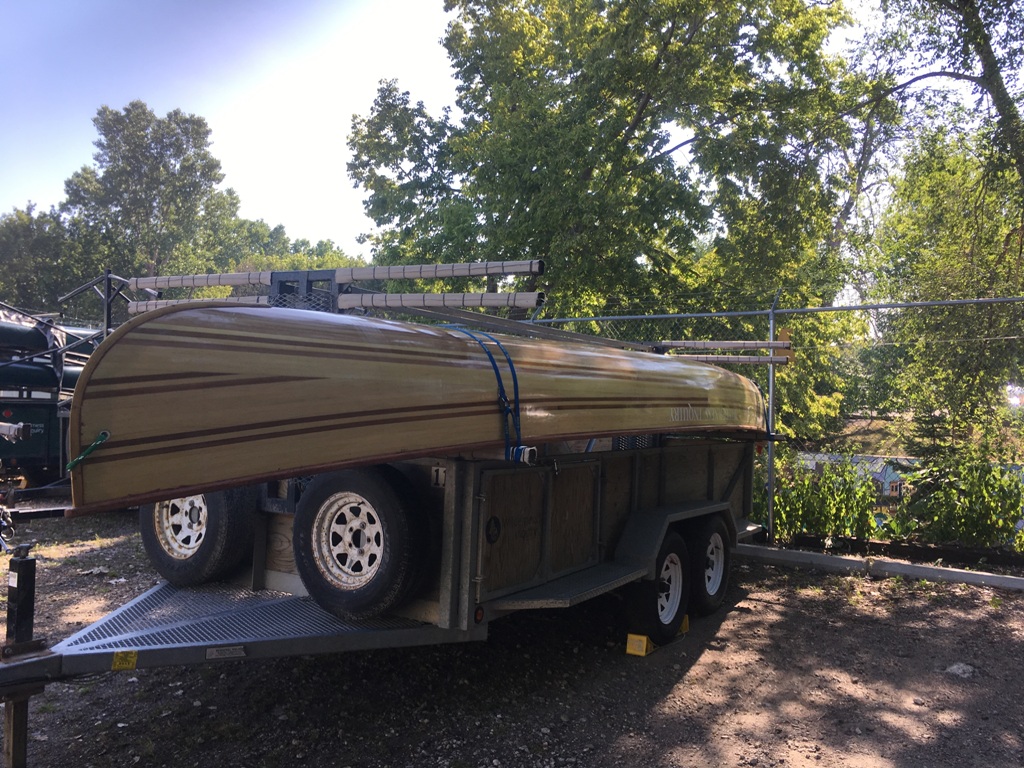 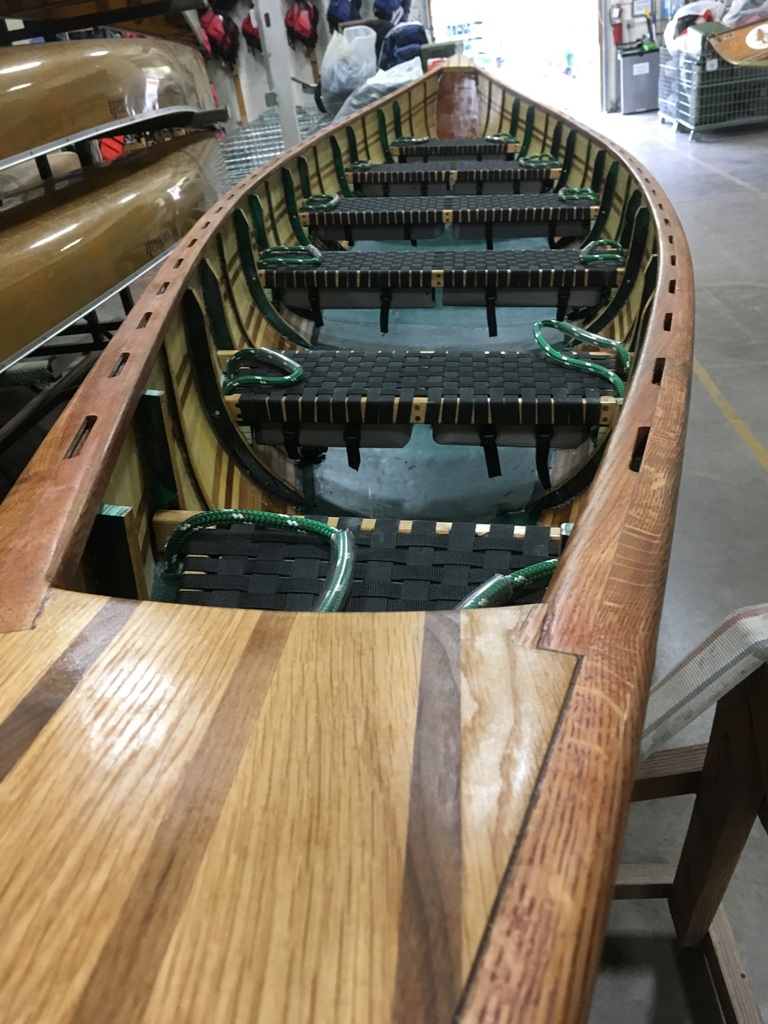 Then I helped build a plug so that Wilderness Inquiry can start having the new Voyaguer canoes mass produced in composites at Wenonah Canoe Company. Prior to boatbuilding school I had worked for seven years as an affordable housing developer for Project for Pride in Living. I think years of looking at the structural and finishing details of old houses kept stoking my internal fire to build things. I’ve been paddling the northern waterways since I was a boy and teaching sailing since highschool. So naturally, those things I wanted to build were boats. Here I am.

Once I had some of that wood out of the way Elise and I were able to build a wall between our two spots in the studio. That actually went pretty quick and helped me figure out how to organize all of my tools better. I’ve spent the past week building various shop things. I reinforced and recovered a table Angela had been using. It is now very flat and I will use it for gluing stuff up on. I also built a little mess station for glue and epoxy. I wanted to mount a vise onto the workbench I’ll be using and luckily North House had recently removed a section of workbench from the red building and had a space vise left over from that. Plus, I built a few shelves and hooks to store many different things on the walls.

Just now I’m finally starting to feel settled here in Grand Marais and ready to start making things. I think I will get my feet wet making a few simple things. Possibly some mallets, paddles, wooden hand planes, and hull half models.

I’ve got big plans for boats to build over the next two years too though. I already have started building two Baidarkas. The Baidarka is a skin on frame kayak built by the native Aluetian Islanders primarily used for seal hunting.

Maritime Anthropologist, David Zimmerly wrote a book documenting various Baidarka designs he found in each bay and island along the Aluetian chain. I found a design I liked in his book and lofted my own version, adding two feet in length to the boat. Traditional baidrakas were built with very many skinny bent ribs. More recent Bairdarkas have been built with plywood stations every foot or so. My approach was to make very strong bent lamination frames at spacing similar to the plywood method. These frames are fun to construct and much lighter than their plywood counterparts but should be just as strong. I have made enough frames for two kayaks. 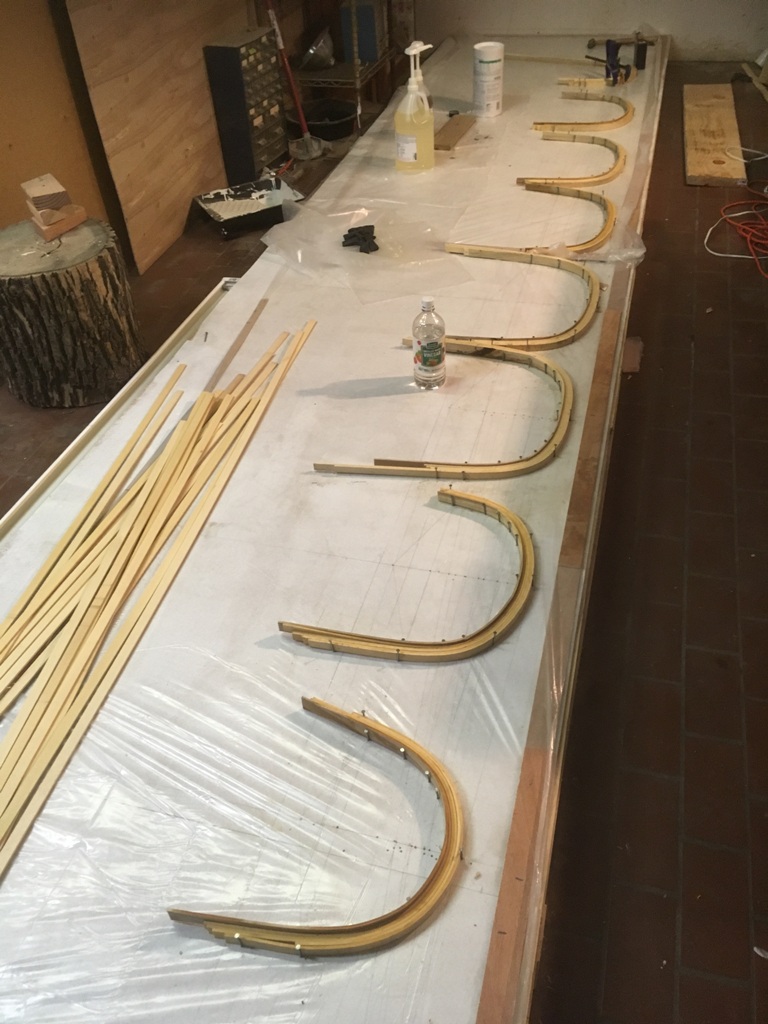 I hope to finish these two kayaks by summer, maybe have them at the wooden boat show. I’m hoping to find some long pieces of Tamarck to use as the stringers and will use nylon instead of the traditional seal skin.

I’m hoping to work on some bigger boat building projects eventually as well! One idea is a durable modern fishing boat that someone might buy instead of a big hunk of aluminum. I would use modern cold molding methods to build a very strong wooden hull with very elegant traditional finishes. I also want to build some row boats. (As an aside to boat nerdom out there: There are a lot of books written about row boats by John Gardner and other authors documenting row boats of all types: Whitehall, Wherries, Dorys, Gigs, etc. In a way these are all just branches of a family tree and I don’t think the categories are always that useful to the average boater, so I prefer to describe what the boat's function is rather than its type.) I’m interested in a rowboat that 2 to 4 people could take on an expedition. It would have some cabin space and be very seaworthy. There is a growing interest in offshore rowing races, but I envision something much more traditional looking than those boats and maybe only something you’d hop around islands in, not make a serious passage. Another possibility could be a smaller rowboat for one, something you could row fast in and get good exercise, but larger and prettier than a crew shell. I’m also interesting in river boats like the drift boats people flyfish out of in big western rivers.

I’m also planning to pitch a class to teach at some point to build a simple large work skiff that could carry a 5 or 10 horse outboard motor on and be stable enough to fish off of and light enough to really cruise with that small motor. Stay tuned for that in the course catalog someday.

Wow, so much say, so much to do. Id love to hear from any of you out there if you have ideas you’d like to share, or maybe a boat you’d like me to build!

You can find me online at: https://manywatersboats.com/