Living in the World, With the World 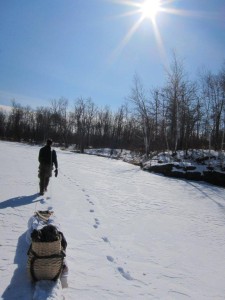 Trudging a river with food and tent in tow.

If you had driven from Minneapolis to Duluth this past March and you had been scanning the wood-line along the side of the interstate, you may have been able to catch a glimpse of a small group of people emerging from the woods, looking like they were also walking out of the 18th century. They would have been wearing buckskin, wool and beaver hides and been pulling 10 foot-long handmade toboggans with their food and gear.

This wasn't a survival TV show or a re-enactment event. It was a group of friends traveling by foot over the snow, using gear they made themselves, to their destination. It was an experiment and experience in "honest living." And for at least one of the participants, North House instructor Nate Johnson, this was the realization of a core life philosophy: being connected. 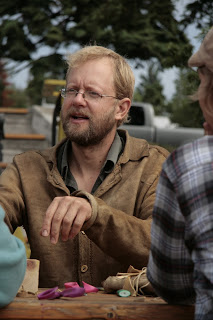 Nate is a native to Northern Minnesota. In his mid-20s, driven by a longing for "something different" than the city, and by a growing awareness of the unknown and unintended consequences of supporting a globalized, industrialized system, he began seeking a new way to live. He moved to New England and tried his hand at farming, construction and stone masonry.

Truly being connected to the things we use in our lives is no longer a simple, easy or comfortable endeavor. Most of us use products from China and buy shirts fabricated in El Salvador and fill our houses with objects made with lots of dirty energy. What impacts do we have across the world from the things we use? Who are we affecting? It's almost impossible to know. Nate wanted to learn to directly source materials and create things with his own two hands (his website, which is worth checking out, is ivegottwohands.com).

Nate had a continual impulse to live more simply. He wanted to get closer to the source of the things he used in his daily life. He started observing the trees and plants and mushrooms and animals around him more closely. Which are edible? How and when are plants harvested? He started looking at the tools and objects around him. How is a canoe made? Or this knife? Or the clothes we wear?

Making things himself and harvesting materials and food allows Nate to be intentional about how he interacts with the world. He strives to live a peaceful life - not in thought or philosophy, but in daily action. Crafting came out of an impulse "to see the effects of my actions… to take into account other people and all other forms of life. When [the effects of our lives] become invisible, that's where problems can occur."

To live such a connected life means that Nate's life is dictated by the seasons:

Autumn carries him to the still waters of north-central Minnesota and the abundant wild rice stands. He and friends harvest wild rice into their canoes, parch it, jig it, winnow it. That food stash, which can amount to 200 pounds, is supplemented by harvesting other fall foods like mushrooms, cranberries, whitefish and acorns.

His snowshoes, toboggan and beaver fur aid his journey through winter, the time of year for hunting and trapping. For his journeys, he sewed himself a lightweight cotton canvas tent that holds six people and a travel stove for heat. He hunts and traps for food and furs. During the winter walkabout mentioned earlier, three people walked 19 days and 120 miles and ate mostly wild harvested foods that they packed. Their diet was supplemented by trapping five beavers along the way. 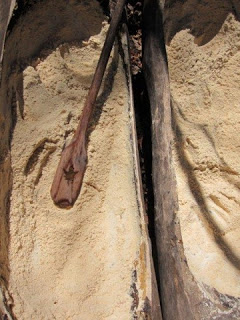 Maple syrup heated until it crystallizes to sugar

Then comes the sweetest season of all: spring and maple sugaring. A primitive camp is built in a maple forest on state land. Weeks of work ensue: sumac taps, buckets, barrels, large boiling pan and fire, sugaring pots and more fire, round-the-clock shifts tending the fire, meals cooked over a…you guessed it: fire. The year's supply of syrup and sugar is made while the snow melts and the trees begin to wake up. Spring is also the time for netting smelt and suckers, and hunting down ramps, nettles and other greens.

The summer brings a chance for some rest - music and dance - before the birch bark sheds its skin and the berries turn from green to red and blue and black and juicy. And not long after that, the wild rice is ripening again.

Nate is a multi-talented crafter and instructor. He builds canoes, snowshoes, toboggans, crooked knives, and baskets, he tans hides and sews leather, he harvests wild food year-round, and he teaches wildlife tracking and plant identification and much more. The crafts he practices are not hobbies. "Every craft is generally a part of my lifestyle and they all feel an equal part of it." When asked which craft he is most drawn to, he cannot choose. "They exist in balance. If I do any one for too long I get tired of it. It throws everything else out of rhythm." 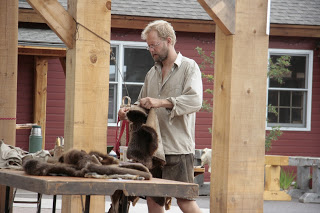 Finding good teachers has been important to Nate. Among others, he has sought out knowledge in Northern Quebec from Cree elders, some of the last people there with memories of their ancestral traditions. He has organized group "cultural tourism" trips to stay and learn with them in the bush. The trips were "almost a pilgrimage. This is where the knowledge has lived and still lives. I feel like myself and my peers, we're looking in books, we're trying to understand a way of living that isn't practiced anymore. To go to [the Cree elders] is to see it directly - it's really powerful."

And Nate wants to pass this knowledge on. "I'm trying not to have it be a personal journey. The idea is to share and teach; if people are interested, that's really nice, but you can't make people interested." However, says Nate, "people want to have a real experience of living. That's why people come to North House Folk School. We want to have some connection to our lives." 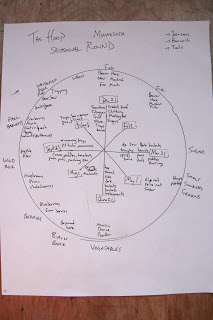 Nate's map for the seasonal harvests and tools.

The deeper and more directly he connects with the food and tools and clothes he uses in his life, the better he says it feels. His dream: to travel by foot, by canoe, and by snowshoe. His journey: "what does life of true connection look like? I don't want to talk about it - I want to do it."

He's got two feet too.

And doing it he is. If you are driving on a highway past a lake or forest in Northern MN anytime soon, take a look out your window. You just might see Nate out there, harvesting food or materials for his next project, connecting with the world around him with his own two hands.

Nate occasionally teaches courses at North House, keep an eye on future catalogs for a chance to take a course with him.