Kim Ode on the craft of biscuits

Read North House instructor Kim Ode's article on the craft of cooking and why baking biscuits should be a part of our everyday lives.

When we think about craft, our thoughts may drift toward pursuits that are artistic, inventive and laborious. Think of turning a tree into a basket or a bowl or a building bound with pegs; a sheep’s wool into a rug or a pouch or a patterned pair of mittens; a bar of iron into an ornate gate, a practical grate or a useful knife.

Such manual skills were honed over generations, first passed along as practical, and often crucial, knowledge before mechanization nudged such work into the realm of reverence for tradition. For better or worse, we now tend to place craft on a beautiful handmade shelf. We honor its artisans, all the while feeling a quiet relief that our daily lives do not depend on being so skilled.

Yet: Consider the biscuit.

A mixture of flour, baking powder, salt, and a smidge of sugar is tossed with cubes of cold butter, bound with milk (ideally buttermilk), then rolled and folded and rolled and folded to create layers that separate and rise in a hot oven.

The result is an ethereally tender stack of buttery leaves with just enough of a golden edge to hold up under jam, or gravy, or more butter.

This, too, is the result of craft honed over the years. Early biscuits were hard and stodgy lumps of flour and water stored in barrels and meant to last over sailing ships’ long journeys. Early settlers in New World colonies could bake each day and improved on the texture, first by beating in air, and later by adding leavening agents such as baking powder or baking soda, making biscuits more tender.

Early recipes reflect the importance of a home baker’s familiarity with the process. Flour was measured in handfuls, salt in pinches, butter in knobs, and milk in ladles. Some days, a baker needed to add more flour; on others, more milk until the dough felt “right.”

Then into the oven, where the temperature was gauged by how quickly a toss of flour onto the heated bricks turned a particular shade of brown. Then the biscuits would—wait for it—bake until done. 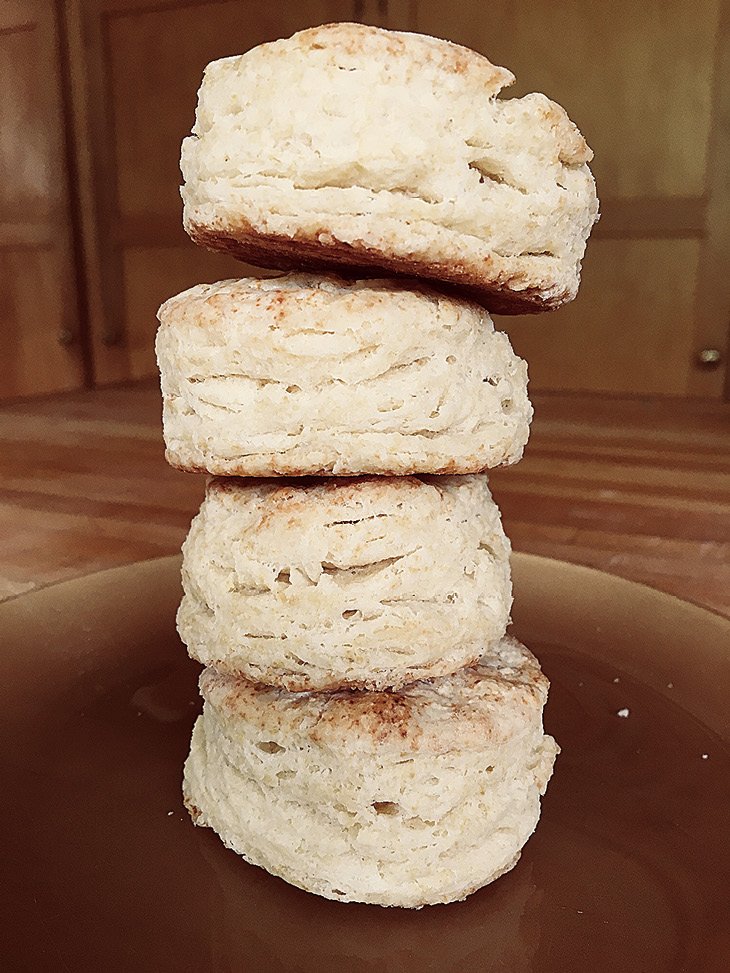 While refrigerated tubes of dough are pretty amazing as technology, their results will always pale against a hot biscuit baked from scratch.

This process hasn’t changed that much over the years. We can measure more accurately, and heat is more controllable, but the essential craft of making biscuits remains the same.

So why aren’t more people making biscuits on a regular basis? I have several theories.

The craft of baking can get short shrift because it happens in the kitchen, an environment so familiar and mundane that we tend to undervalue the work done there. Plus, the art disappears by the end of the day, consumed with pleasure, but leaving no trace.

There’s also the perplexing contradiction of skill. If someone can make a biscuit, or other baked goods, with confidence, it’s easy for them to shrug off the intricacies. New bakers then wonder why they’re struggling, throw down their aprons, and reach for the tube in the grocery’s refrigerated case.

Then there’s social media, which has created a sort of helpful intimidation. Google “buttermilk biscuits” and “recipes” and you are rewarded with 1,740,000 results. Sheesh.

That’s a huge change from past decades when the only recipe you followed was your mother’s or grandmother’s. We talk about lost generations of bakers who for various reasons never learned at an elder’s elbow. They missed witnessing that moment when butter and sugar are properly creamed, or how to fold beaten egg whites into a batter, much less experience the high-wire act of separating an egg.

No wonder food companies found a ready market for convenience and ease. And, while those refrigerated tubes of dough are pretty amazing as technology, their results will always pale against a hot biscuit baked from scratch.

So, I’m heartened by signs that we’re starting to fold the craft of baking back into our everyday lives.

Certainly, the pandemic inspired a lot of bored, anxious and hungry people to tackle making bread, to the point where finding yeast became a search worthy of Indiana Jones. Will folks keep baking? Many will, partly because they discovered the economical benefits. But I suspect they also awakened some primordial satisfaction rooted in feeling skilled, creative, practical and focused.

Home baking has gotten a huge boost with the phenomenon of “The Great British Baking Show,” first on public television, and now on Netflix and YouTube. While the challenges can get rather ridiculous, the essential message endures: Baking is a series of basic skills that are mastered with repetition. Plus, you end up, almost always, with something delicious.

In other words, baking—like woodworking, blacksmithing, weaving and more—is a craft, but a craft accomplished from start to finish each day. It feeds your soul, but also your belly.

Its skills are straightforward: Read the recipe before you begin. Read it again. Preheat your oven. Measure carefully. Take your time.

Where to start? Go to: tfrecipes.com/betty-crocker-biscuits-from-scratch. Here you will find Betty Crocker’s biscuit recipe. There are others, but this one has withstood the test of time, which is what craft is all about.

–Kim Ode is a Lead Foods instructor at North House Folk School, where traditional craft is taught on the shore of Lake Superior.