Meet Nathan White, one of the new residents in the Artisan Development Program at North House, in this introductory blog post.

Hello! My name is Nathan White and I’m one of the new Artisan Development Program artisans here at North House Folk School. Being my first blog entry since arriving in September, I thought I’d write a bio and introduce myself.

For the past ten years, I have predominantly lived in Minneapolis, where I’ve been a wood worker and craftsperson. I was born in Milwaukee, Wisconsin, and had a couple year long stints when I lived in the Mid Coast region of Maine. Saying I’m a wood worker is rather ambiguous, so to be specific, I mostly turn bowls, make some small cabinets, and have been getting into relief carving. 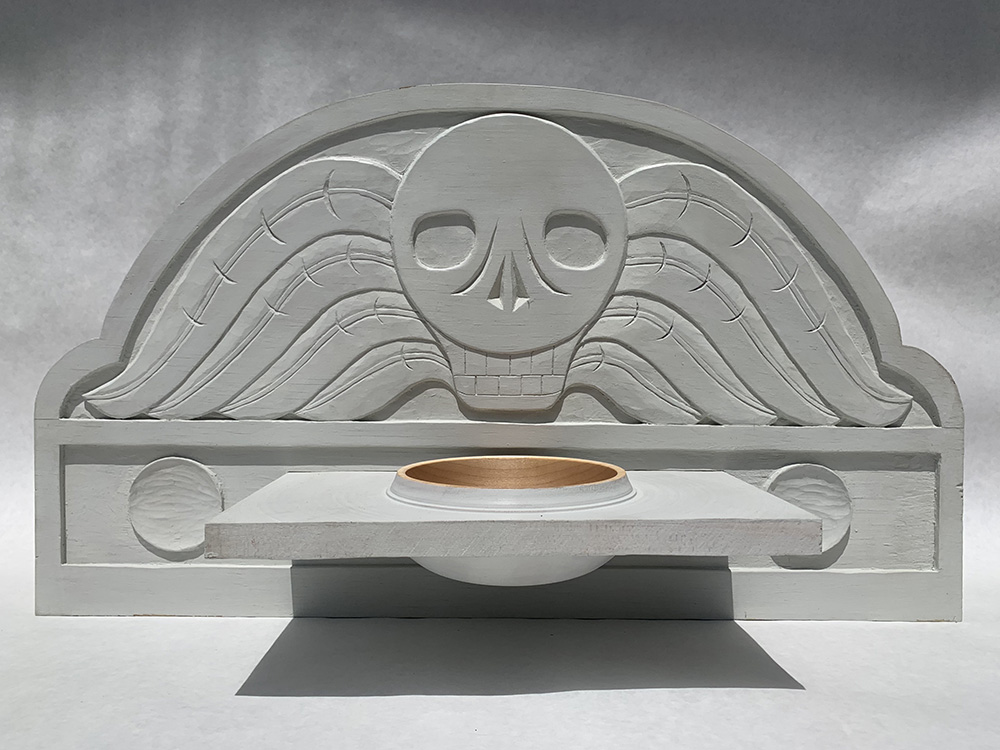 My introduction to woodworking was through spoon carving; I saw one, needed to try it, and that’s what kicked it all off. After a year of carving essentially what would be artisanal kindling shaped like spoons, I ended up at the Carpenter’s Boat Shop for a wooden boat building apprenticeship in Pemaquid, Maine. During my time as an apprentice, I took on as many projects as I could after hours; making things ranging from ladder back chairs, a harp, Shaker oval boxes, oars, paddles, and maybe most importantly, where I first learned to use a lathe. The Boat Shop had three main instructors at the time, two for new builds and one for boat restoration, and after my apprenticeship, I ended up staying the summer with one of the Boat Shop’s instructors, Kenneth Kortemeier, to help him and his wife Angela build a house off-grid. Following that summer, I would go back and forth between Minnesota and Maine working at a wooden boat restoration shop and for a timber framer, respectively. In 2016, I was a recipient of the Folk and Traditional Art grant from the Minnesota State Arts Board (MSAB) which funded a project to study faceplate turning techniques with a focus on reproducing types of traditional and historical wooden bowls from Scandinavia. 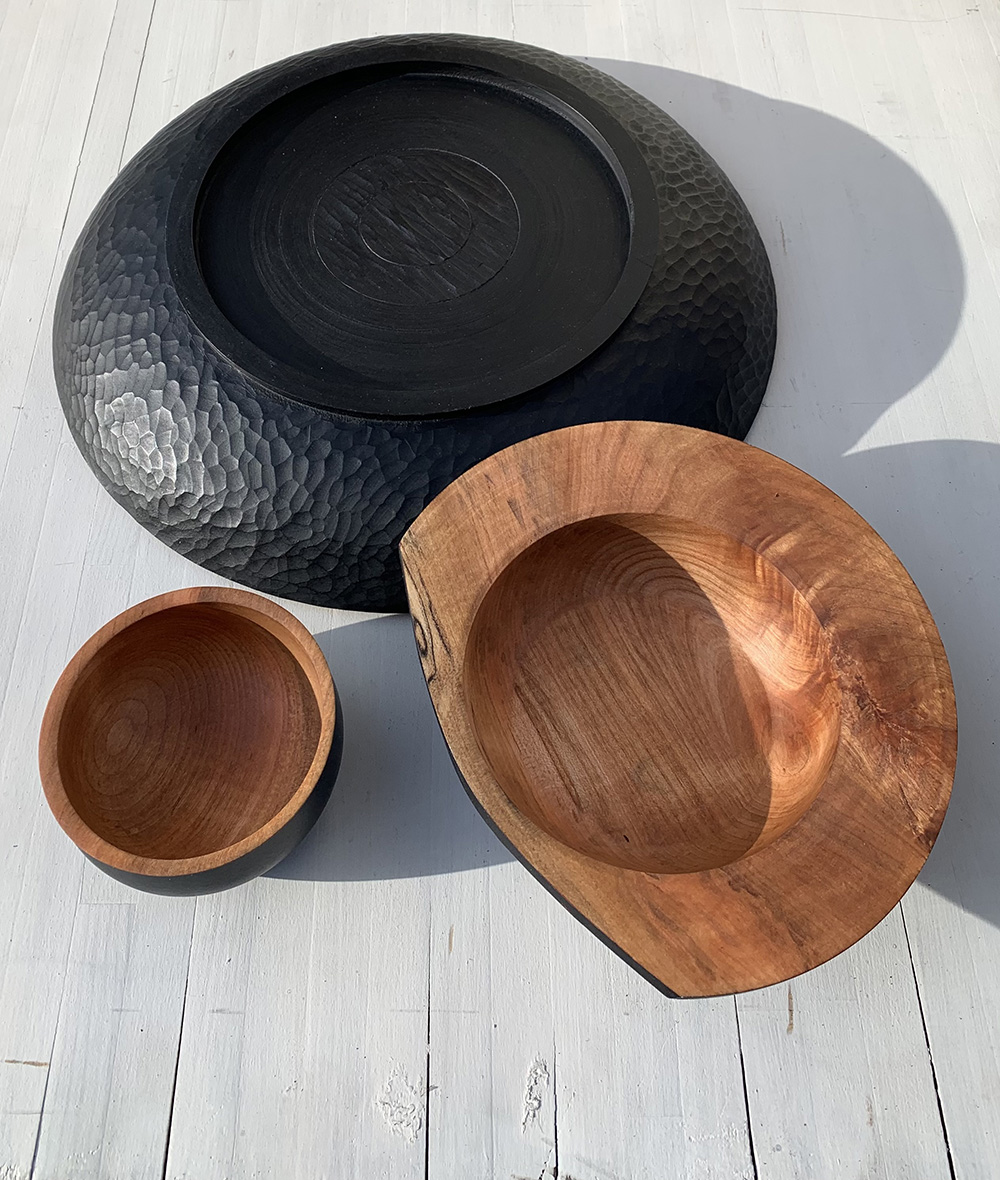 After that grant project I would spend the next few years selling at farmers’ markets, craft shows, doing commissions, and working at a furniture shop before getting another grant from the MSAB, and doing my first residency at Anderson Ranch Arts Center. During that second grant project, I built off of concepts of bowls being used in celebrations and ceremonies and explored the idea of bowls being used as vessels for sacred objects. I made small shrines and altars, each having a wooden bowl as the vocal point of each piece. As a resident at Anderson Ranch, that project kind of kept going; morphing a little along the way from pieces that were more relief carving centric with a bowl, to incorporate small curio cabinets or reliquaries. 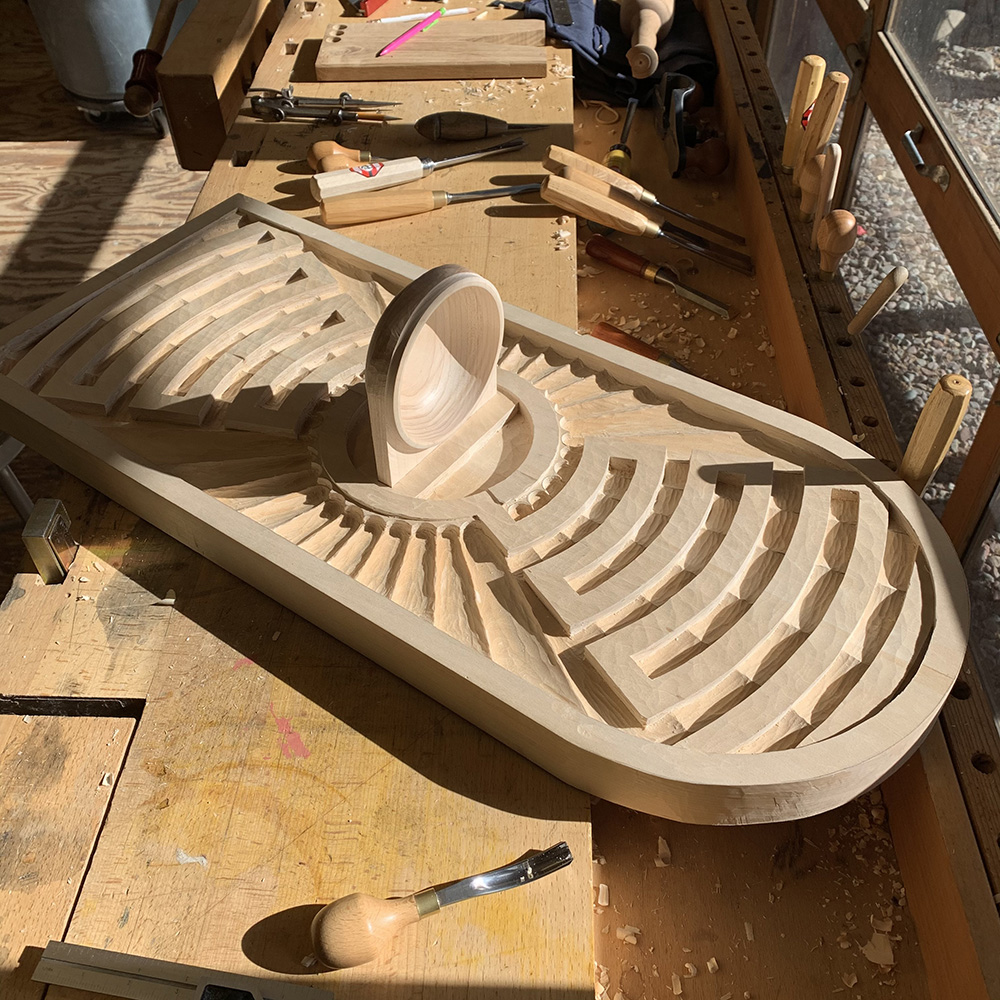 Throughout my time in craft, I’ve been privileged to work for, apprentice with, and help out many different craftspeople in many different mediums, and that is something that I look forward to continue with my time here at North House. I’m really fascinated with what I can only think to refer to as “craft trees”; looking at who has worked with who, and how that has influenced each person’s work. Every time I work on something, I still have the voices in my head of different people who have taught me things guiding me along on current projects. The world of craft is interesting too because of its focus on tradition; using the same tools to create a thing that has been created by thousands of people for hundreds of years, and how people manage to stay true to that, but also let their personal style shine through. In my application for the Artisan Development Program, I wrote that I don’t think of mastering a craft as a flat line of an accumulation of knowledge and skill, but rather as a cycle, or circle of skills being learned, practiced, taught and passed a long to other people. I’m excited to start teaching classes while I’m here and to start to strengthen that cycle of knowledge, preservation of craft, and to keep my “craft tree” growing and expanding, always as a student, but soon to be as a teacher as well.

*photos of Nathan by Roshni Gorur, Courtesy of Anderson Ranch