Christine Novotny talks about how she came to appreciate and create what could seem a straightforward, utilitarian objects - towels. Learn more and see what she has been working on in her new post!

Towels. What a straightforward object. Before I was a weaver, I disregarded towels all together. Every towel was equivalent to the next - cloth for absorption, whether that be drying your hands or wiping up spills. Heck, even after I started weaving I was completely disinterested in making them. After completing my first weaving project at my shared studio in Minneapolis, my teacher recommended making towels, and I grimaced at the idea. Boring! At that time, everyone in the studio was making towels out of 8/2 cotton. I already have an aversion to doing what everyone else is doing, plus towels...why would I want to weave plain old towels?

Then I remember going to a weaver friend’s house and seeing her personal set of handwoven twill towels sitting on the kitchen counter. They had just come out of the wash, and they were all folded up, stacked in a neat pile. I reached out and touched one - so soft! So sturdy! So beautiful! And that’s when I knew, it was time to weave towels.

For such commonplace objects, towels are complex and time consuming to create (yes I know, if we had a penny for every time a craftsperson said that about anything…) My first towels were...not great. The selvedges (edges of the cloth) were wonky as I struggled to find the right tension with using cotton, the right angle to lay each weft thread. My sett (the amount of warp threads per inch) was too low for the pattern I had chosen, so my beautifully colored warp was lost to the weft that packed in too tight. The tension of my warp was loose on one side,  and each towel was longer on one side than the other. More of a rhombus than a rectangle. And then there were hems to sew - and I didn’t know how to use a sewing machine. But they were my first ones, and it only gets better from there.

I typically make my towels out of a thin cotton yarn called 8/2 cotton. The yarn is unmercerized, which means it has not gone through any chemical treating process and will shrink after washing, as cotton does. I warp a whole loom up, usually winding enough warp on to make between 4-10 towels at a time. To make warping a whole loom worth it, weavers typically wind enough warp to make multiple of the same object. Next up, I weave and weave and weave! I weave to the desired length and then put an obvious marker thread in so I know where one towel ends and one begins. I tend to weave the first and last ⅜” of my towels with cotton sewing thread. This makes the edge that gets folded over in the hem less bulky.

When I take them all off the loom, they are a big, connected, heaping pile of fabric. That’s when the finishing begins. There are differing opinions for finishing processes and in what order to do things but I zig zag stitch the edges of each towel close to my “cut” line, cut the towels apart, fold the edges twice, and then machine straight stitch the hem. Some insist that a handwoven towel deserves a hand sewn hem. I don’t disagree, but I still typically machine stitch my hems. 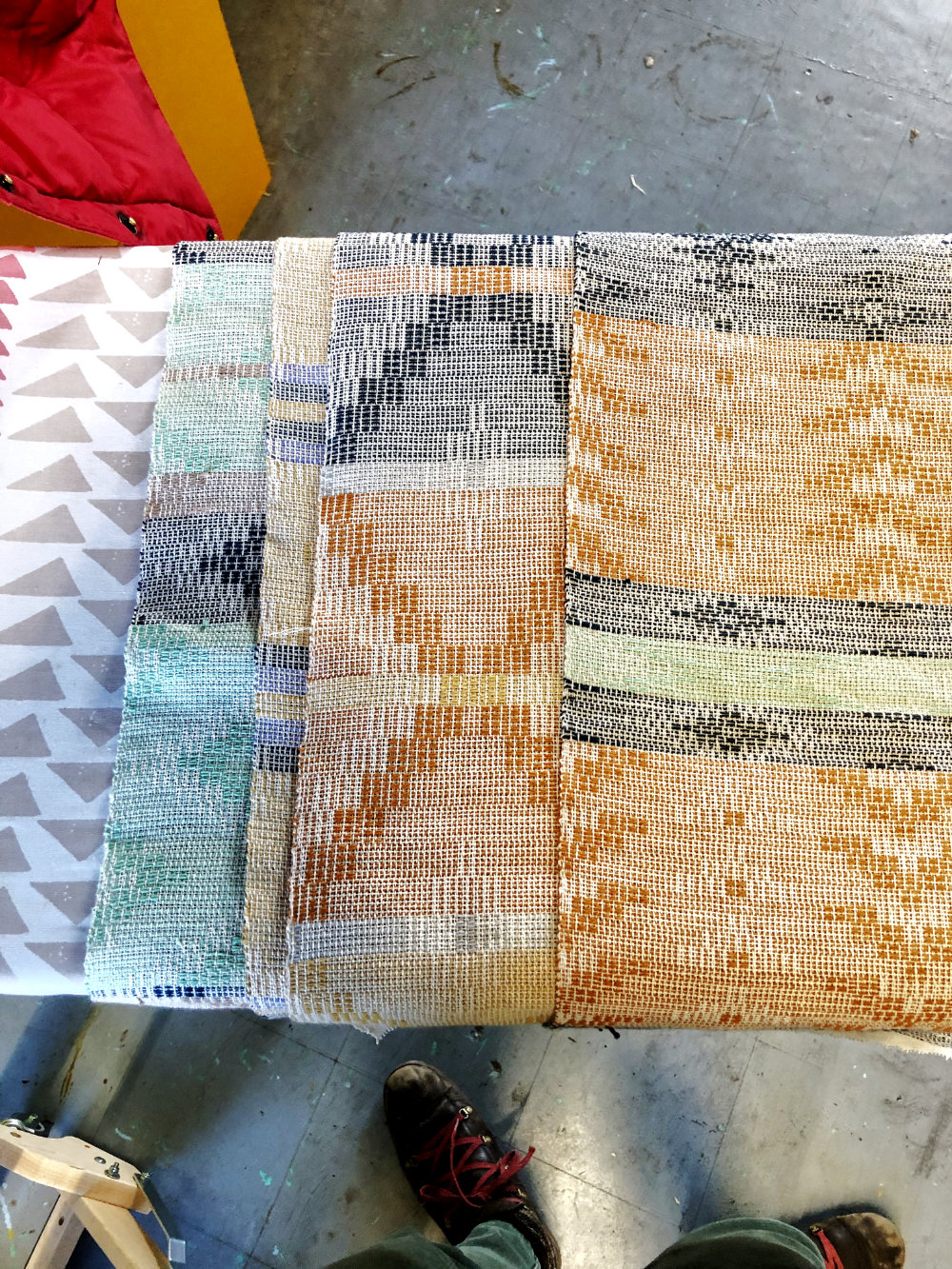 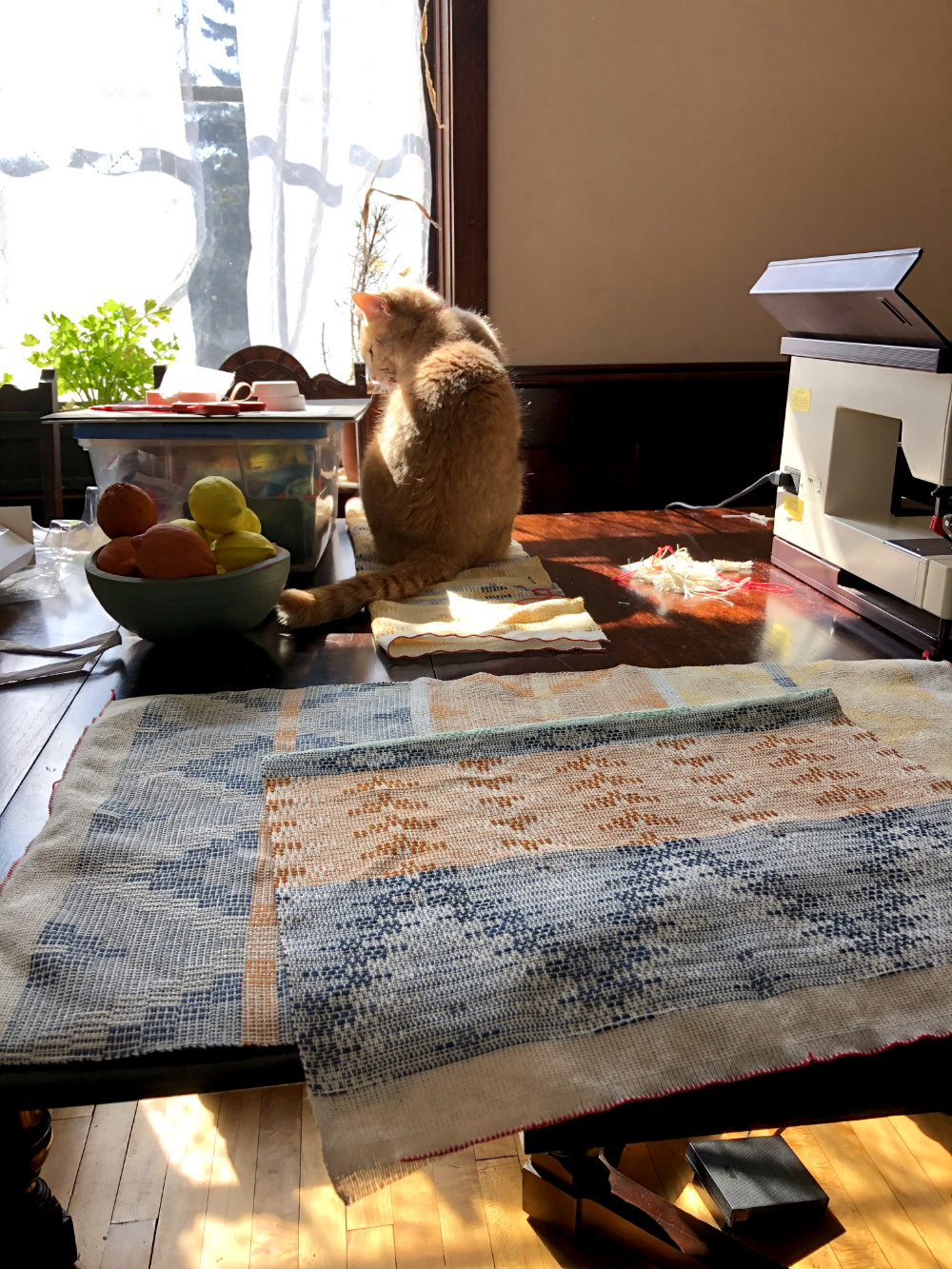 Hemming the towel edges - even my cat Meta can’t resist a chance to get in on the handwoven action!

Next up is wet finishing. One thing I love about towels is watching this mutable material transform. When woven items come off the loom, they’re called “web,” not cloth. Before the finishing process, they are stiff, crunchy, and it looks all too obviously...woven. It’s not considered cloth until it goes through its appropriate finishing process. Like many materials, this transformation comes down to water and heat. Water helps the fibers bloom and heat encourages the fibers to tighten up and shrink. My cotton towels get soaked in water til the fibers are fully saturated, thrown in the washing machine with warm water, then the dryer, taken out while still a bit damp, and pressed with a hot iron. Throughout this process, they shrink anywhere from 15-20% lengthwise and roughly 10% widthwise. Each weave structure and material will have different shrinkage rates, so I always do some sampling at the beginning of a project to know how long I need to weave them to achieve the correct length after they are washed. 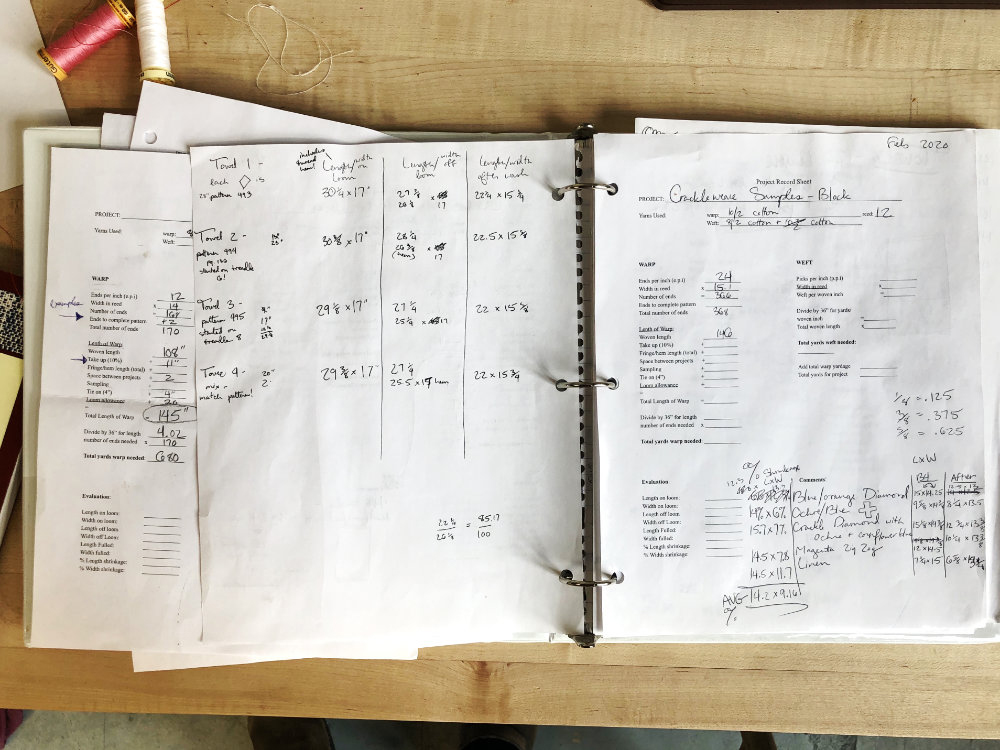 All my notes and shrinkage rate calculations

Here’s some photos from my last batch of towels - 4 dish towels using “crackle weave” weave structure in lakeshore colors. I love these for how much pattern and color play I can get from one weave structure. Look how they fly in the wind! 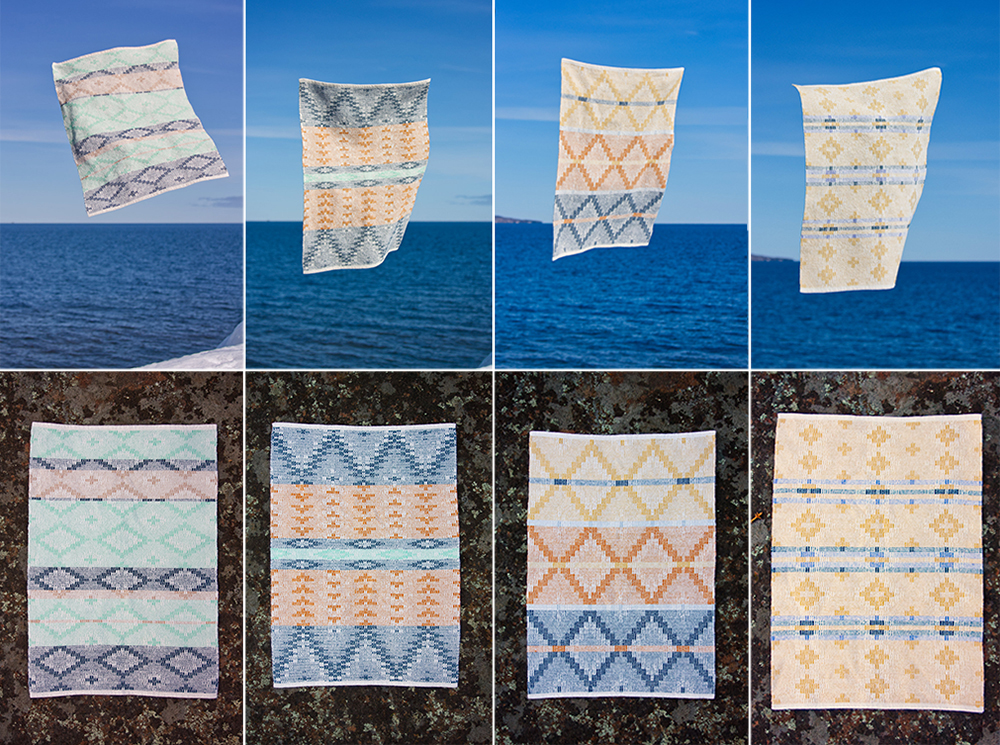 I’m currently working on some cottolin warp and linen weft bath towels - my largest and luxurious towels to date! Linen is highly absorbent and increases its tensile strength when wet. It can hold 20% of its weight in moisture, so I think the material will prove fine for bath towels. The pattern is an 8 shaft, 12 treadle plaited twill pattern. 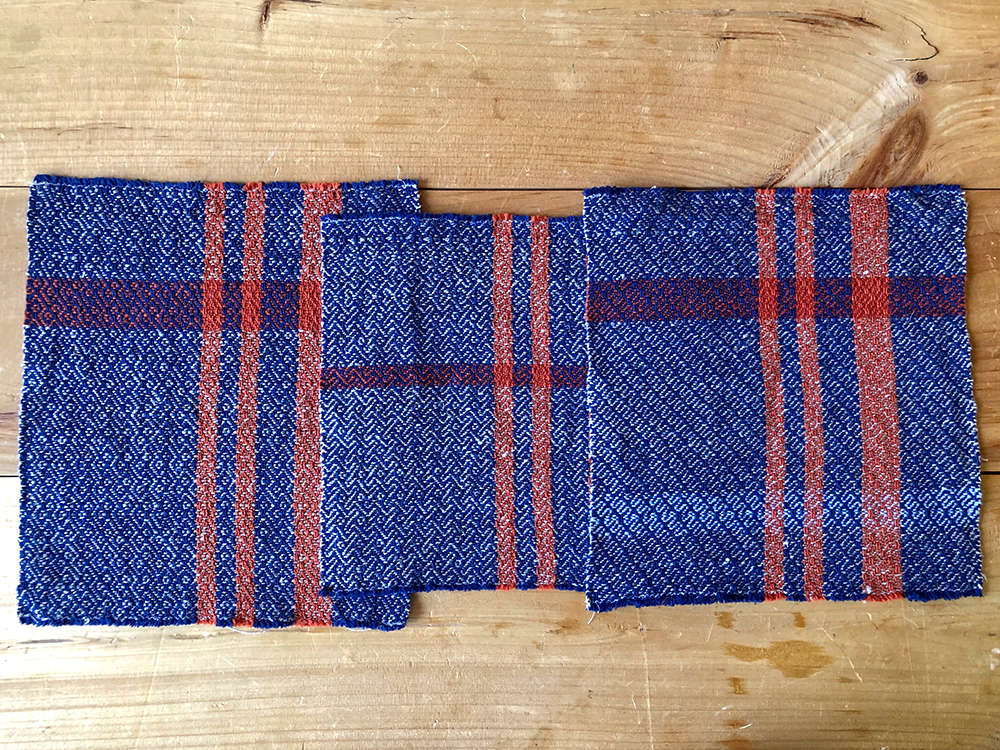 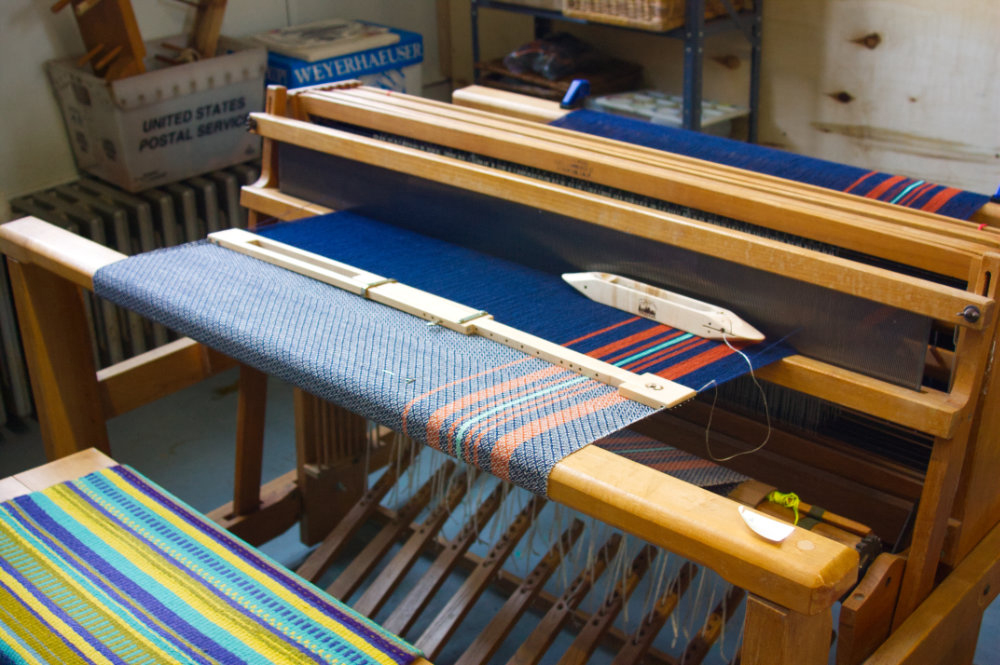 Towels are what I love most about weaving. They are functional and one’s appreciation grows through touch and use. They add a pop of color to a room and a truly lovely final step to washing our dishes and our hands. May you all find handwoven towels in your future! Let me know if you need any ;)