I hope spring is treating you well.  In my estimation it's still winter here in Cook County.

I’ve been super busy since I last wrote.  I’ve been working on putting together a project to build a replica of a Herring Skiff for the Cook County Historical Society.  They have an old skiff rotting next to the Bally Blacksmith Shop in Grand Marais and I am going to take the lines off it in June and later, build a new boat according to those dimensions.  More on that later.

What has been taking most of my time recently, is working on wood canvas canoes.  I spent two weeks in a class taught by Jeanne Bourquin and Tom Healy, where we were building a canoe for the Cook County Chamber of Commerce to raffle off this summer. The proceeds to towards The Great Place Project, which gives out small grants for streetscape improvements in Cook County.  It was a fun project. A lot of people from the community volunteered to help, in particular, many folks from Stone Harbor Wilderness Supply. The class was two very intense weeks, with several 11 and 12-hour days. In the class, we also had two student groups in addition to the chamber boat so in total we built three boats in two weeks.

Coming from a background more focused on larger and/or custom-built craft, I found the particulars of wood canvas canoe building quite interesting.  The boats really seem to be a product of the industrial revolution. The building jigs (forms) are super detailed and would take a lot of time to build, so I cant imagine building one of those unless you planned on building several boats or more.  There are several ways the building process is streamlined to make building faster than on a typical wooden boat. For instance, most of the planks are laid straight on, with no shaping. Only when you get to the fattest part of the boat are planks shaped.  Then there are only two or three courses per side of planking that require shaping. This area with shaped planks is called the goring and is one of the defining features of a wood canvas canoe. 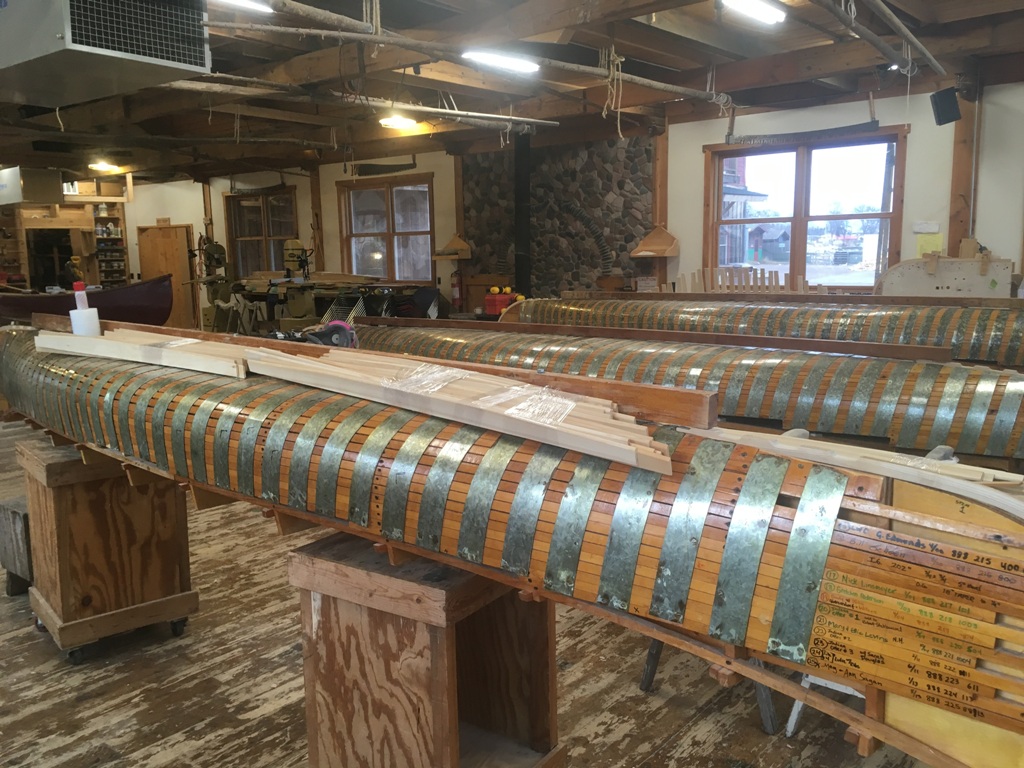 Another thing I found really interesting about the wood canvas canoe is that the primary structural member of the boat is the inner gunwale.  Canoes don't really have a keel so there isn't a backbone to give the boat structure. Instead all ribs are kept in place by being nailed into the inner gunwale.  Since these inner gunwales are so important, Tom and Jeanne like to use very nice pieces of Sitka Spruce. 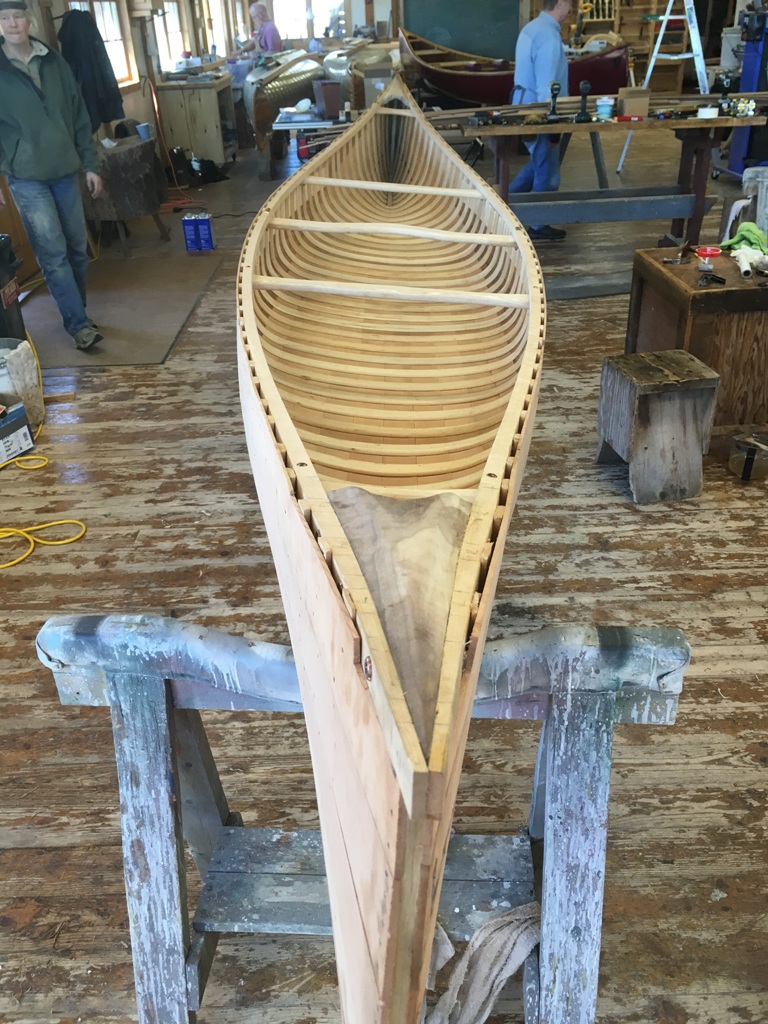 I played around with lots of color in the boat I built, which is kind of typical for me. The hull was mostly western red cedar with some very dark resinous cedar in the goring and a highlight of very yellow white cedar.  With those three colors, I started calling the boat Spumoni as I was building it. The outer gunwales are Cherry, the breast hooks are black walnut and the thwarts and yoke are ash. 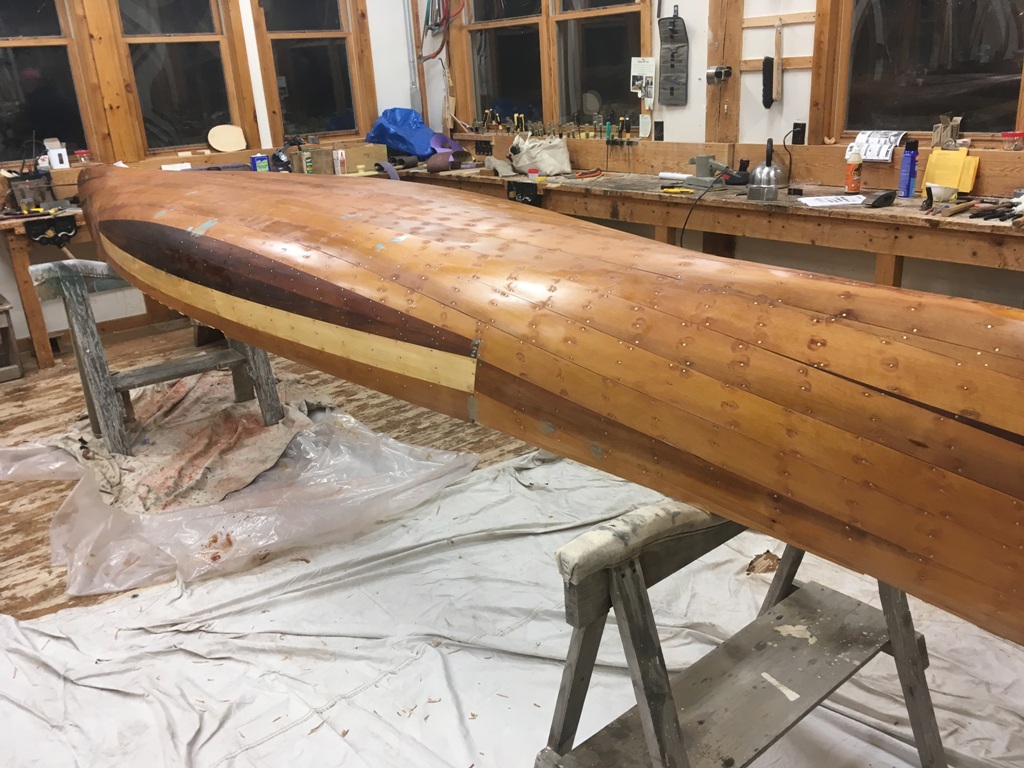 After the class ended I still had to finish the boat.  I’ve been using Pettit paints and varnishes because they usually give me great results.  I use a special brushing and reducing thinner with the oil paints and varnishes. It is made with chemicals like kerosene and nathpa.  It slows down the drying of the paint so it has time to smooth itself out before it dries and helps it stay in a suspension so it doesn’t run as quickly.  When you're in Grand Marais this summer come buy a raffle ticket for $10 and get a chance to own this beauty. 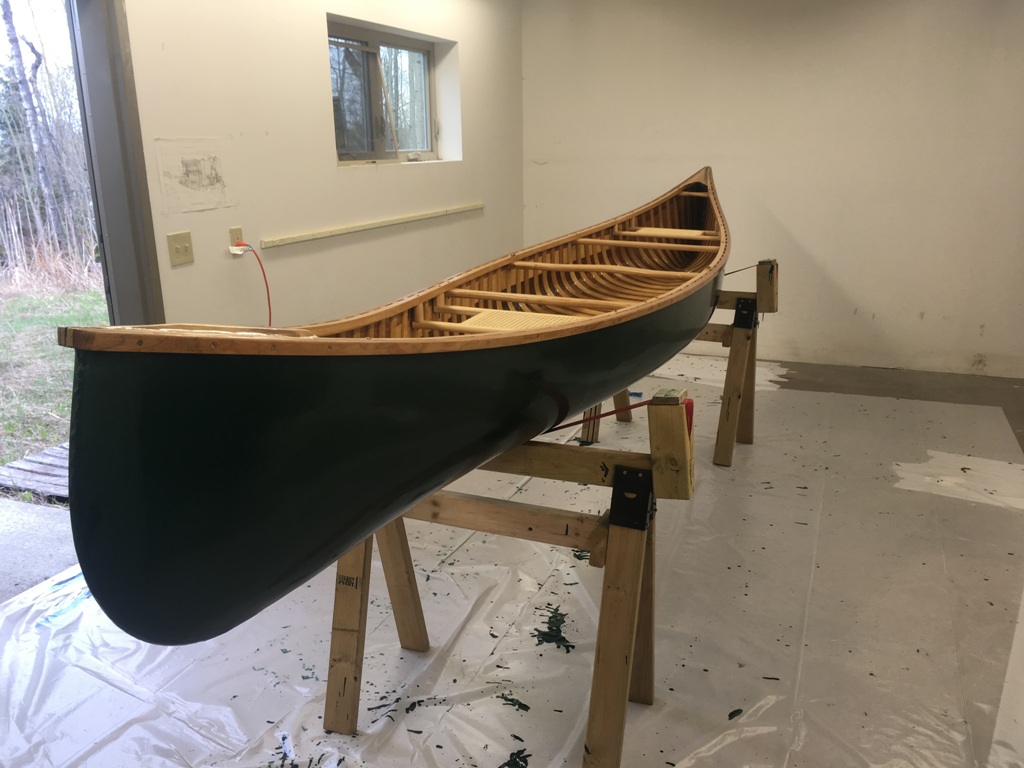 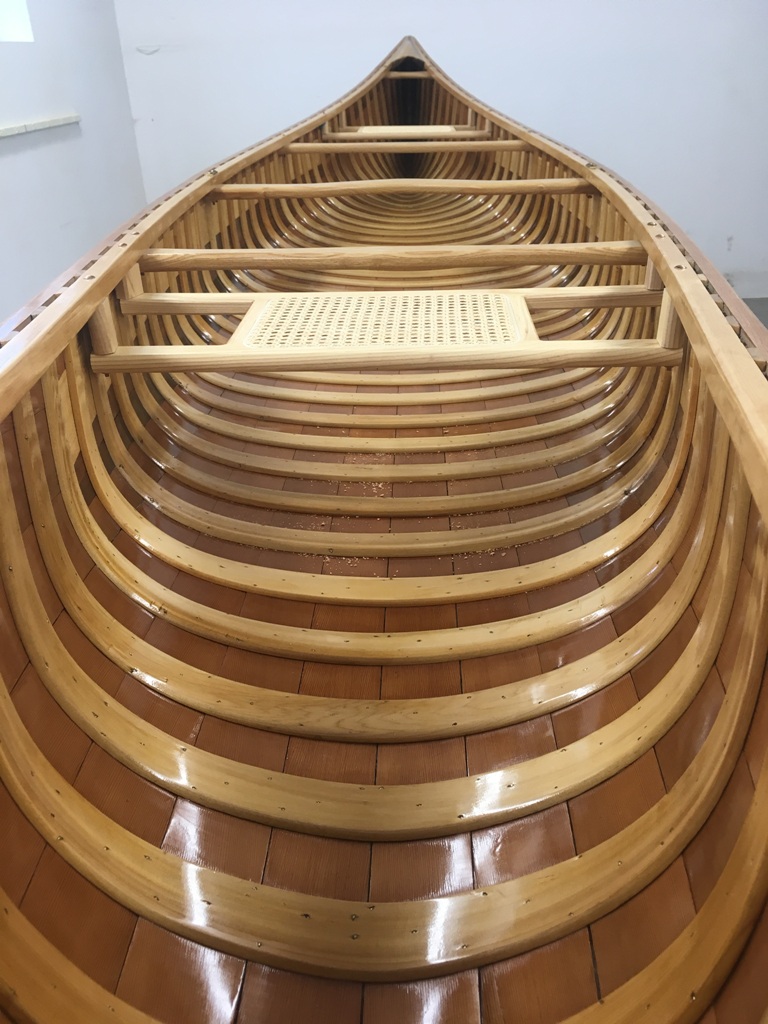 Over the past week I have been up at YMCA Camp Menogyn on Bearskin Lake in the BWCA.  They have many old wood canvas canoes and over the recent years have not had much capacity to take care of them and many of them have fallen into disrepair.  I am currently spending a week training in their staff who will be responsible for taking care of their canoes this summer. We are working hard to do as many planking repairs and recanvas jobs in a week as we can.  It has been fun seeing all the different canoes. There is one I recognize as an Old Town and one Joe Seliga boat. But each boat has different planking dimensions, which is interesting. 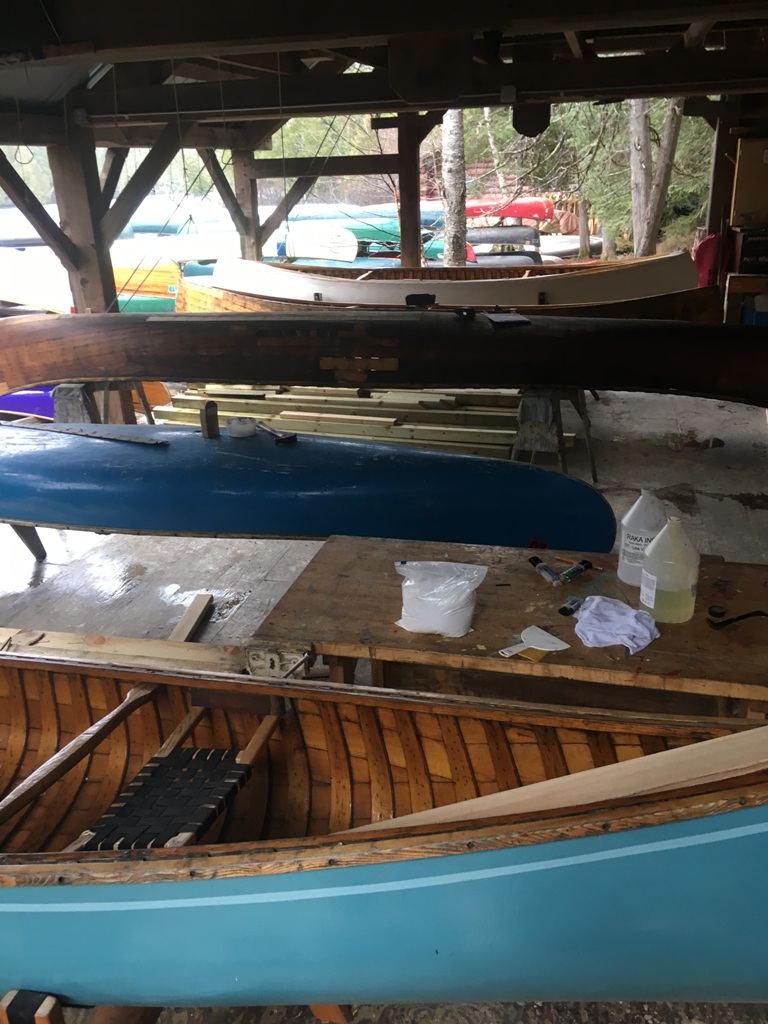 One final note, last week I help long time North House supporter Marco Good repair North House’s old Bateau.  It is a cool old row boat and I am glad Marco got me interested in the project. The boat had a rotten plank that needed to be removed and have a patch scarfed into its place.  We also replaced the gunwales. Those of you who like the Bateau should be able to take Marco or I out for a row this summer! 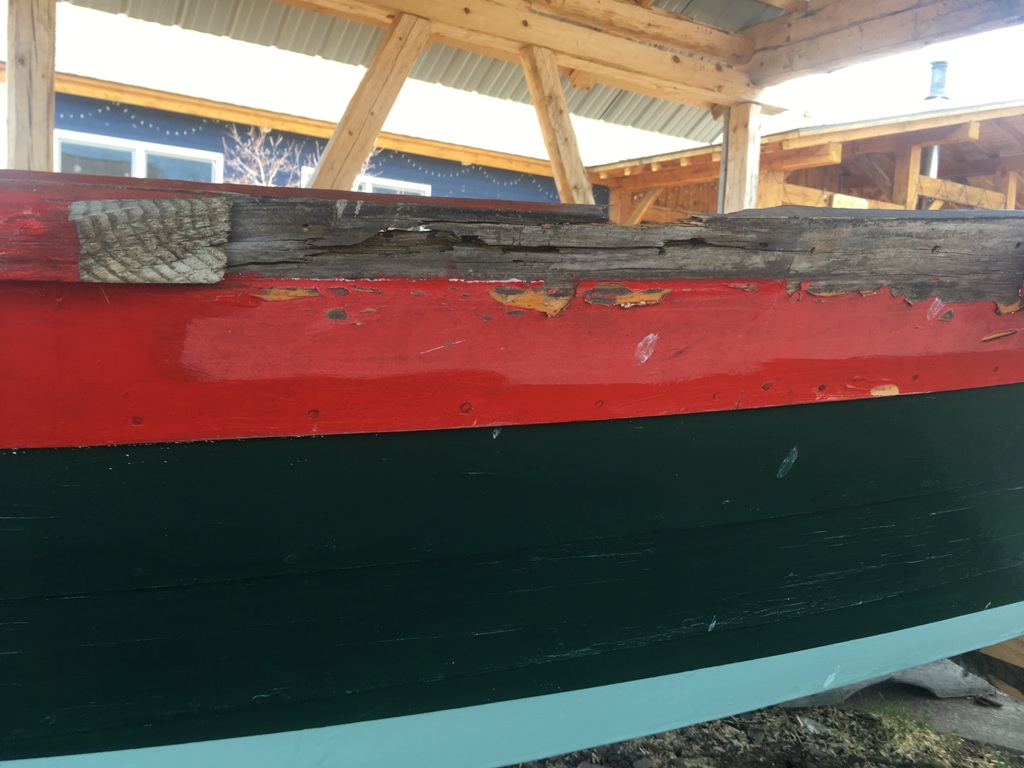 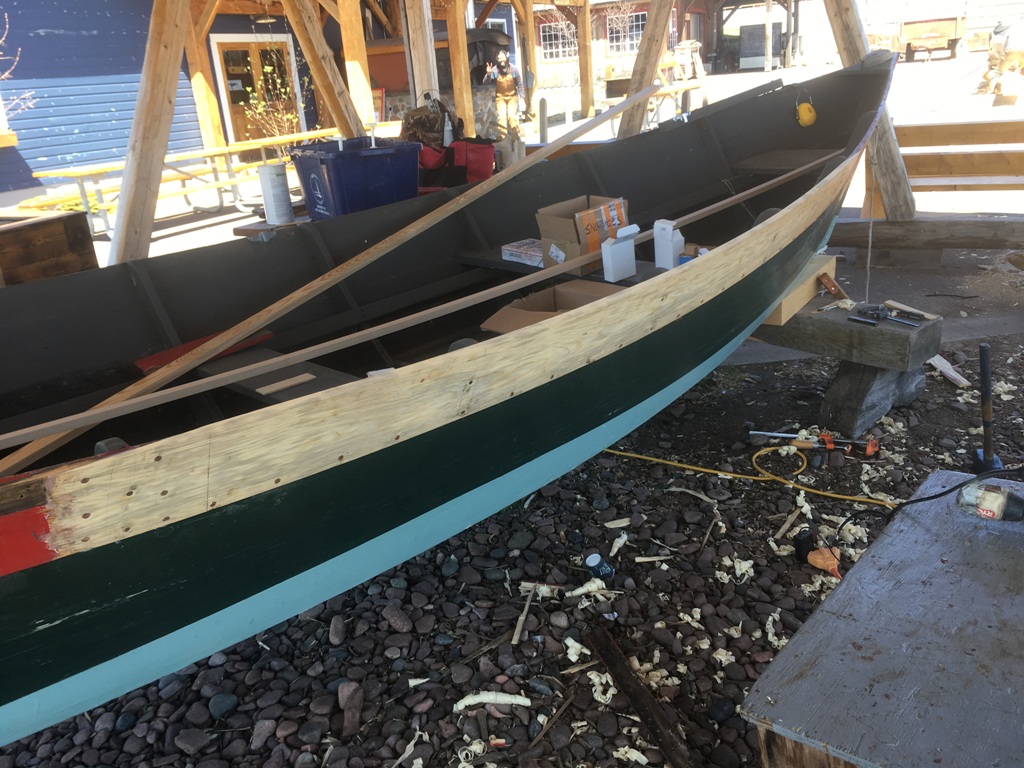