But what is your financial goal with all of this? 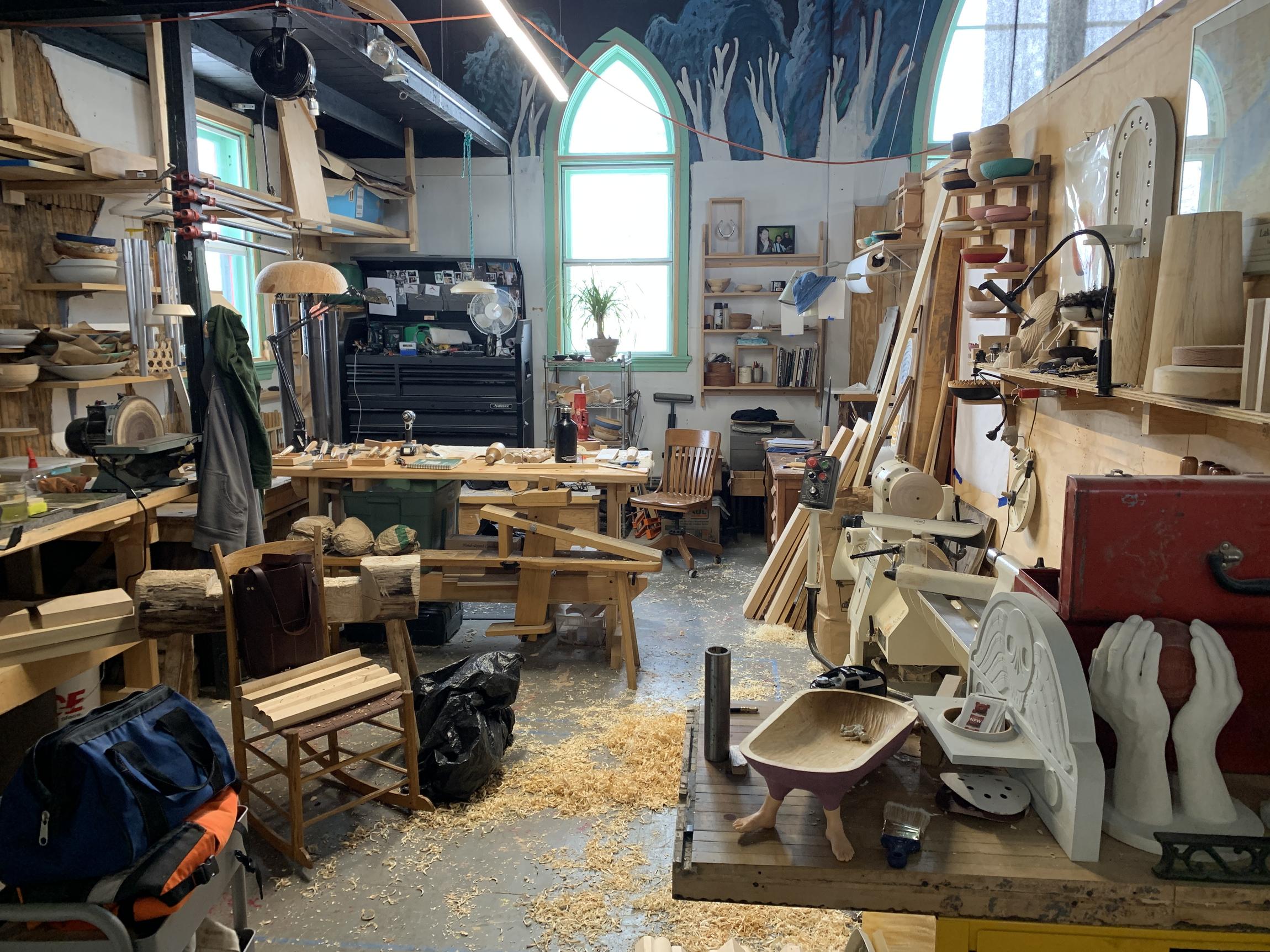 Once a month, my fellow resident artisans and I open our studios for a couple hours to the public. It's a time for people to come in and get a glimpse of our work spaces, current projects, and talk with us about our process, or what we're working on at the moment.

A couple months ago I was talking with a guy, who towards the end of our conversation, looked around and asked:

"So, what is your financial goal with all of this?"

My studio can be pretty insane looking; there are half-finished projects everywhere, stacks of lumber, wood shavings galore, tiny rubber hands stuck onto bowls or carved coat hooks, a mask and figures I carved that Hieronymus Bosch might like.

I then had to tell him that I didn't have one. That if it were up to me, I would never have to sell anything I made; that I would much rather be a part time dish washer somewhere than have to rely on selling things that I enjoy making. That right now, it's more about creative process and progressing as a woodworker, that I have this ever-present urge to create, and ideally I'd trade things to other crafts-people, or give things away to people I love or who I know would cherish them. He looked at me quizzically and asked,

…and I really don't think he was trying be malicious or condescending, I think it was a clash of culture. This guy is (I assume) from the United States, and not many people here can fathom spending so much time on something that isn't directly making them money, and there is a tendency to equate success, accomplishment, or skill with how much money you make at what you do.

There is that whole saying: "If you do something you love, then you'll never work a day in your life" which is most likely part of some J Edgar Hoover psy-op to combat everyone doing psychedelics and questioning what was actually meaningful or important to their lives in the 60s.

If that quote was based more on reality instead of "pull-yourself-up-by-your boot-straps" propaganda, it would be more like:

"If you do something you love, eventually you'll start to resent it, and maybe even hate it, because you made your passion into a product, which then doesn't allow you any time to experiment or evolve, and now you are trapped making a bastardized version of this once beautiful thing you liked."

I've lived off of selling the things I've made for a little bit, and not only was it the poorest I've ever been, but I started to Hate wood working, and was ready to quit and start doing ceramics because all of the sudden, I didn't have a creative release. Instead, I got a part time job that covered my cheap rent and expenses, and after a while started wood working again with my four days off of work. I started to like it again. I made whatever popped into my head and I didn't have to worry if there was a market for whatever I was making at the time. There was time and freedom to experiment. When I say I made whatever popped into my head, that doesn't mean it was good; probably half ended up being artisanal firewood, but having time to experiment, and bring ideas into fruition is something I place high value on.

That guy really wanted me to be selling stuff (but didn't want to buy anything), and a lot of people in my life want me to sell stuff (sorry mom and dad, I'm just not very entrepreneurial), and eventually, I will probably need/want to sell stuff, but it is tough to put a price on things, for a myriad of reasons, and I'm a bit scarred by the whole small business approach.

There seems to be this risk, for me anyway, that any time I have to do something, especially on a repeat basis, I will start to resent it, and I don't like resenting things that originally gave me release and joy.

I do occasionally sell my wares, because I have expenses, I don't have infinite storage for the things I make, and I don't think anyone will trade me a house for a bowl, or even a cool Hieronymus Bosch mask.

I don't want to drag any craftsperson for having a business selling their stuff, nor do I want to insinuate that the stuff they are making and selling is soulless and devoid of joy. The main things I'm trying to get at are:

a.) I wish it was more common to prioritize making things and being creative because it is fun, therapeutic and can be a source of joy,
b.) financial goals are way down on the bottom list of priorities in relation to my pursuit of woodworking right now,
c.) selling something doesn't mean you are "good" at something and
d.) even if you aren't "good" at something, doesn't mean you shouldn't still do it and get something positive from it (see item A in the list above).

Our next open studio is 4-6 pm this Friday November 17th, on the second-ish floor of the Betsy Bowen Gallery at 301 First Avenue West in Grand Marais.