Well, it's that time of year on the North Shore. Berries are everywhere! And rain makes applesauce (or maybe blueberry syrup). This means when we are not busy doing intern-y things, chances are we are out on the trail. Or at least I am. 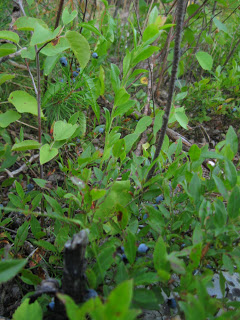 Last week I went blueberry picking for the first time. A crew of us bundled ourselves into the car and drove up to the Seagull Lake area, where the blueberry bushes are abundent from the fire several years ago. After driving quite a ways on what I think I can appropriately call a "rough road," we finally parked and then traversed on foot through brambles and young trees and the very very hot sun. Being a novice picker, I was content to gather all the inpidual berries growing sporadically in the bare, rocky places. Sweated a lot, but the heat was worth it since we ended with a swim in Seagull Lake - my first time in a lake in Minnesota! - and I heard a loon for the first time as well. It was a big day. 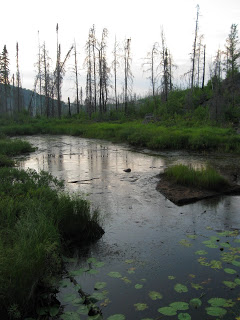 I walked over a blueberry-bush covered ridge, and happened upon this sight.

Not too long after, I had the opportunity to go for a late afternoon blueberry outing to Magnetic Rock. A perfect ending to what was until then a fairly dragging, uneventful day. The air was cool with evening dew, the sun was setting, and I learned that blueberries grow in clusters as well as singly. It was a lovely evening, mosquitos and all, and I got to have blueberry pancakes the next morning for breakfast. 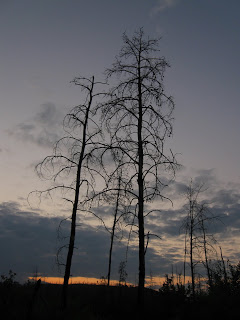 The remnants of forest fire, standing sentinel over the berries.

You may think that that would have been enough blueberry picking for me. But you would be wrong. Tuesday I got to go up to another place near Seagull Lake and pick another quart of blueberries - a combination of clusters and singles - and took my Birch Bark Berry Basket for its inaugural outing. It was very satisfying, but the basket is much larger than an old yogurt container, so I had to tell myself I still picked an adequate amount. I should probably preserve some of this bounty for the winter, though at the rate I'm eating berries they won't last long enough to get into jars. 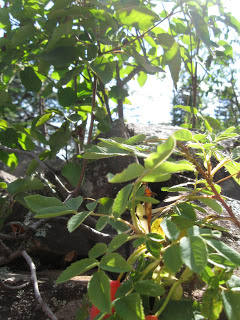 Rosehips and juneberries in the midafternoon sun. 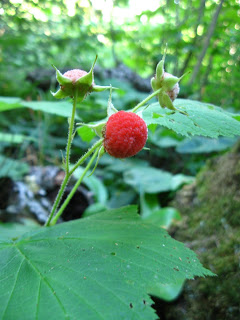 I'm hoping this is a thimbleberry, because I sure ate a lot of them.

And blueberries are not even the only berries out right now. The other day I went for a long wander on the Superior Hiking Trail up near Pincushion and across the Gunflint Trail to...somewhere. I stopped off at the co-op for a sandwich and trail goodies before I left, but there was such an abundance of blueberries, juneberries, thimbleberries and raspberries to snack on I barely was hungry. My first time eating wild juneberries and thimbleberries unsupervised, but I'm still here today so I think I identified them correctly. 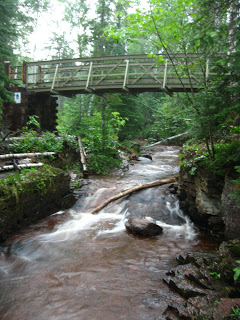 Kadunce River in the rain. 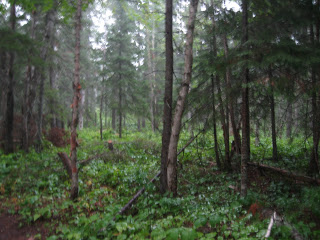 Kadunce foliage in the rain.

I also got to experience summer's other Great Happening a few days ago after work - Thunderstorm Hike. Took a wander on the Kadunce just in time for the rain, then stopped by the Chicago Bay Marketplace for a brownie and coffee afterwards. (I planned ahead and brought dry clothes. Be impressed.) Sat on my new favorite rock on the shore near mile marker 122 and watched the post-storm rainbows and lightning over the lake. 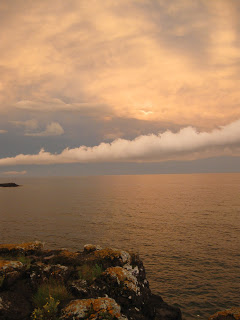 See why this is my new favorite spot?

I think it's safe to say that six months here has allowed me to feel enough like a local that I know at least some of the hot spots and fun things to do. I mean, do you get any better than blueberries and thunderstorms? 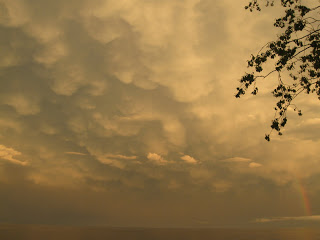