I had the distinct pleasure last weekend to take Dennis Chilcote's Birch Bark Berry Basket class. It was fabulous, and, for me, what being an intern at North House is all about. I would definitely recommend it. If you can't wait til next year for a class with Dennis, he also teaches Handcrafting a Broom Corn Broom in August (which I'm also taking - it promises to be a great time - two of the students in my basket class signed up specifically because they so enjoyed making brooms with Dennis last year). 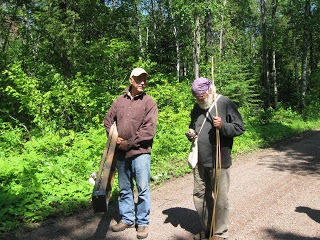 We started out with a field trip into the woods to harvest birch bark (and got to spend some quality time with Minnesota mosquitos while we were at it). 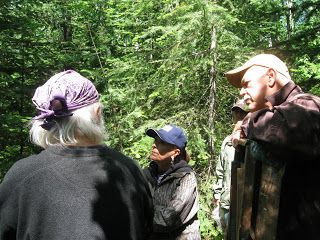 Had some great conversation (and teaching/learning moments!) with students who came from all over the country, some experienced basketmakers, some complete novices. 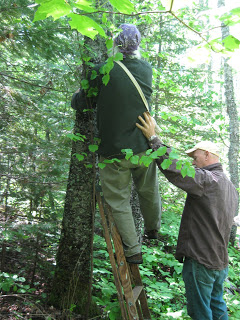 Dennis showed us how to harvest long strips of birch bark - using a ladder, a utility knife, a plastic spatula, and a stick. 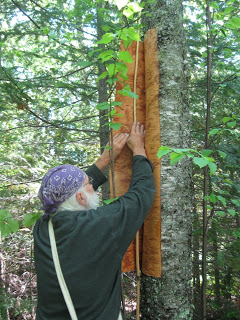 Birch bark is only harvestable when the inner bark and outer bark are willing to peel away from each other - you never want to remove the inner bark from the tree. 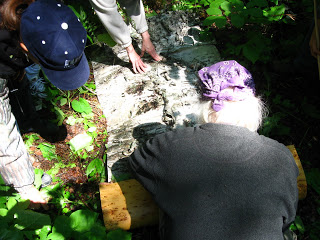 We learned that you want to roll up the bark opposite the way it is inclined to roll itself, otherwise it will be impossible to lay flat again. 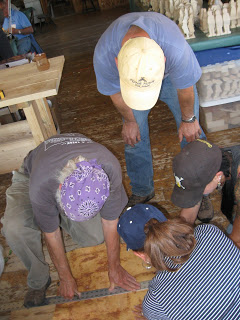 When we got back to campus we laid the bark flat on the floor and cut it to manageable sizes as per our pattern. We also learned that it takes no less than four people to cut a straight line on birch bark. 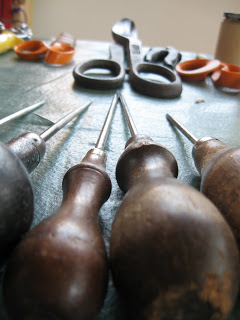 Got to use a variety of shovels, rakes and instruments of destruction - well, more like awls, awls, more awls, scissors and scissors and leathercutters, clamps and carving knives. Lots of fun. 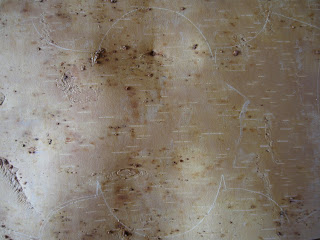 After we got our bark cut out in manageable rectangles we scribed the pattern onto it. 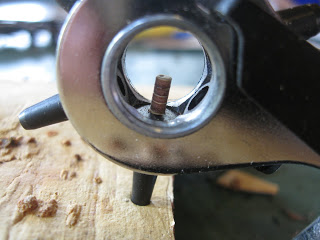 Then we used this nifty rotary awl to cut holes for the stitching - and got these cool little "chads" too. I saved mine for some other project. Not sure what it's going to be, but it's going to be awesome (how it could not, really?). 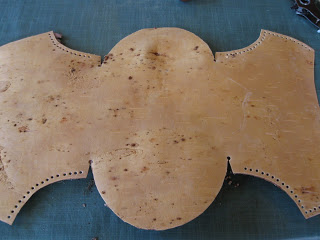 We cut out the exterior holes first... 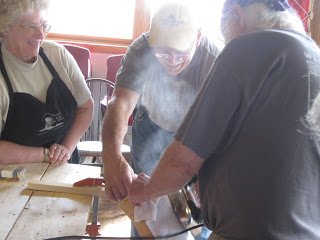 ...then bent the basket into shape using steam to make it more flexible, so we could mark where the interior holes went. 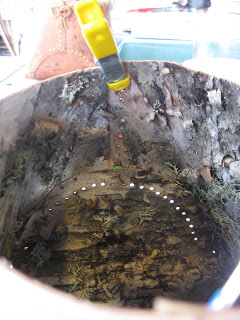 All that light you can see means that my holes aligned properly - you should be very impressed (my work is not usually so exact). 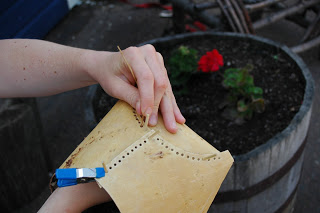 Then we put little dowels into some of the holes to KEEP them aligned while we stitched. It helped to be outside or near the sunlight so you could see where exactly to sew. 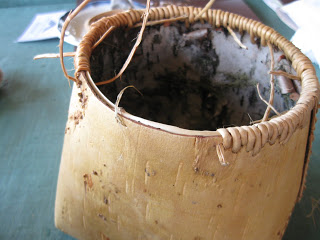 We used spruce and/or jack pine root as the "thread". 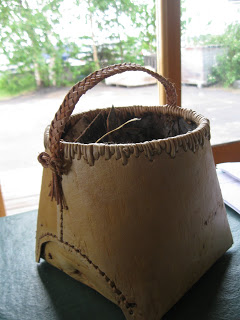 Now to find the berries...