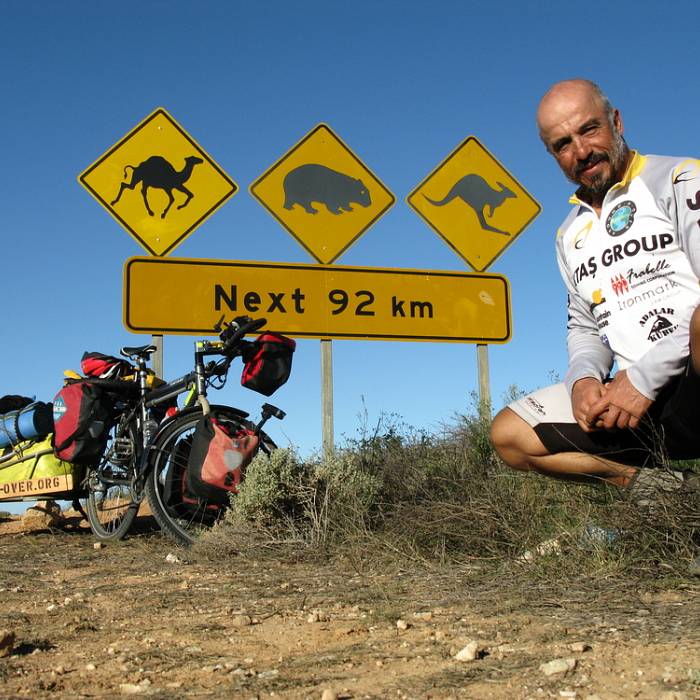 Join Hjordis captian Erden Eruç for a public presentation of his adventures rowing and biking across the globe - literally around the world. 6pm, September 14th in the Boat Barn in on campus in Grand Marais.

Erden Eruç is an accomplished ocean rower, adventurer, USCG Master 50GRT NC and sailing instructor. He holds 17 Guinness World Records, is the recipient of the 2013 Citation of Merit from the prestigious Explorers Club and one of the 2013 Adventurers of the Year – “Nine individuals changing the face of global adventure” by the Outside Magazine. He is already listed in the 2009, 2012, 2014, 2017, 2018, 2021 Guinness Books of World Records.

Erden recently took his rowboat across the Pacific Ocean as the first step in his quest to reach the summits of Everest, Elbrus and Aconcagua by human power. His launch point in June 2021 on this historic crossing was Crescent City in California. After stops at Hawaii then at Guam, he reached Legazpi in the Philippines in March 2022. Once the typhoon season is over and the NE monsoons return, Erden will row across the South China Sea toward Vietnamese shores then bicycle overland to Nepal and beyond.

As an ambassador for Ocean Recovery Alliance, Erden is raising awareness about plastic pollution in The Ocean. He carried a hydrophone until Guam to gather ambient sound data to help a scientific survey of Beaked Whales and Sperm Whales. Holding conference calls with classrooms via satellite phone became an essential part of his mission to inspire the next generation from his rowboat.

Erden is one of the leading ocean rowers in the world today. He holds engineering degrees and an MBA. He is the founder of the Seattle based 501(c)(3) nonprofit Around-n-Over with a mission to educate and inspire children. Human powered journeys are the source of their dispatches from the field. To date, Around-n-Over has raised and applied over $100k toward educational projects.

We offer a broad array of programs for all ages! See all our programs here.

Looking for programs on a specific date? See our program calendar.

Explore our full range of immersive course offerings for the full craft experience.

Subscribe to our eNewsletter to be notified when new programs are available!